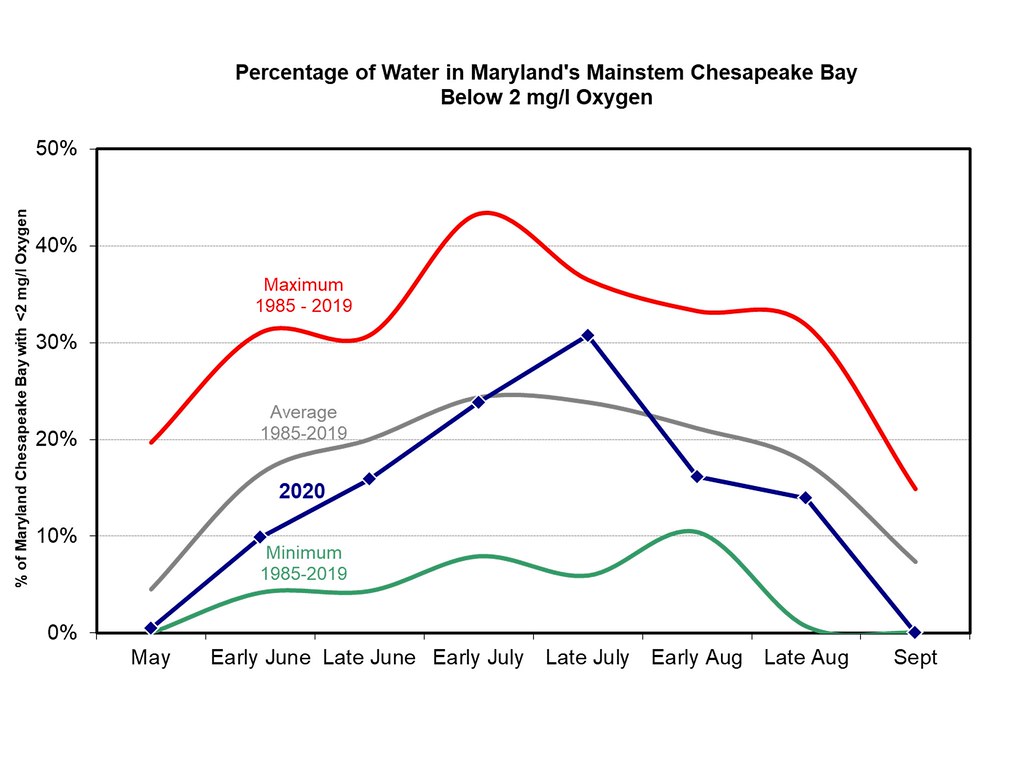 Maryland Department of Natural Resources (DNR) monitoring data show that summer average dissolved oxygen conditions in the Maryland portion of the Chesapeake Bay mainstem were the second best on record since 1985. The average hypoxic volume — areas with less than 2 mg/l oxygen — of the eight 2020 summer cruises was 0.63 cubic miles, compared to a historical summer average from 1985-2019 of 0.84 cubic miles.  Before this year, 2012 was the only year that had a lower average hypoxic volume of 0.62 cubic miles.

During 2020, every cruise except  late July had better than average oxygen conditions for its time period.  No anoxic zones — areas with less than 0.2 mg/l oxygen — were observed in the mainstem bay in either Maryland or Virginia for the year. 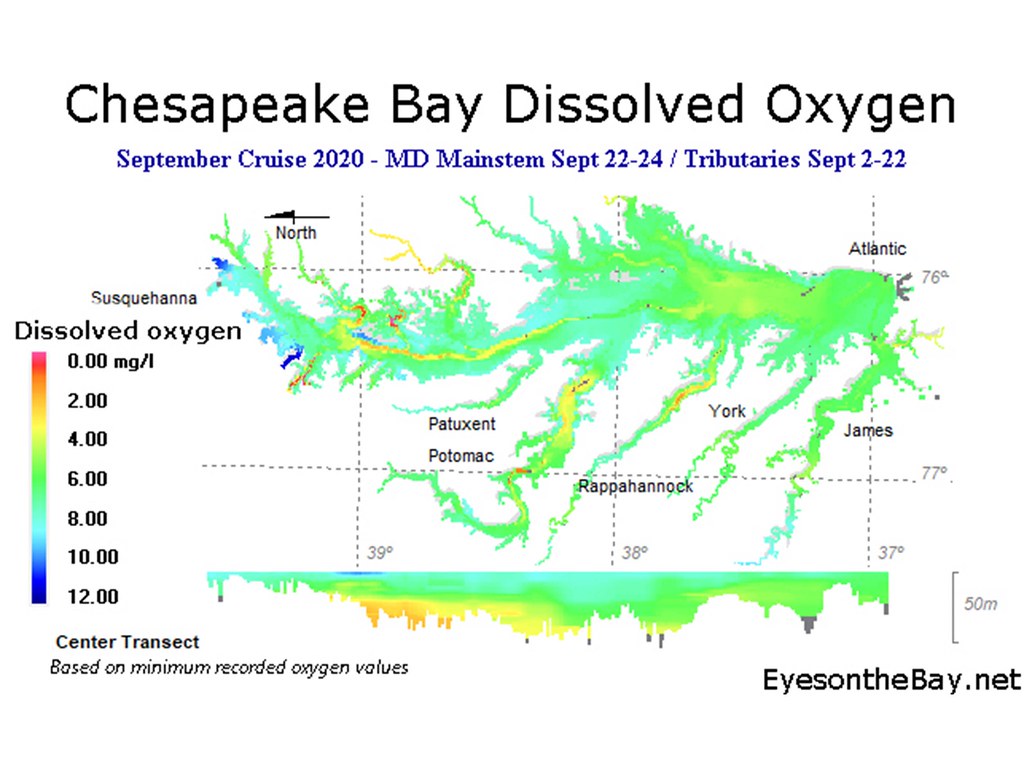 Results of the most recent monitoring cruise conducted in September revealed no hypoxic waters in the Maryland mainstem bay. The September cruise normally occurs mid-month but was delayed a week due to several days of high winds which, along with cool September temperatures, contributed to the dissipation of low dissolved oxygen in deeper bay waters.  Similarly, no hypoxia was observed in Virginia Chesapeake Bay mainstem waters in September.

Maryland’s water quality data can be further explored with a variety of online tools at the Department’s Eyes on the Bay website.

The better oxygen conditions recorded during the summer of 2020 are in agreement with the Virginia Institute of Marine Science 2020 Chesapeake Bay Dead Zone Report, which stated that in terms of total annual hypoxic volume for the full bay, this year the dead zone was smaller than 80% of years since observations began in 1985.

This is also consistent with forecasted results. In mid-June, the EPA Chesapeake Bay Program, U.S. Geological Survey, University of Maryland Center for Environmental Science, and University of Michigan scientists released their prediction for slightly smaller than average 2020 hypoxic conditions based on slightly less than average water and nitrogen flows into the bay during January – May 2020. There are multiple factors contributing to the much better summer bottom oxygen levels in the mainstem of the Bay, one of which is the continued implementation of nutrient reduction strategies conducted by Maryland and the other Bay watershed jurisdictions. 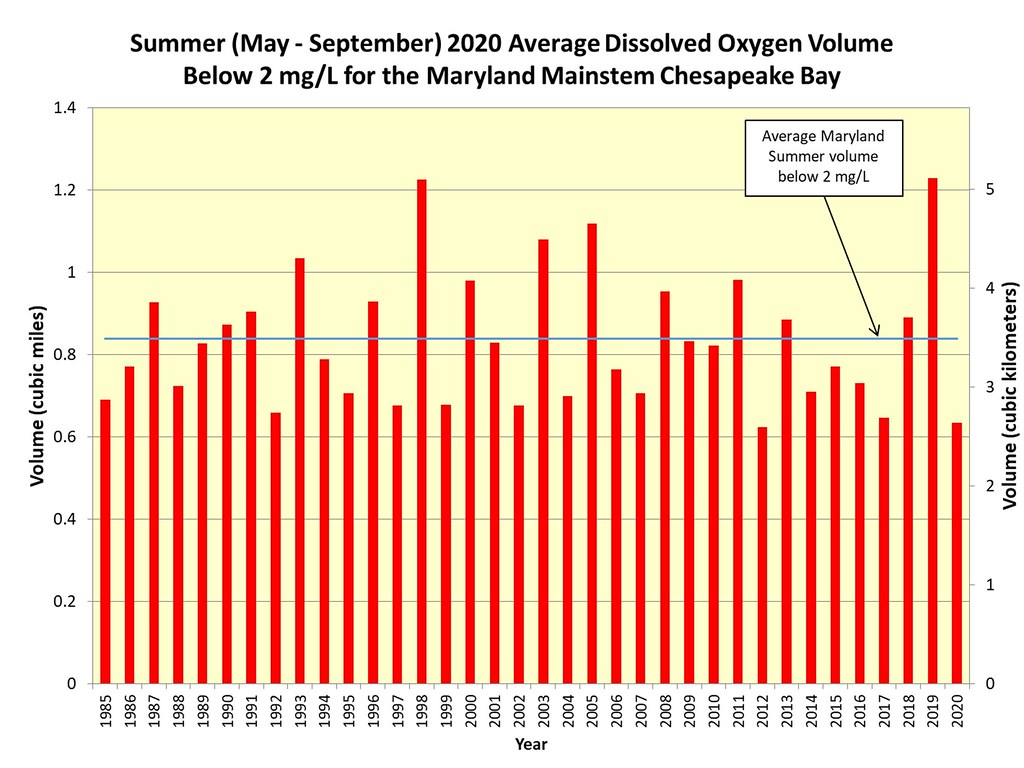 Crabs, fish, oysters, and other creatures in the Chesapeake Bay require oxygen to survive. Scientists and natural resource managers study the volume and duration of bay hypoxia to determine possible impacts to bay life. Each year from May to September, the Maryland Department of Natural Resources computes these volumes from data collected by Maryland and Virginia monitoring teams during twice-monthly monitoring cruises. Data collection is funded by these states and the Environmental Protection Agency’s Chesapeake Bay Program. Bay hypoxia monitoring continues throughout the year.