A Hunter’s Story: My First Shot 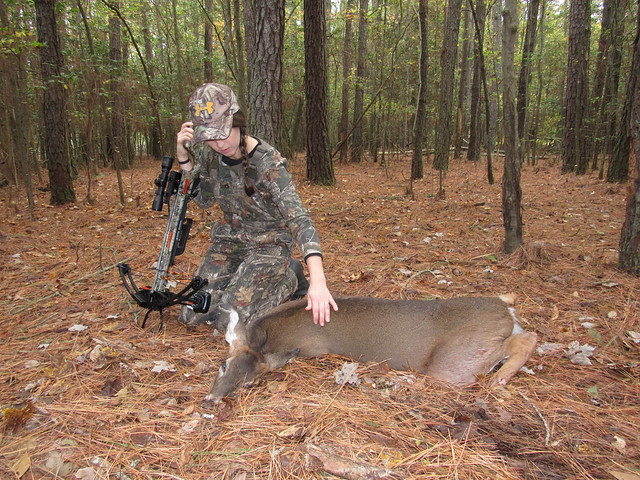 I’ve heard that certain languages have more than 50 words to describe snow. Looking back on my first hunt, I feel like I need a whole new vocabulary to convey my thanks for the entire experience of my first crossbow hunt. Every moment was profound and life changing.

My mentor, Maribeth, invited me to a hunting cabin just south of Cambridge for the weekend. When I arrived Friday after dark, I was welcomed like family by Maribeth and the landowner. The cabin was a hunter’s paradise with a jaw-dropping trophy room, antler cabinet pulls, and an indoor workshop where we could target practice from a full 20 yards. We looked at a map of the property and discussed wind direction and our plan for the next morning’s hunt. The landowner showed us trail camera photos from the preceding week showing the biggest stags and bucks I have ever seen. That night, I lay wide awake like a child on Christmas Eve.

The morning of our first hunt, I ripped the tags off of my newly purchased camo clothing and dressed before dawn. We left the cabin at 6 a.m. and climbed into a box blind in the darkness. I cocked my crossbow, peered out the windows and watched the darkness slowly lift. Shadows became silhouettes, then silhouettes slowly revealed themselves to be trees and logs. Squirrels began to stir in the fallen leaves and the chorus of bird sounds rose from a single chirp. The transformation of the wood at dawn was magical.

Maribeth whispered that it was now light enough to shoot. I played with the rangefinder, calculating the distance of any potential shot. We sat facing a clearing, with the woods to our back. Suddenly, after about a half-hour, three deer approached from the woods behind us. We shuffled and turned around and I brought the big crossbow up to the window. It was a big whitetail doe and two smaller whitetails. The big doe stepped behind a fallen tree. One of the smaller deer, with a beautiful dark dorsal stripe and black tipped ears, approached and stood broadside at about 26 yards. Everything about the shot felt right. I whispered to Maribeth, “If I take this shot, can we still hunt tonight?” She smiled and nodded. I took the shot.

We waited anxiously in the blind before heading down to inspect the arrow. I just prayed that my shot was good and that the deer was not suffering. When we arrived at the kill site, the arrow was clean and there was dark blood. We stayed at the kill site and peered through the binoculars at the surrounding forest. Then, Maribeth spotted a dark shape on the forest floor. We followed the blood trail, which progressively became a brighter shade of reddish pink and increased, step by step. What Maribeth had spotted was my deer, down within about 80 yards.

In that moment, I felt awe, love, gratitude, relief, and pride all mixed together in a way that was entirely new. I stared down at this perfect animal, listening to stags bugle in the distance, totally immersed in the experience. 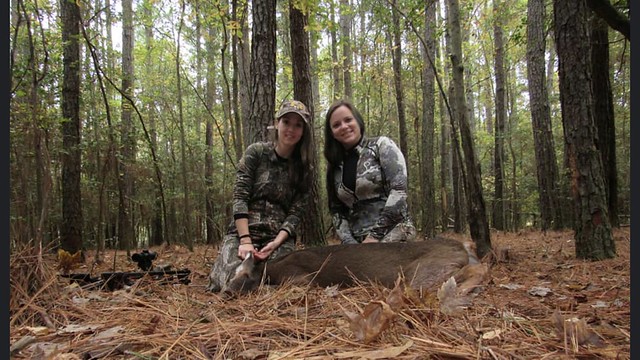 Sara and her mentor Maribeth with the downed deer

I pulled that perfect little deer out of the woods myself. I felt like a child, taking on a task too big for me, but determined to accomplish it, regardless. Maribeth walked patiently beside me, carrying our gear. We got back to the cabin and began field dressing the deer. My shot had been well placed, but the deer must have been slightly quartering towards me, so the trajectory of the arrow angled back towards the stomach, rupturing it. It’s a lesson I’ll never forget.

That evening we went back out to the same stand before dusk and waited for night to sink in around us. Two small deer came into the clearing to feed about 20 yards away. I was totally mesmerized, watching these two feed and interact for over an hour. Then, a big buck pranced into and across the clearing, about 60 yards away. He was puffed up and moved with a purpose. And in that moment, I understood the unexplainable thrill and allure of a big buck. My heart pounded as he crept up toward the clearing to check out the two smaller deer in front of us. He moved back into the woods and disappeared, never giving me a shot. I sat in complete awe of that buck, shocked at the effect just those few moments in his presence had on me. If I had a shot I would have taken it, but I felt no hint of disappointment.

We went out the next morning for one last hunt as rain was moving in. We watched the woods wake up, listened to the rain fall, and chatted in soft whispers. Hours passed and we watched two raccoons for a while before deciding to head back. We were closing up the windows to the box blind when we saw a little gray tree frog in one of the window wells. Maribeth spent five minutes corralling and shooing this little frog out the door to avoid trapping him inside.

During my final day, we set about the task of butchering my deer. I don’t know any hunters that take on the tedious task of breaking down and packaging an entire animal, but Maribeth encouraged me to rise to the challenge. She stood with me for hours as we meticulously peeled threads of silver skin from the meat. I was proud to bring this food home to feed my family, from start to finish.

As I left, my heart was full. I watched a bald eagle—the first one I had ever seen—flying against the blue sky. I teared up thinking that if I had left this experience with only that—or any of those individual moments I described—it would have been enough. But it was all just indescribably more.

Sara Rutledge is a nurse in a Baltimore area hospital and a participant in DNR’s First Shot Mentored Hunt Program. Article appears in Vol. 23, No. 3 of the Maryland Natural Resource magazine, fall 2020.