Maryland Fire Crew Mobilized to Combat Wildfires in the Rockies 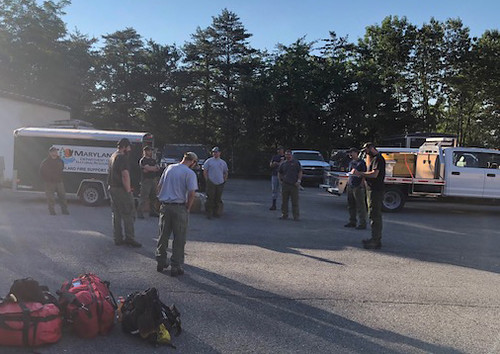 Maryland has dispatched a 10-person fire crew module to battle wildfires in the Rocky Mountains. Maryland State (MDS) #1 mobilized July 15 at the Green Ridge Fire Center in Allegany County. The unit arrived early Friday at Rocky Mountain Mobilization Center in Cheyenne, Wyo., and will deploy to Rawlins, Wyo., for the initial attack on a wildfire.

The National Interagency Fire Center is the nation’s support center for wildland firefighting. The Maryland Forest Service has participated in mobilizing wildland firefighters throughout the U.S. since 1974, as part of a cooperative agreement with the U.S. Department of Agriculture Forest Service. Other partners in this nationwide group include the National Park Service and the U.S. Fish and Wildlife Service.