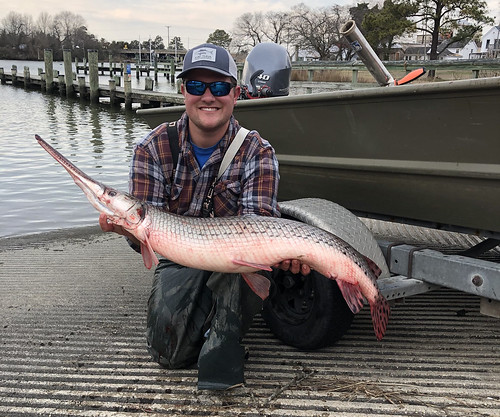 A Hurlock fisherman is the new Maryland state Chesapeake Division record holder for longnose gar, with a catch that weighed 18.3 pounds.

Samson Matthews, 22, was fishing for blue catfish with a friend March 2 near El Dorado Bridge along Marshyhope Creek. After about 10 minutes of fishing  in 20 feet of water with small chunks of gizzard shad as bait, Matthews felt a strong pull, a tight line, and lots of thrashing.

“I didn’t even know what it was at first,” Matthews said. After pulling the fish into the boat, both anglers knew they had a potential record breaker.

Maryland Department of Natural Resources biologists certified the species as longnose gar — Lepisosteus osseus — a prehistoric fish distinguished by its long nose and hard scales. The catch was officially weighed at Kool Ice and Seafood in Cambridge, which confirmed the fish narrowly beat the 2019 record held by David Confair.

After the weighing, Matthews released his record longnose gar back into Marshyhope Creek.

Anglers who think they have a potential record catch should fill out the state record application and call 443-569-1381 or 410-260-8325. The department suggests the fish be immersed in ice water to preserve its weight until it can be checked, confirmed, and certified.