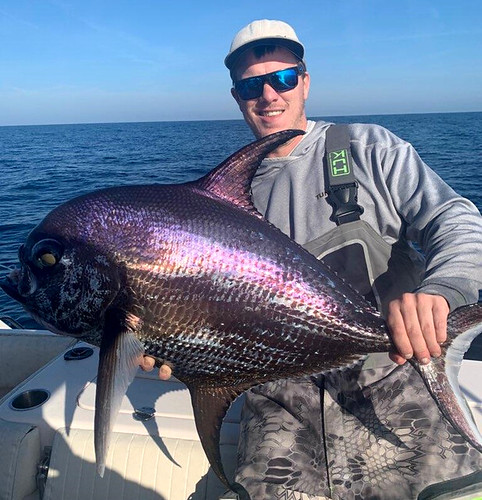 The Maryland Department of Natural Resources has officially recognized Jeff Rosenkilde of Monkton as holding the first official state fishing record for big-scale pomfret. Rosenkilde caught the 22.1-pound fish Dec. 28 in the Atlantic Ocean canyons off the coast of the Delmarva peninsula.

Rosenkilde and four friends were deep-drop fishing for swordfish and tuna out of Ocean City, about 75 miles offshore, when he knew something took his whole squid bait nearly 1,000 feet below the surface.

“The fish started fighting,” the 33-year-old life-long angler said, noting it took nearly 15-20 minutes to reel in the catch. “At first I thought it was big-eyed tuna, but it had a purple, iridescent color.”

Rosenkilde said his crewmates knew the species and knew it was exceptionally large. Rosenkilde credits his new record as as a group effort.

A department biologist verified the species as a big-scale pomfret — Taractichthys longipinnis. Its weight was certified by Hunter’s Crab and Seafood Market in Grasonville.

The big-scale pomfret is commonly found in the warm waters of the Atlantic Ocean and Gulf of Mexico, but occasionally moves northward.