Explore the Life of America’s Soldiers Through History 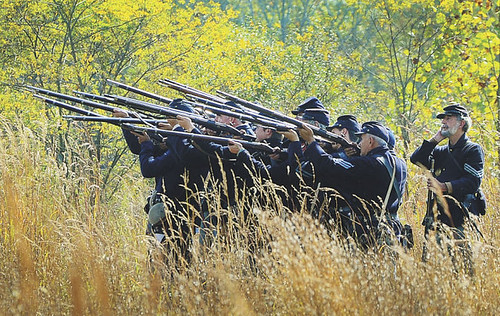 Historic Fort Frederick State Park offers visitors a look at life in the fort this Veterans Day weekend as volunteers exhibit the varied roles the fort played during the French and Indian War, the American Revolution, and the Civil War. Events run 10 a.m. to 5 p.m. on both Saturday and Sunday.

The program takes a deeper look at the uses of the fort and the roles of the people serving in the wars that shaped our nation. Highlights of the weekend will include live firing of vintage 18th and 19th century weapons, demonstrations of percussion vs. flintlock firing, volunteer company drills, and demonstrations of life of the soldier at Fort Frederick from 1756-1865, including a look at 18th century medicine, soldiers’ rations of the two centuries, and more.

Originally built by Maryland Governor Horatio Sharpe to protect the frontier during the French and Indian War, his decision to build it of stone made it a lasting monument — and a reusable resource. Twenty years later, George Washington ordered the fort to be turned into a prison camp, which housed thousands of British prisoners during the American Revolution.

By the Civil War, the fort was in ruins and used as farmland, but with the proximity of the canal and railway, Union troops would often camp there to protect supply lines from Confederate raiders.

“Though Fort Frederick isn’t famous for battles or a courageous last stand, its reuse throughout history for such a variety or reasons makes it unique,” said Matthew Wedd, historical interpreter at Fort Frederick State Park. “Activities and living history will give visitors a look into the small heroics of history – the daily lives of the people who served throughout these much larger conflicts.”

In addition to programs, the park’s visitor center has exhibits about Fort Frederick’s history, including artifacts and a 10-minute video.