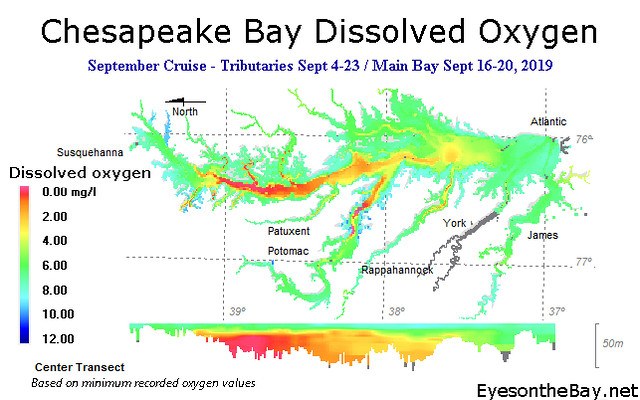 Maryland Department of Natural Resources monitoring data show that dissolved oxygen conditions in the Maryland portion of the Chesapeake Bay mainstem were higher than average in September. The hypoxic water volume — waters with less than 2 mg/l oxygen — was 0.73 cubic miles in September, down from the 1.06 cubic miles seen in late August, but greater than the historical 0.41 cubic mile average for September. No anoxia — waters with less than 0.2 mg/l oxygen — was detected. This ranked as the fifth-largest Maryland September hypoxia volume since monitoring began in 1985.

Overall, summer 2019 ranked as the third-worst average Maryland hypoxia volume calculated from monitoring data. Only 1998 and 2005 ranked above it, and 2003 was a close fourth. Monitoring results match the forecast prediction from early summer by the National Oceanic and Atmospheric Administration, United States Geological Survey, University of Maryland Center for Environmental Science and University of Michigan scientists. Their forecasting predicted 2019 would have the fourth-worst hypoxia seen in the past 20 years for the Chesapeake Bay. Predictions were based on higher flows last fall and this spring, which produce higher nitrogen loading from the Susquehanna and Potomac Rivers that in part determines the extent and duration of hypoxia. 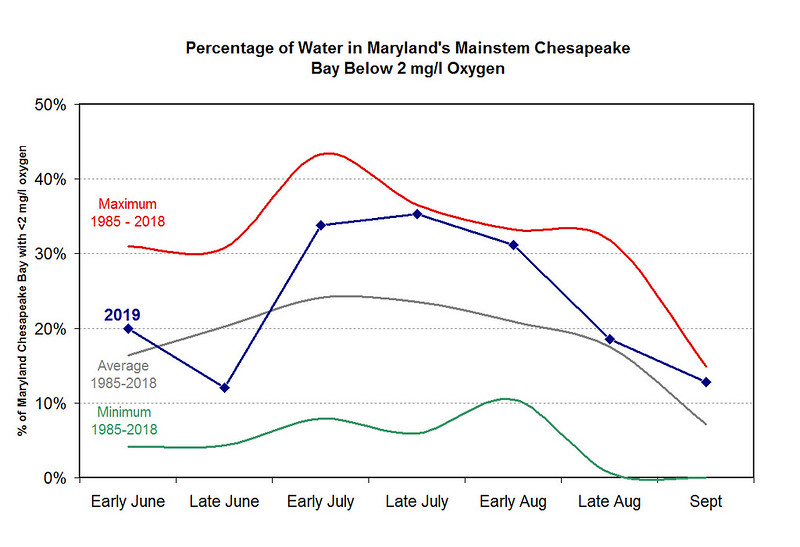 Crabs, fish, oysters, and other creatures in the Chesapeake Bay require oxygen to survive. Scientists and natural resource managers study the volume and duration of bay hypoxia to determine possible impacts to bay life. Each year (June-September), the Maryland Department of Natural Resources computes these volumes from data collected by Maryland and Virginia monitoring teams during twice-monthly monitoring cruises. Data collection is funded by these states and the Environmental Protection Agency’s Chesapeake Bay Program.

Bay hypoxia monitoring and reporting is conducted every summer, June through September. Generally, hypoxia is not observed on a large scale in mid-October as waters cool and weather systems mix oxygen into deeper waters.