The units that make up today’s Department of Natural Resources mostly date back farther than 1969, many having gone through numerous names and structural changes before and even after becoming part of the department. 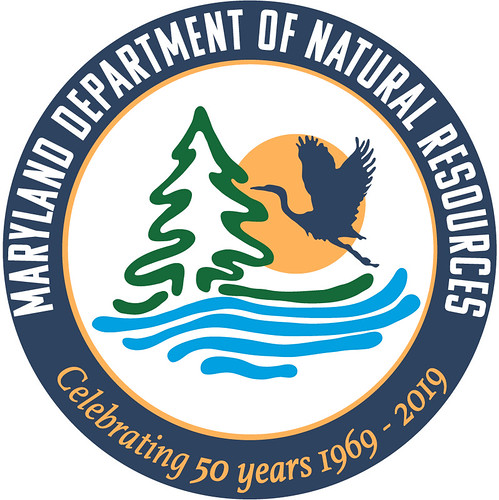 The earliest version of what is now a Department of Natural Resources function is the Maryland Geological Survey, which originated with a brief tenure from 1834-41 and resumed activity in 1896.

The oldest continuing unit is the Maryland Natural Resources Police, which was organized as the State Oyster Police force in 1868.

The Resource Assessment Service began work with the State Fish Commission in 1874. Our modern Fishing and Boating Service and Wildlife and Heritage Service both are direct descendants of the State Game Warden pro-gram begun in 1896.

Maryland state parks and forests jointly trace their roots to the Board of Forestry, established in 1906. Most of today’s state parks were established between 1945 and 1975.

The department wasn’t the first statewide agency charged with the task of protecting natural resources, but it was the first cabinet-level department overseeing conservation.

The 1960s saw a quick expansion of local, state and federal efforts to protect, preserve and enhance our natural resources. The following timeline shows key developments in the establishment and development of the Maryland Department of Natural Resources. This chart is a simplified depiction of the predecessors of the department. 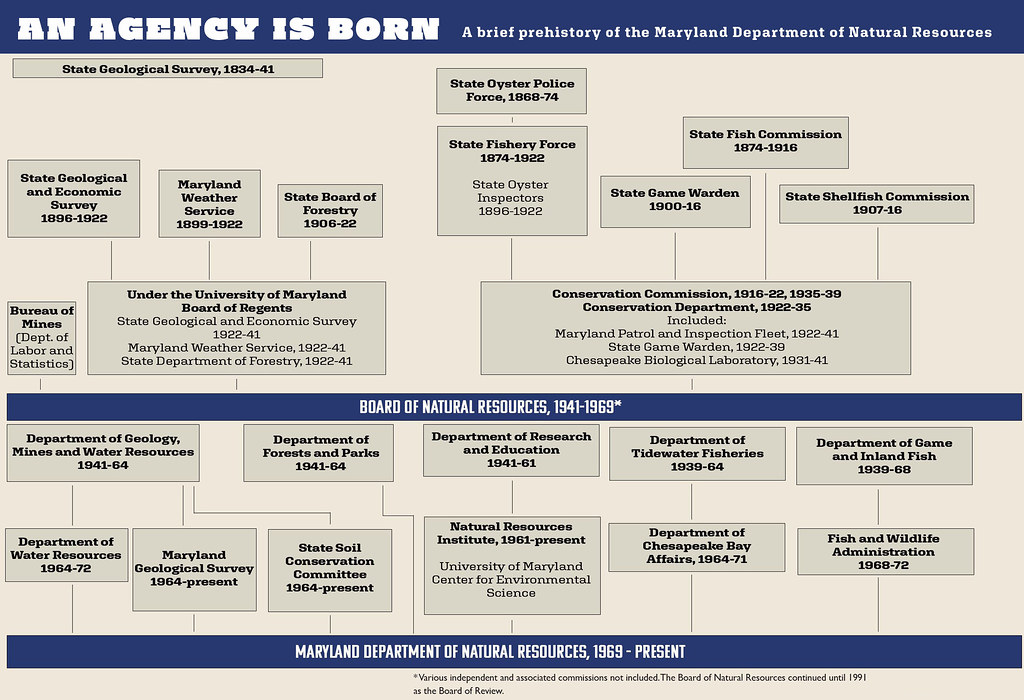 Program Open Space (POS), a nationally recognized program providing dedicated funds for Maryland’s state and local parks and conservation areas, is established. Program Open Space is managed by the Department of Forests and Parks until 1972.

An act of the Maryland General Assembly creates the Natural Resources Police by combining the Marine Police and the Wildlife Law Enforcement Division.

1972: The former Department of State Forests and Parks is split into three distinct agencies, the Maryland Forest Service, the Maryland Park Service and the Capital Programs Administration (predecessor of today’s Land Acquisition and Planning and Engineering and Construction units). 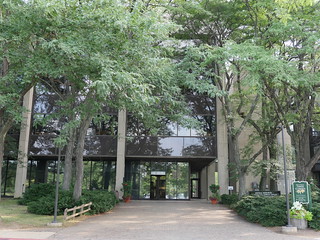 The brand-new DNR building at 580 Taylor Ave., Annapolis, is dedicated in honor of former Secretary J. Millard Tawes. To this day, Tawes State Office Building is the department’s headquarters.

1976: After a new law requires hunters to be certified in firearms competency to get a license, the department begins its Hunter Safety Education program.

1977: The Helen Avalynne Tawes Garden is dedicated in Annapolis. Named after the former first lady of Maryland, the five-acre garden represents the state’s geographic areas.

1983: The governors of Maryland, Virginia and Pennsylvania; the mayor of the District of Columbia; and the administrator of the U.S. Environmental Protection Agency sign the Chesapeake Bay Agreement of 1983 and the Chesapeake Bay Program was formed.

1984: Program Open Space mascot Woody Duck catches a lift on the Space Shuttle Discovery Mission STS 51-A with five other astronauts. The department still prizes a patch that went into space with our traveling waterfowl.

The Maryland Conservation Corps is approved by the Maryland General Assembly as one of 13 initiatives of the Chesapeake Bay Program.

The first seven miles of the Northern Central Rail Trail, Maryland’s first rail trail, opens to the public. It is completed to the Pennsylvania line five years later and named after Secretary Brown.

Maryland creates the Chesapeake Bay Critical Area Protection Program, a far-reaching effort to manage future land use development in the Chesapeake’s watershed. Today managed by the department’s Critical Area Commission, it remains a unique partnership of state and local government.

1988: A pilot blue crab winter dredge survey is conduct-ed with the cooperation of the University of Mary-land Chesapeake Biological Lab. The next year, the Virginia Institute of Marine Science joined the survey, which has been conducted every year since and re-mains the standard bay-wide effort to estimate the number of blue crabs living in the Chesapeake Bay.

1993: The Maryland Biological Stream Survey is started by the Maryland Department of Natural Resources in 1993 as a pilot study in three watersheds.

1994: Two graduate students from the University of Maryland – Michelle Bennet and Gil Funk – offer to create a webpage for their favorite state park. Recognizing the importance of the internet, the department embraced their offer and works with them to create a 36-page website promoting the Maryland Park Service.

1995: By March 1995, DNR launches the first website in Maryland state government history. At that time, it was only one of about 16,000 websites in the world. World Wide Web naming conventions hadn’t been invented yet. The domain name was gacc.com:82.

1999: Maryland certifies its first Clean Marina, the first program of its kind in the nation.

2002: Maryland’s state tree, the 500-year-old Wye Oak, collapses during a severe thunderstorm on June 6. At its end, the tree measured 31 feet, 8 inches in circumference, was 96 feet tall, had an average crown spread of 119 feet, and weighed more than 61,000 pounds. The department would continue offering seedlings from the historic tree for sale; a true genetic clone of the Wye Oak was planted in its place in 2006.

2004: Maryland conducts its first black bear hunting season in 51 years. After decades of research and population monitoring, DNR determines the need to control population growth in the far western counties.

2005: The Maryland Forest Service and Maryland Park Service branch out into individual units, as they remain today. Both celebrated their 100th anniversary in 2006.

2011: The Chesapeake and Coastal Service, formerly known as Watershed Services, flows into existence.

2013: The AccessDNR mobile app for the iPhone was first introduced in December 2013, and the Android version followed a few months later. Currently, more than 80,000 people are using the app, which provides on-the-go information and services for outdoor enthusiasts.

2016: Fishing and Boating Services embarks in its current structure.

Hanging out with Splash the Water Safety dog at an Es Mi Parque event; by Donna Seymour

2017: Partnering with the Governor’s Office of Community Initiatives and Governor’s Commission on Hispanic Affairs, DNR debuts a new citizen outreach program, “Es Mi Parque,” or “This is My Park,” providing information and services to Spanish language speakers – the fastest-growing population of park-goers – and increasing awareness of state conservation laws and regulations and boating, fishing and water safety.

2018: The department becomes the first state agency to offer services as an Alexa skill on Amazon Echo. Anglers can use the new skill on an Amazon device by saying “Alexa, open the Maryland Fishing Report.”

The annual survey of Chesapeake Bay submerged aquatic vegetation records 104,843 acres of underwater grasses baywide — exceeding 100,000 acres for the first time since surveys began in 1984. Record rainfall would cause a minimal decrease the following year, proving the grasses’ resilience.

The fourth phase of the Western Mary-land Rail Trail opens, completing nearly 30 years of work. The trail is now 26 miles in length.

The long-planned removal of the derelict Bloede Dam in Patapsco Valley State Park is completed, and the river runs free for the first time in a century.

Timeline compiled by Gregg Bortz, Media Relations Manager with the Office of Communications. Appears in Vol. 22, No. 3 of the Maryland Natural Resource magazine, summer 2019.