From the Field: Biologist Brooke Landry 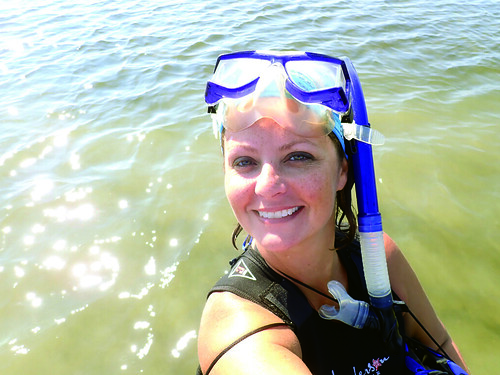 Brooke Landry’s passion for biology started early. “I was a little science geek,” she laughs.

Her interest in underwater grasses really picked up as she snorkeled around coral reefs and beds of seagrass on a middle school class trip to Belize. A few undergrad summers spent studying salt marshes on Maryland’s Eastern Shore immersed her in the wonders of bay life, and she went on to specialize in coastal habitats for her University of Virginia environmental science degree. Landry then worked on a long-term habitat assessment project off the southern tip of Florida during her graduate studies.

Now, having returned to her Chesapeake Bay roots as an underwater grasses biologist with the Maryland Department of Natural Resources, she focuses on the health of the bay’s submerged aquatic vegetation (SAV) and chairs the Chesapeake Bay Program’s SAV Workgroup.

Landry spends her summers on the bay, where her work varies from research to restoration to outreach. As beds of underwater grasses bloom northward up the bay from May through September, she and her colleagues strap on snorkels and masks to monitor SAV health and assess species diversity.

This summer, one project has her working along the shoreline of Smith Island, where she and her colleagues are monitoring SAV health after a major shoreline protection project was installed in 2015. A lot of the team’s monitoring work is related to shoreline alteration projects, checking up on how armored shorelines, reinforced with seawalls and breakwaters, may affect SAV habitat offshore.

Landry also works closely with river-keepers and other local watershed groups to monitor underwater grasses. She led the development of the new Chesapeake Bay SAV Watchers monitoring protocol, which is available for the first time this year to citizen science groups (check out chesapeakebaysavwatchers.com). 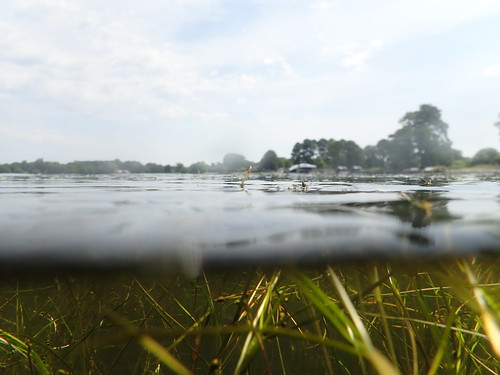 “Throughout summer, but especially during peak abundance, trained volunteers will conduct grass surveys by boat, kayak and even paddleboard,” says Landry. The imagery from annual aerial surveys can reveal the locations of SAV beds from afar, but Landry and other SAV biologists rely on citizen scientists’ data sets to find out which species, like wigeon-grass and eelgrass, are living in certain areas.

Species diversity is important for SAV resilience; each grass species has a particular range of temperature, salinity and water clarity preferences. “So in a healthy, resilient system, even if conditions are off for one species, other species may still be able to thrive” – and play important roles in producing food and oxygen, providing habitat and collecting nutrients and sediment from the water, Landry explained.

The Chesapeake Bay annual SAV survey shows that bay grass acreage grew steadily from 2012 through 2017. This was great news, indicating overall cleaner bay waters. However, the monumental rains and resulting “muddy mess” of 2018 put a damper on grass growth, as total observed SAV bed area in the bay fell from 105,000 to 91,559 acres in a year. Part of this decrease is due to the fact that muddy waters prevented mapping of a number of tributaries last year.

Landry and her colleagues are anxious to know if last year’s grasses were able to reproduce, even as the plants expended valuable energy trying to survive in murky conditions caused by muddy rivers.

She’ll know soon, as she once again dons her snorkel and jumps into summer surveys.

Article by Annalise Kenney, Publications and Design Manager with the Office of Communications. Appears in Vol. 22, No. 3 of the Maryland Natural Resource magazine, summer 2019.