Back from the Brink: Once Almost Extinct in Maryland, Three Species Survive! 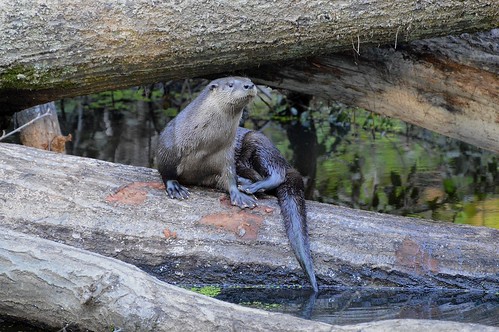 In terms of wildlife, with many species predating the time humans arrived on the scene, 50 years may not seem like a long time.

But as the Maryland Department of Natural Resources celebrates our 50th anniversary this year, we can look back on the Maryland of 1969 and see that significant changes took place.

The year of our founding was a simpler time, but also a challenging time for wildlife species – one in which there were no river otters in western Maryland, wild turkeys were reduced to a fraction of their original numbers statewide and Maryland black bears were merely a tall tale. But through a lot of hard work and dedication, we’re happy to report that these species now star in some of Maryland’s greatest wildlife conservation success stories.

Wild Turkey
According to early accounts, wild turkeys were abundant and welcomed as food when European settlers began arriving in Maryland. In his 1666 work “A Character of the Province of Maryland,” George Alsop wrote: “… the Turkey, whom I have seen in whole hundreds in flights in the Woods of Mary Land [sic], being an extraordinary fat Fowl, whose flesh is very pleasant and sweet.”

Although Lord Baltimore opened land west of the coastal plain to settlement in 1732, the forest habitat of wild turkeys re-mained relatively undisturbed until the late 1700s, when major expanses of forest were clear-cut to produce charcoal for iron furnaces. Later, with the invention of the steam engine and the development of railroads in the early 1800s, previously inaccessible forests in western Maryland were opened to timbering. In the decades that followed, under the growing demand for wood and wood products, much of Maryland’s timber was cleared.

With unrestricted hunting and timber cutting, turkey populations declined, along with many of the other forest wildlife species that shared their habitat. By the early 1900s, only a remnant of Maryland’s once abundant wild turkey flocks remained, causing state game warden, F. Lee LeCompte, to conclude that Maryland’s wild turkeys, outside of a few sections in the western counties, were “practically extinct.” 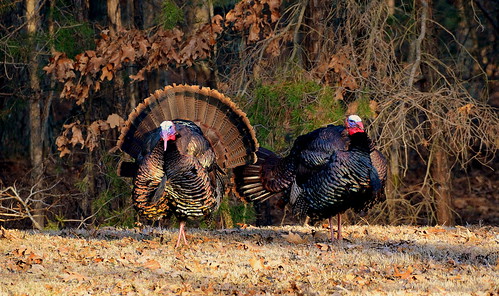 Concern over low turkey populations resulted in a prohibition on turkey hunting in Garrett County from 1920 to 1933. In 1925, Maryland initiated a program to re-store wild turkeys by buying and releasing pen raised turkeys into the wild. In 1930, the state established its own turkey farm, raising and releasing nearly 33,000 turkeys into the wild between 1930 and 1971. Two of those original game farms are now Billmeyer and Gwynnbrook wildlife management areas, both administered by the Department of Natural Resources.

Various techniques were tried in hopes of producing pen-reared birds that exhibited all the characteristics of a truly wild turkey. Wild stock was obtained from several states, as well as from the Woodmont Rod and Gun Club near Hancock, to improve the genetic quality of the game farm turkeys. Wing-clipped hens were mated with wild gobblers in an effort to instill more wild qualities in the offspring. Despite these and other efforts, game farm releases were not successful in establishing wild turkey flocks in Maryland. Determined to be expensive and not effective, the game farm program was abandoned in 1971 in favor of the trap-and-transplant approach.

The success of the trap-and-transplant program depended on the rocket net, a device invented and perfected in the 1950s. It consists of a large net that is shot over feeding turkeys by means of explosive charges contained in metal projectiles attached to the net. The explosive charges propel the net over the feeding turkeys. Birds trapped by the net are removed, tagged and transported to a designated release site.

The rocket net made it possible, over a period of time, to obtain wild birds in sufficient numbers to reintroduce turkeys into every county in the state. When the trap and transplant program began, wild turkeys were found only in Garrett, Allegany and Washington counties. By the late 1960s, wild turkeys, probably expanding from populations in northern Virginia, had also become established in southeastern Frederick County and western Montgomery County.

The rocket net was used for the first time in Maryland in 1967 to capture wild turkeys in Garrett County for release in Frederick County. This original transplant was successful in establishing a wild turkey population in northwestern Frederick County, but for unknown reasons, similar releases of small numbers of turkeys during the late 1960s and early 1970s in eastern and southern Maryland failed.

A more intensive effort to reestablish wild turkey populations throughout Maryland began in 1979 in Calvert County with releases of wild birds captured at sites in western Maryland. Following the successful introduction in Calvert County, a total of 1,236 wild turkeys, captured by rocket nets, were released on 70 sites around the state between 1979 and 2009. The restoration effort was primarily funded with revenue from hunting license sales and Pittman-Robertson federal funds. The National Wild Turkey Federation and private landowners also provided support for various aspects of the successful project.

As recently as 1970, fewer than 1,000 wild turkeys lived in Maryland. Today, the state is home to an estimated 40,000 birds, which occupy available habitat in every county. Turkey populations in the western and eastern parts of Maryland have stabilized, but southern and central region populations continue to grow. As turkey populations have grown, interest in turkey hunting has increased as well, especially in the spring season when approximately 10,000 hunters pursue these magnificent birds annually.

River Otter
River otters are semi-aquatic furbearers that can now be found statewide. They enjoy the healthiest wetland systems in Maryland and can be found in those areas ranging from mountainous trout streams to tidal marshes. River otters feed on fish, crustaceans, mollusks, amphibians, reptiles and other small animals.

During the 1800s, otters had been extirpated from Garrett, Allegany and Washington counties. Unrestricted hunting and trapping played a role in the otter’s population decline, as did changing land uses and settlement in more rural parts of the state.

Prior to 1990, river otters were distributed at varying densities throughout the state, with the exceptions of Garrett, Allegany and western Washington counties. During the early to mid-1990s, the Department of Natural Resources conducted a project to reintroduce river otters to the mountainous portions of western Maryland. Otters were trapped from resident populations on the Eastern Shore by department staff and volunteers from the trapping community. The otters were then flown by plane, courtesy of the Natural Resources Police, to western Maryland, where they were transported to appropriate release sites. The initial project focused its efforts on the Youghiogheny River drainage in Garrett County, but subsequent releases also occurred in smaller drainages within the county.

After self-sustaining, viable populations had been restored in Garret County, efforts were shifted to Allegany County.

As a result of successful reintroduction efforts, river otters are now distributed statewide. The highest population densities occur in the coastal plain adjacent to the Chesapeake Bay. Proceeding westward from the bay, population densities decrease incrementally until they reach their lowest level in Allegany County. Overall, populations in western Maryland have increased dramatically since reintroduction efforts were initiated. Garrett and Allegany counties now have a healthy, sustainable population. 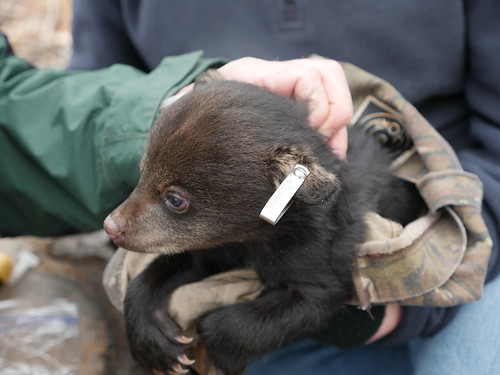 Juvenile bear is tagged during den survey; by Stephen Badger

Black Bear
The black bear is the largest terrestrial mammal native to Maryland. Adult female bears average about 200 pounds but may get as large as 300 pounds. Some adult male bears will exceed 600 pounds, although most will attain a weight of 250-400 pounds. Currently, Maryland has a resident breeding black bear population in the four westernmost counties (Garrett, Allegany, Washington and Frederick), although bears can be spotted moving through other areas of the state, particularly in the spring and summer months when juvenile bears are ‘dispersing’ – trying to find territory of their own.

Black bears were once distributed statewide because of the excellent habitats provided by Maryland’s native woodlands, meadows, swamps and coastal plain. However, the black bear population suffered mightily as European settlers colonized Maryland.

The quality of Maryland’s forests declined as early settlers harvested timber and cleared land for agriculture throughout the seven-teeth and eighteenth centuries. As a result, the quality of bear habitat was also greatly degraded. In addition, settlers considered bears to be a threat to their own existence and treated them as vermin. In fact, in the mid-1700s, a bounty encouraging people to kill bears was established in Somerset and Worcester counties. Bears were indiscriminately killed throughout the 1800s and into the early 1900s. Such culling, combined with large-scale habitat loss through uncontrolled timber cutting and a lack of conservation laws, eliminated black bears and other forest wildlife species from many parts of the state.

By the mid-1960s, the black bear population was nearly extirpated, restricted to the more remote mountainous areas of Allegany and Garrett counties. In 1972, the status of the black bear was changed from that of a “forest game” animal to being listed on the state “endangered species” list.

Through conservation action, Maryland’s bear population has since rebounded from these historical lows. Improving habitat conditions in the mid-Appalachian region have allowed bear populations to slowly grow in Maryland and neighboring states.

In response to the growing bear population, a conservative bear hunting season was implemented in Garrett and western Allegany counties in 2004. Since then, the hunting area has been expanded to include all four western counties and the population has continued to grow. This region of the state is now home to more than 2,000 adult black bears.

Article by Nancy Doran, Information and Education Program Manager for the Wildlife and Heritage Service. Appears in Vol. 22, No. 3 of the Maryland Natural Resource magazine, summer 2019.