Ask an Expert: Earthquakes in Maryland 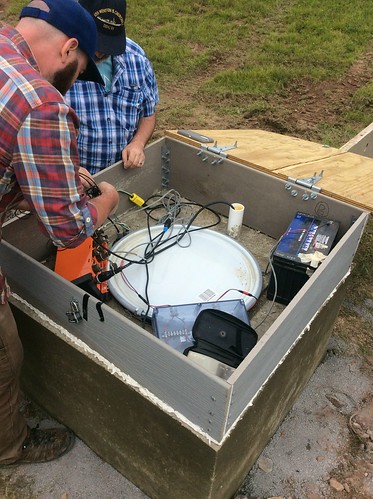 Maryland Geological Survey staff members install a seismometer on the McHenry campus in Garrett County in June 2018. The state-of -the-art sensor uses a suspended weight to detect vibrations in the Earth and feeds the signal into a nationwide monitoring system. Photo by Rebecca Adams.

It seems like a lot of earthquakes have been in the news in recent years. How often does Maryland have earthquakes and why do they happen here?
(Lourdes in Baltimore City)

Maryland has been the epicenter of a felt earthquake 66 times since 1758. This equates to about one earthquake every three years. However, that is not the whole story. The most damaging earthquakes experienced in Maryland actually took place in Virginia, South Carolina and Missouri. Our earthquakes typically come in swarms. There will be two or three during the course of a week or two, and then it will be quiet for a few years.

Maryland does not sit on any tectonic plate boundary as California, Washington and Alaska do. The closest tectonic plate boundary is in the middle of the Atlantic Ocean about halfway to England. Our earthquakes are located on old fault zones created hundreds of millions of years ago when our continent was forming. When stresses build up on these small weaknesses in the Earth’s crust, they will eventually slip and cause an earthquake.

Maryland currently has two seismometers that monitor for earthquake activity. One seismometer was installed in 2000 at Soldiers Delight Natural Environmental Area in Baltimore County, and the other was installed in 2018 in Garrett County. Real time records, as well as a complete list of past earthquake events, can be seen on our website, mgs.md.gov.

Article appears in Vol. 22, No. 3 of the Maryland Natural Resource magazine, summer 2019.