Patapsco River Surges Back to Life 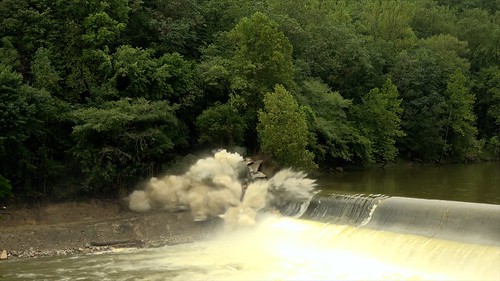 The former Bloede Dam was breached with explosives in September 2018; all removal work is now complete.

One of the most important dam removal projects in the Mid-Atlantic is officially complete. Project partners announced today that the Bloede Dam removal and river restoration is finished and a significant portion of the Patapsco River now flows freely through Patapsco Valley State Park.

After 18 months, often spent battling the elements during one of the region’s wettest years on record, crews have completed all construction work, including dam demolition, replacing portions of both Baltimore and Howard county sanitary sewer lines, and rebuilding the Grist Mill Trail. This area of the park re-opened just in time for the busy summer season. Visitors are enjoying the full range of outdoor recreation, anglers are fishing from newly emerging boulders in the former dam impoundment, and families are exploring the riverside trail.

“The Patapsco River is free, after years of hard work by so many. It’s wonderful to see the Patapsco rushing back to life, and to watch park visitors discover and enjoy the free-flowing river,” said Serena McClain, project manager and director of river restoration for American Rivers. “This major river restoration project would not have happened without the collaboration and dedication of many public and private partners. This success is proof that when we come together, we can accomplish great victories for our rivers and our communities that will resonate for generations to come.”

Bloede Dam served no functional purpose for decades and posed a serious public safety hazard in Patapsco Valley State Park. There were a number of injuries and deaths at the dam, with at least nine dam-related deaths since the 1980s, and the most recent occurring in June 2015.

“Today’s announcement caps a decade of work with many partners and is a win in many ways,” said Pat Montanio, Director of NOAA Fisheries Office of Habitat Conservation. “Opening the area to natural river flow benefits a healthier Chesapeake Bay ecosystem, including fish passage and improved river habitat for important fish species. The dam’s removal also benefits the people and the economy.”

“Removal of the Bloede Dam has been a long-term priority for both public safety and environmental reasons, so the department is very grateful for the strong partnerships that have finally made it a reality,” Maryland Department of Natural Resources Secretary Jeannie Haddaway-Riccio said. “Completion of this project means improved safety for our park visitors, restoration of the Patapsco River System, and healthier habitats for aquatic species – all of which are important to our department.”

In addition to eliminating the public safety risk, dam removal gives a tremendous boost to the health of the river ecosystem, including fisheries critical to the food web of the Chesapeake Bay. Bloede Dam was the first barrier on the Patapsco River blocking migratory fish swimming to and from the Bay. Its removal is the linchpin of a decades-long restoration effort that included the removal of Simkins Dam (2010) and Union Dam (2010).

Removal of Bloede Dam restores to the river and its tributaries more than 65 miles of spawning habitat for blueback herring, alewife, American shad, and hickory shad in the watershed, and more than 183 miles for American eel. Project partners will continue to monitor the site to better understand how the river responds physically and biologically to dam removal.

“The Service is a proud partner in the restoration of this historic, industrialized river to a free-flowing, connected, natural system,” said Wendi Weber, Northeast Regional Director for the U.S. Fish and Wildlife Service. “Where a concrete dam once threatened public safety and degraded wildlife habitat, people can now recreate, while aquatic species can move freely to reach important habitat. We are thankful to all who made this transformation possible and especially appreciate NOAA, American Rivers, and Maryland DNR for their vision and leadership.”

Since Hurricane Sandy struck the East Coast in 2012, the U.S. Fish and Wildlife Service has helped fund 32 coastal resilience projects in 11 states, using more than $100 million from the Disaster Relief Appropriations Act of 2013. Twelve dam removals, including Bloede, have restored nearly 100 miles of mainstem river to their natural state.