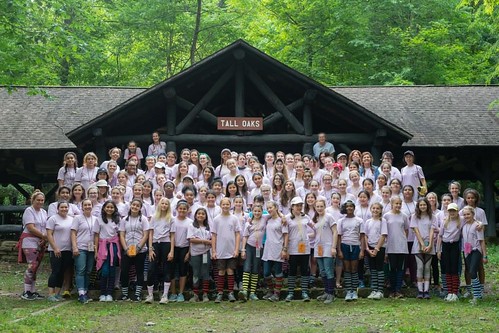 New Germany State Park has a few less “botanical bullies” thanks to an ambitious group of young women from the Washington, D.C. Stake of The Church of Jesus Christ of Latter-day Saints.

During their annual camp in June, the group teamed up with park staff and the Friends of New Germany State Park to remove more than 900 pounds of invasive plants from park grounds. Targeted species included garlic mustard, crown vetch, coltsfoot, Japanese stiltgrass, and exotic bush honeysuckles.

These unwanted plants spread aggressively and can out-compete native vegetation, often having  negative impact on other species that depend on native vegetation for food. Garlic mustard, for example, spreads quickly and out-competes native toothwort, which is the primary food source for the West Virginia white butterfly, a rare native insect.

“Controlling non-native invasive plants is one of the goals in our strategic management plan,” New Germany State Park Manager Erin Thomas said. “We really appreciate these volunteers taking some time during their camp to work with us, and I’m amazed at what they were able to accomplish.”