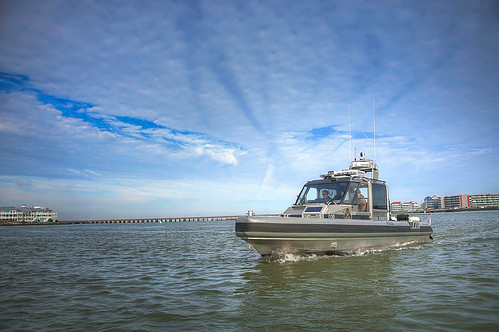 The patrol boats were able to catch and stop the fleeing vessel, which was travelling approximately 35 knots northbound in the Assawoman Bay, but Natural Resource Police say the operator remained uncooperative. Police boarded the vessel and detained the operator, identified as Anthony Gerard Campisi of Lansdale, Pa.

Natural Resources Police charged Campisi with operating a vessel under the influence of alcohol, negligent operation of a vessel, and failing to yield to law enforcement; he also faces several federal charges from the Coast Guard.

Natural Resources Police charged a Pennsylvania man for operating a vessel under the influence of alcohol July 5 in Deep Creek Lake.

Police stopped boater Patrick Doran of Venetia, Pa. at about 10 p.m. for improper navigation lights in the area of Glendale Bridge. The officer suspected he might be impared and issued field sobriety tests, which he failed, according to police.

Officers arrested Doran for operating a vessel under the influence of alcohol or drugs and failure to comply with inland navigation rules. Doran faces up to 16 months in jail and $2,500 in fines.

Two Walkersville residents were charged with taking rental boats and items from a boat house in Cunningham Falls State Park.

Police say Christina Huffer and Ambur Javed took rental boats out onto the lake without permission and broke into the boat house by reaching through an unsecured window and unlocking the door. Huffer also admitted that she and Javed took drinks, a lighting adaptor cord, and $1.50 in cash from the boat house, according to police.

Huffer and Javed were charged with fourth degree burglary, malicious destruction of property, and theft less than $100.

Both face up to three years in jail for the burglary and an additional penalty of five months jail time and up to $1,000 in fines for the other charges.

On June 26, officers say they observed two individuals harvesting fresh water clams near Dickerson Conservation Park. Officers stopped the duo on land and found them in possession of about one bushel of freshwater clams. Jun Qing Zhang of Hyattsville and Qin Mao Fang of Hagerstown were charged with harvesting a bivalve shellfish during closed season.

On June 29, officers again observed Zhang and Fang harvesting fresh water clams from the river. Each received an additional citation for the harvest of bivalve shellfish during closed season.

On June 30, officers observed another three individuals harvesting fresh water clams from the Potomac River. After the suspects didn’t return to their vehicle, officers entered the area and briefly pursued them, at which time police also said they attempting to conceal freshwater clams and clamming equipment.

Wensong Chen of Ellicott City, Cheng Yu Qiu of Baltimore, and Xi Chen of Parkville were each charged with harvest of bivalve shellfish during closed season.

On July 10, Natural Resources Police observed several individuals on a recreational vessel catching and keeping striped bass that were undersized and also in excess of the daily limit. During an inspection of the boat, police uncovered a large trash bag containing 27 undersized striped bass concealed in the bilge area of the fishing vessel. The officers discovered two more legal-sized striped bass in a cooler. Officers confiscated the 27 illegal fish and donated them to a local food pantry.