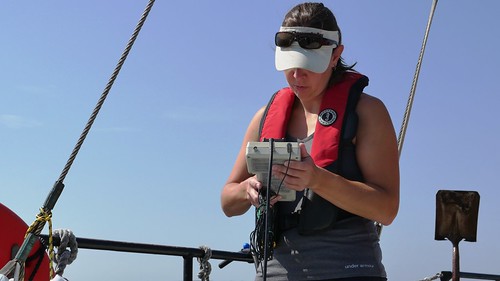 Maryland Department of Natural Resources monitoring shows that dissolved oxygen conditions in the state’s portion of the Chesapeake Bay mainstem were better than expected in late June. The hypoxic water volume — areas with less than 2 mg/l oxygen — was 0.69 cubic miles, which is well below the late June 1985-2018 average of 1.15 cubic miles, and an improvement from the 1.13 cubic miles of hypoxia observed in early June. No anoxic zones — areas with less than 0.2 mg/l oxygen — were observed.

An important caveat to these improved results is the effect of wind. On June 21, three days prior to the June 24-26 main bay sampling, the average daily wind speed was 15 knots with periods over 25 knots. These winds helped to mix oxygen from the surface into deeper waters. The lower Maryland bay was sampled on June 24 and it is evident on the inset map that waters were still somewhat mixed, with hypoxic conditions constricted across the bay, and starting lower in the water column at about 20 meters deep. 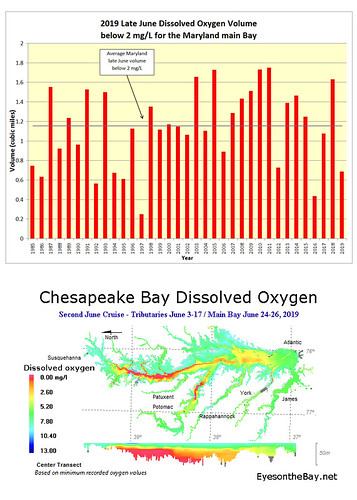 When sampling resumed in the mid-Maryland portion of the bay on June 25, hypoxic conditions were resuming, and appearing at 10 meters and below. If sampling had occurred several days later, average hypoxic results for the period might have been observed. These results provide scientists and managers with additional insight on the expected duration of improved conditions after a sustained wind event.

In the beginning of June, the National Oceanic and Atmospheric Administration, U.S. Geological Survey, University of Maryland Center for Environmental Science and University of Michigan scientists predicted a large hypoxic volume for the bay in 2019 due to higher flows last fall and this spring, and higher nitrogen loading from the Susquehanna and Potomac Rivers.

Crabs, fish, oysters, and other creatures in the Chesapeake Bay require oxygen to survive. Scientists and natural resource managers study the volume and duration of bay hypoxia to determine possible impacts to bay life. Each year from June through September, the Maryland Department of Natural Resources computes these volumes from data collected by Maryland and Virginia monitoring teams during twice-monthly monitoring cruises. Data collection is funded by these states and the Environmental Protection Agency’s Chesapeake Bay Program.

Bay hypoxia monitoring and reporting will continue through the summer.