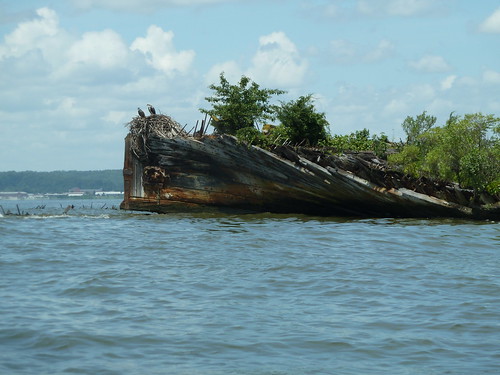 NOAA, the state of Maryland and Charles County today announced the designation of a new national marine sanctuary to protect the remains of more than 100 abandoned steamships and vessels built as part of America’s engagement in World War I.

“The designation of Mallows Bay as a national marine sanctuary is an exciting milestone for NOAA and an opportunity for the public to celebrate and help protect this piece of our nation’s rich maritime history,” said Neil Jacobs, Ph.D., acting NOAA administrator. “We look forward to working with the state of Maryland, Charles County and other local partners to foster education and research partnerships as well as support and enhance local recreation and tourism along this historic stretch of the Potomac River.”

The state of Maryland nominated the area for sanctuary designation in 2014 to protect and conserve the shipwrecks and cultural heritage resources, to foster education and research partnerships, and to increase opportunities for public access, tourism and economic development. The nomination enjoyed broad community support as well as strong support from the Maryland congressional delegation.

“We are thrilled by NOAA’s announcement of the Mallows Bay-Potomac River National Marine Sanctuary designation,” said Maryland Governor Larry Hogan. ”Preserving our history, heritage, and natural resources have always been a priority for our administration and designating this national treasure as a marine sanctuary is yet another example of our stewardship; and will ensure that people from both Maryland and beyond will have the opportunity to experience this amazing site for years to come.”

Located along an 18-square mile stretch of Potomac River coast in Charles County, Maryland, the new sanctuary boasts a collection of historic shipwrecks dating back to the Civil War, as well as archaeological artifacts nearly 12,000 years old. Its culturally rich landscape also includes sites that represent the history of Native American communities in the area, the once-booming Potomac River fishing industry and the Civil War.

“We are pleased to work with our state and federal partners to highlight one of the county’s national treasures that tells an important historical story,” said Charles County Commissioner President Reuben B. Collins II, Esq. “I am proud we are taking these next steps to preserve the beauty of Mallows Bay and highlight this attraction for our residents and visitors worldwide.”

Mallows Bay is most renowned for its “Ghost Fleet,” the partially submerged remains of more than 100 wooden steamships that were built in response to threats from World War I-era German U-boats that were sinking ships in the Atlantic. Although the ships never saw action during the war, their construction at more than 40 shipyards in 17 states reflected the massive national wartime effort that drove the expansion and economic development of waterfront communities and maritime service industries. The fleet was brought to the Potomac River to be salvaged for scrap metal by a company in Alexandria, Virginia, not far from the sanctuary site.

Today, nature has reclaimed the ships, with some appearing to look like long skinny islands of vegetation. The wrecks provide shelter for flora and fauna, including fish, beaver and osprey.

NOAA, the State of Maryland, and Charles County will manage the national marine sanctuary jointly. NOAA’s sanctuary management actions primarily will be focused on protecting the Ghost Fleet and related maritime heritage resources. Authorities related to natural resources and their management will remain with Maryland Department of Natural Resources and the Potomac River Fisheries Commission, a multi-state agency.

“There’s good reason that the Mallows Bay-Potomac River National Marine Sanctuary will be the first national marine sanctuary created in the last two decades – it’s a unique blend of historical, recreational and habitat resources with strong public support for its protection,” said Senator Ben Cardin of Maryland. “I strongly applaud the dedication of all those who have worked to help get us to this point and will continue to work with them in support of the sanctuary’s final designation in the days ahead.”

“For years, we have been working with federal, state, and local partners to establish a National Marine Sanctuary in Mallows Bay. Today, that hard work becomes a reality,” said Senator Chris Van Hollen of Maryland. “This is a win-win for Maryland, ensuring that this unique area – which boasts unbelievable history and important wildlife – is preserved for future generations. It will also help spur increased tourism and boost the local economy. Thanks to everyone in the community who helped make this possible. “I’m pleased that Mallows Bay has finally received the long overdue designation of National Marine Sanctuary,” said Rep. Steny Hoyer of Maryland, whose district includes the sanctuary site. “This important distinction, which I have advocated for since 2014, will ensure Mallows Bay is protected for years to come, support job creation and spur local tourism. I join in thanking the community leaders, volunteers, and business owners who have long championed this designation.”

The sanctuary designation will take effect following 45 days of Congressional session after publication of this action in the Federal Register.