Go Colonial to Celebrate Our Independence 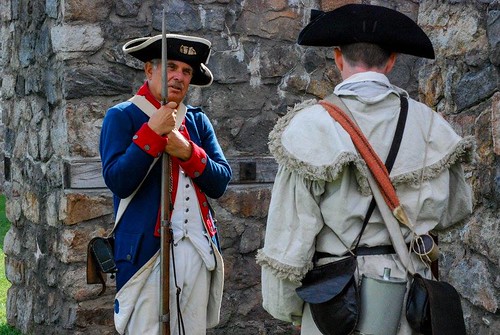 Fort Frederick State Park invites Marylanders to experience what life was like at the fort during the American Revolution as it presents its annual program, “The Fort is Pretty Full,” June 28 through July 7. Events take place from 10 a.m. to 5 p.m. each day.

Built in 1756 to protect English colonists during the French and Indian War, Fort Frederick was pressed back into service in 1777 by the Continental Congress as a prison camp for captured British troops.

The park’s historical interpreters in authentic, period clothing and uniforms will raise the Stars and Stripes over the fort, share the story of the British prisoners of war that were held there,  demonstrate daily activities of the American soldiers — complete with military drills and musket firings — and read the Declaration of Independence to the crowd.

“This program allows our visitors to immerse themselves in the world of the prisoners, soldiers, and women whose lives were centered around Fort Frederick during our nation’s founding years,” Ranger Rob Ambrose said.

Fee for entrance to the park is $3 per vehicle for residents and $5 for nonresidents. Visitors should also be advised that disabled access is available, although most of the activities are on grassy areas.