‘Living Fossils’ Spawn Every May and June 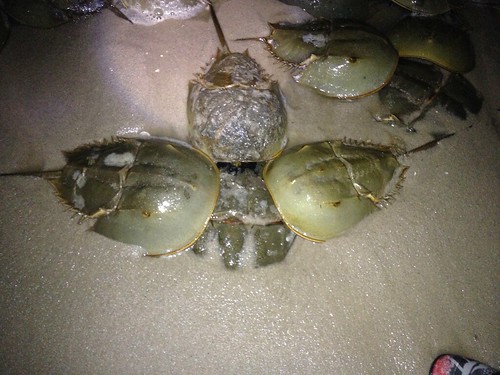 One of the world’s oldest wildlife migrations is set to begin on Maryland’s coastal bays and beaches.

For 350 million years, the May and June full and new moons have fostered a giant migration of horseshoe crabs. Coming from the depths of the Atlantic Ocean, millions of these prehistoric arthropods clumsily invade Maryland’s beaches for this ritualistic spawn, laying their eggs on shore.

The best chance for viewing these living fossils on Maryland’s Atlantic Coast and along the Chesapeake Bay this year are during the high tides of a full moon, May 18 and June 17, and the new moon, June 3. Cold water temperatures may delay the early part of the spawn.

Every year during this time, the Maryland Department of Natural Resources conducts a horseshoe crab migration survey.

“I’m in a unique place to be able to witness this event,” said fisheries biologist Steven Doctor, who leads the yearly survey. “This event has significant ecological impacts not just for future generations of horseshoe crabs but for other species up and down the coast.”

On average, one horseshoe crab can deposit nearly 20,000 eggs on the beach. Ultimately, many of the horseshoe crabs eggs never reach maturity, and instead are devoured by crustaceans, fish, and migrating shorebirds such as the red knot and sandpiper; who depend on this feast for survival.

Despite a horseshoe crab’s armor and menacing tail, they are gentle creatures that do not bite or sting, and can only survive outside of water for a short amount of time. To help sustain the population and return back to the water, individuals who see a horseshoe crab on its back are asked to gently flip it over using two hands; and never by its telson (tail).

While the horseshoe crab is not consumed, its copper-based blue blood is invaluable to cutting-edge biomedical research.