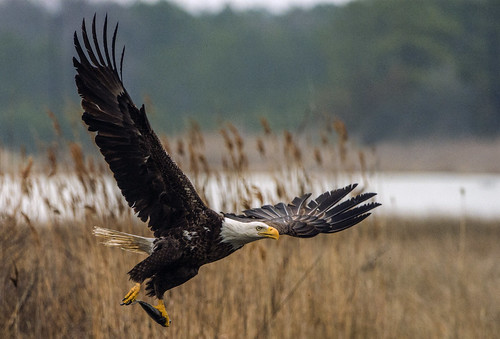 The Maryland Department of Agriculture (MDA) and the Maryland Department of Natural Resources are working together to address the continued illegal use of carbofuran—a banned pesticide that has been implicated in recent poisoning events in Kent and Talbot counties that have killed at least seven bald eagles and one horned owl. This is the latest in a string of incidents that date back to February 2016, when 13 bald eagles were poisoned under similar circumstances in Caroline County.

“We are all very troubled by the continued use of this highly toxic banned pesticide,” said Agriculture Secretary Joe Bartenfelder. “Carbofuran has been banned for a reason, and this trend of wildlife poisonings on the Eastern Shore is unacceptable. I urge anyone still in possession of carbofuran to contact our pesticide regulation section immediately and arrange for proper disposal.”

“We are extremely concerned about the death of these magnificent birds, including our nation’s symbol. Our first priority is to prevent any further events of this type from occurring,” said Natural Resources Secretary Jeannie Haddaway-Riccio. “We are making it a priority to inform and educate the public on how destructive carbofuran is to our wildlife and that they should do the right thing and properly dispose of any remaining stock.”

MDA’s pesticide regulation section has issued an enforcement advisory regarding the persistent illegal use of carbofuran, which was commonly sold under the trade name Furadan. In 2009, federally approved uses of carbofuran were voluntarily cancelled after the U.S. Environmental Protection Agency (EPA) concluded that its dietary, worker, and ecological risks were unacceptable for all uses.

It is illegal to use or sell or these products under state and federal law. Any violation of Maryland’s Pesticide Applicator Law is subject to a fine of up to $25,000 and/or prison. These violations may also be subject to additional penalties from the EPA.

While it is not illegal to possess an unregistered or banned pesticide, it must be stored in compliance with state regulations and may not be used, sold, or traded. The department urges any individual in possession of carbofuran to responsibly dispose of the pesticide immediately.

For directions on the proper disposal of pesticides, please contact 410-841-5710, or pest.reg@maryland.gov.

The Maryland Natural Resources Police and U.S. Fish and Wildlife Service (USFWS) are investigating the most recent cases, and have urged anyone with relevant and specific information to come forward. USFWS has offered a reward of up to $10,000 to eligible individuals for information that furthers this investigation.