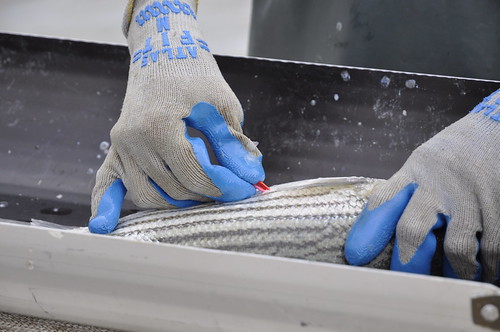 Following deliberations by the Atlantic States Marine Fisheries Commission (ASMFC) on the status of the striped bass population along the Atlantic Coast, the Maryland Department of Natural Resources continued its ongoing leadership in striped bass conservation efforts.

At this week’s ASMFC meeting, Maryland again addressed the most pressing problem facing the Chesapeake Bay’s striper population — the significant volume of “dead discards” in the recreational fishery, where many striped bass are caught and released, but do not survive when they are returned to the water. Maryland emphasized that the most recent science and data shows that any measures that do not address this problem directly will not result in conservation.

In 2015, ASMFC increased the minimum size for “keeper” fish, a well-meaning attempt to protect striped bass population that instead was counterproductive, leading to increased mortality. Every fish that is hooked, removed from the water and handled is at risk of dying when placed back in the water. Following the size change, the number of dead discards have actually increased as anglers catch and release fish to find keepers, thus increasing the number of fish that were handled.

In 2018, Governor Hogan and Maryland Department of Natural Resources raised concerns about this problem with ASMFC. This resulted in the adoption of a decreased minimum size from 20 to 19 inches. In addition, Maryland took unilateral action to require the use of circle hooks when chumming and live lining (the methods by which most recreational anglers catch striped bass.) Circle hooks are an effective conservation measure because they significantly reduce “gut hooking” that leads to discard mortality. The department also launched and is continuing to expand an educational outreach program to assure compliance with these regulations.

Maryland is hopeful that all other East Coast states will join with us to address this important conservation issue. In the meantime, the department is encouraging all anglers to do their part by implementing conservation measures, including handling fish more carefully and lessening the number of fish they catch and later release. Advice and tips can be found on the department’s website.

Maryland will continue to make conservation decisions based on the best available science for the long-term future of striped bass in the Chesapeake Bay. Staff will continue working with stakeholders on practical solutions to preserve, protect and restore our striped bass populations.