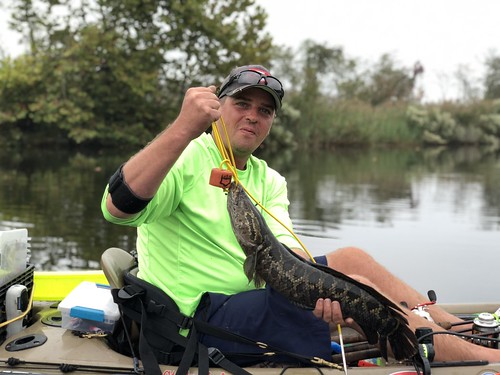 We have been in a warmer, dry “Indian summer” weather pattern. Many anglers have been getting out on the bay to enjoy action with top water striped bass, late season bluefish and the last of the Spanish mackerel.

While the calendar says October, we won’t see fall-like weather until later this week. Windy and wet conditions through Friday followed by much cooler air the rest of the week will to continue to mix and cool bay waters. Once the winds decrease Saturday, expect fishing conditions to steadily improve as uniformly mixed waters provide plenty of cool, well oxygenated water for hungry gamefish to roam from the surface down into deeper waters of at least 30 feet. However, the Don’t Fish Below Depth at Swan Point and the Bay Bridge is 16 feet and 25 feet, respectively. As always, avoid areas with the worst water clarity.

At the Maryland Department of Natural Resources and National Oceanic and Atmospheric Administration buoys, water temperatures are moderate and expected to drop, with Susquehanna River at 67 degrees, Gooses Reef at 75 degrees and Point Lookout at 77 degrees. Expect poor water clarity from the high flows coming from the Susquehanna River and most western shore rivers and streams to continue. In addition, there is still poor water clarity on the Potomac River down below the Route 301 Bridge from the high flows. In the middle bay, expect poor water clarity near Gooses Reef due to an algal bloom. There will be above average tidal currents through Monday as a result of the new moon Oct. 9.

For the full weekly fishing conditions summary and more, please be sure to check out Click Before You Cast. 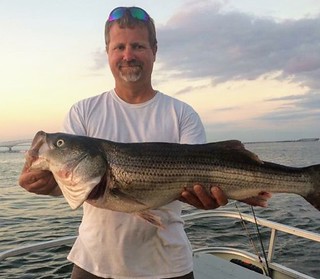 Jeff Herd caught this 35-inch rockfish near the mouth of the Patapsco using live menhaden he caught with his cast net. Photo courtesy of Rich Watts

Water flow from Conowingo Dam has slowed with no spill gates open, as we have been in a pattern with dryer, warmer weather this week. However, flows are still above average, so expect some murky water in the upper bay, along with a continued push of channel catfish in many areas. A few bluefish have made it all the way up to Bear Creek near Dundalk, but overall numbers of blues in the upper bay are down from previous years because of lower salinity.

Chumming and fishing with cut menhaden chunks continues to attract striped bass in the usual locations, at Swan, Love and Podickory points. The Baltimore Light and Podickory Point have both been hot spots recently, with some large channel catfish up to 36 inches and 15 pounds in the mix. There all still a few small spot in the upper bay which are good for live bait. Live-lining with spot and jigging has been good around the Bay Bridge pilings and rock islands.

Striped bass have been moving up into the rivers, including the Patapsco, and are being caught from shore on bloodworms and peeler crabs and also from boats while jigging. Some small bluefish are also being caught from shore, all the way up to Bear Creek, on cut alewives and peeler crab. Top water baits are working near piers and structure in the rivers, during low light periods – mornings, evenings and overcast days. Trolling the mouth of the rivers is also producing with light bucktails and small paddletail swimbaits.

With the cooler temperatures, fish are starting to shift to deeper water around the various reefs, oyster bar and lumps. A few perch are still being caught from shore on spinnerbaits and bait rigs with peelers and bloodworms. Channel catfish continue to be active and are hitting a variety of baits and artificial lures from the Susquehanna Flats down to Matapeake and can be caught in all of the region’s tidal rivers. 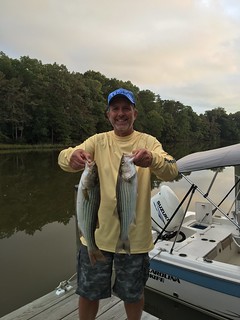 Cooler water temperatures continue to drive the striped bass fishery in an early fall pattern. Breaking striped bass, with a few stray blues mixed in, are showing up in scattered locations in the bay and the Choptank River. Schools of baitfish tend to move out of the tidal rivers and into the bay and are swept around points on the outgoing tide. A few anglers are still live-lining with small spot, but many folks have now switched over to casting, jigging and trolling umbrella rigs with plastic shads, spoons and hoses. Hotspots are around Buoy 83, Poplar Island, Eastern Bay, Gum Thickets, Thomas Point, Tolley Point, inside the Choptank River and the Bay Bridge rock islands. Any riprap, points or shoreline structure may be good for top water fishing during low light periods.

Bottom fishing for white perch and spot will shift to deeper water and southward as waters cool down – try fishing over oyster bottom in deeper areas with peeler crab or bloodworms. If you are interested in spot, they tend to prefer bloodworms or fishbites. Expect these perch to keep moving into deeper water with windier weather, storms and cold fronts in the forecast this week.

Tackle shops and charter boat captains continue to report that trolling a mix of hoses and small spoons is a good option to catch a mix of striped bass, bluefish and Spanish mackerel. Cobia are now out-of-season and must be released if caught. Planers are being used to pull lures down to the correct depths along channel edges and the outside edges of breaking fish. Casting and jigging with various metals, jigging spoons and Stingsilvers has also been productive. The Tangier and Pocomoke sounds and the zone between Point Lookout and the Cedar Point rips have been producing Spanish mackerel, bluefish up to 5 pounds and mostly smaller striped bass under 19 inches.

With the cooling trends, the tidal Potomac and Patuxent rivers continue to produce striped bass along shoreline structure for those casting topwater lures, swimbaits and crankbaits. Cooler water temperatures have fish very active in these shallower waters and overcast days, mornings and evenings tend to be best for popper fishing.

Recreational crabbing in all three regions of the bay should be good for a couple more weeks. Cooler water temperatures push the crabs into the rivers and shallower waters in the 8-15 foot range and they will be very actively feeding, with some large heavy male crabs in the mix. Trotlining with fresh chicken necks is the standard technique, but razor clams tend to catch better. Recent reports say the area around Annapolis, including the South and Severn rivers, has been good according to recent reports. 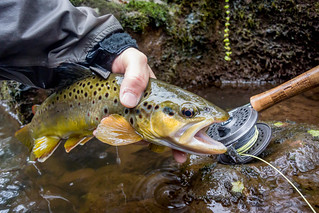 In western Maryland, the cooler water temps will keep fish active and will keep boat traffic off the water. At Deep Creek Lake, boat and Jet Ski traffic will continue to decline and anglers are able to find quiet fishing spots on the lake and good fishing for a variety of fish. Yellow perch, smallmouth bass and walleye can be found along deep grass edges and caught by drifting live minnows. Expect northern pike fishing to get better with the passing cold fronts and cooler, rainy weather, they are starting to get active along weedlines. Trout fishing has been good in western Maryland for fly anglers, with a mix of brown, brook and rainbow trout in the Savage River.

Largemouth bass have been very active for longer periods during the day and can be found near grass and sunken wood. Grass beds are declining so any that remain are good places to target. In tidal areas an ebb tide is one of the best times to target the outside edges of grass and spatterdock beds. Spinnerbaits, small crankbaits, tubes and various soft plastics are good choices for baits. 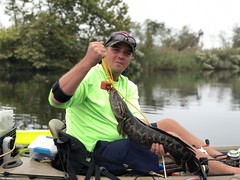 Northern snakeheads are being still caught in various areas on both shores, including the Blackwater area. They can be caught on a variety of lures and live minnows. Buzzbaits, plastic frogs and weedless rigged plastics are the top lures.

Lower salinity values in the lower Potomac have been pushing blue catfish as far south as the mouth of the Wicomico River, with many being caught by accident by striped bass anglers  Anywhere from that point to the Wilson Bridge provides excellent fishing for blue catfish, with Fort Washington known as a usual hot spot. A pair of anglers that launched on the Virginia side of the river and fished near Fort Washington caught a blue catfish that weighed over 60 pounds! 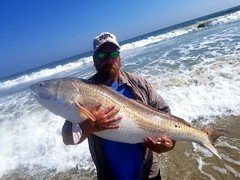 Some of the most exciting reports from the ocean beaches has been a push of big red drum, up to 55 inches, in the Assateague surf, caught on cut spot and live spot.

In the Ocean City area, keeper-sized flounder are still being caught in the area by those casting Gulp baits or drifting live mullet, spot or small menhaden in the back bays and off the piers and bulkheads and under the Route 50 bridge The back bay channels are still providing flounder action. As waters cool, the offshore wrecks and reefs will be the better spots for flounder.

The ocean wrecks and artificial reefs are producing some good sea bass fishing this week with some triggerfish and bluefish mixed in. Trolling the inshore and mid-range lumps and floating weedlines and buoys was resulting in a mixed bag of dolphin, bluefish, king mackerel and Spanish mackerel, but colder temperatures will drive these fish further south soon.

Offshore action for white marlin and dolphin is still good when boats can get out. The white marlin action continues be at the Washington Canyon and is expected to shift south. Dolphin action is red-hot from the standard offshore areas, anywhere between the Hot Dog, Rockpile and Poor Man’s canyon, with many boats targeting dolphin and limiting out. The yellowfin tuna are still missing but should be moving south through our area as waters cool.

“If people concentrated on the really important things in life, there’d be a shortage of fishing poles.” – Doug Larson

This week’s Maryland Fishing Report was compiled by Erik Zlokovitz, filling in for Keith Lockwood.