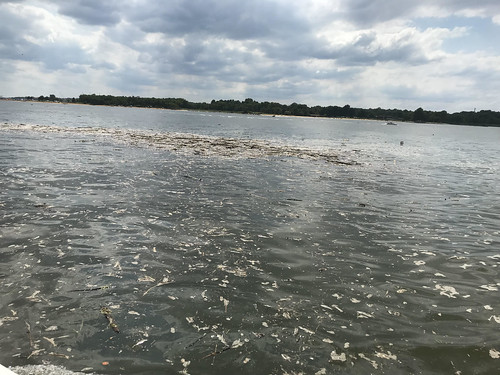 Recent heavy rains caused a lot of changes to our Chesapeake Bay waters. Large volumes of water coming down from Pennsylvania necessitated the opening of more than 20 gates at Conowingo Dam, causing high water levels in the lower Susquehanna River and floating debris entering the bay.

Boating will be difficult in the upper and middle bay, and water contact should be kept to a minimum. Boaters should report any navigation hazards to the Maryland Natural Resources Police at 410-260-8888, or the U.S. Coast Guard at 410-576-2693.

One positive side effect of the water release is that the striped bass in the upper bay got a break with cooler temperatures and mixing of oxygenated water.

Right now muddy debris-laden waters are present from the top of the bay down below Chesapeake Bay Bridge. The release cooled bay waters by 3-5 degrees and also recharged oxygen to most of the water column. As of July 27, the coolest waters from surface to bottom were from the Susquehanna Flats down to the Still Pond area. The temperature break appears to be near Gunpowder Neck, with warmer waters below that point. The National Oceanic and Atmospheric Administration buoy at Annapolis reads 78 degrees while Point Lookout says 81 degrees.

From the Bay Bridge north, most areas have adequate oxygen from surface to bottom. For anglers fishing bay waters, continue to seek the best combination of clear, cool, oxygenated waters. There will be above average tidal currents through Thursday as a result of the recent full moon July 28.

Trying to navigate the waters of the upper bay has been akin to walking through a minefield. The amount of debris ranging from leaves to whole trees is hard to believe. The Conowingo Dam had 22 gates open over the weekend releasing approximately 400,000 cubic feet of water per second; currently the release is down to slightly less than 100,000. Runoff from western shore tidal rivers has added to the debris fields along with raw sewage from overflowing sewage treatment plants. 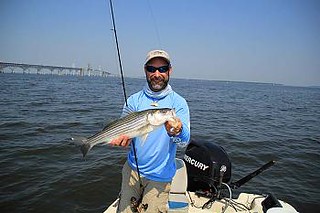 Once the rain stopped this past weekend, a few boats did slowly venture out into the upper bay to try some chumming and found striped bass at Swan Point, Love Point and Podickory Point. The fishing was described as a slow pick, but fish were caught. A group of boats could also be seen anchored up on the southwest side of the Bay Bridge chumming in about 15 feet of water. There has also been an early morning topwater bite near the rock piles.

Despite less than stellar water in the tidal rivers, fishing for white perch has been very good. Small spinnerbaits or spinners are a good choice when casting near shoreline structure. Bloodworms or grass shrimp are good choices when fishing in deeper waters with a bottom rig. There are catfish in the tidal rivers and can provide plenty of entertainment for those fishing on the bottom with cut bait. 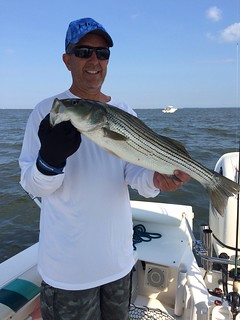 Unfortunately the floating debris from Conowingo Dam is moving into the middle bay region this week, and will pose a big problem for boaters. There are spot available in the lower Choptank River for those wishing to try some live lining. The spot can be found on hard bottom inside of Black Walnut Point. The striped bass can be found on the shallower edges of Thomas Point, Tilghman Point in Eastern Bay and edges near Sharps Island and the Diamonds at the mouth of the Choptank.

It will be difficult to troll in the middle bay region due to debris fouling lines but if you do, gold spoons and crankbaits with rattles would be a good bet. There continues to be an early morning shallow water bite for striped bass in the region’s tidal rivers and Poplar Island rocks. Topwater lures and jerkbaits are popular lures to use.

Lower Bay
Fishing for striped bass tends to be a stable option this week as compared to farther up the bay. Chumming and live lining spot are the most popular ways to fish along channel edges in the bay and lower Potomac River. Focal points are the rock piles above Point Lookout and to a lesser degree Buoys 70 and 72. In the lower Potomac, the steep channel edges parallel to St. Georges Island and Tall Timbers are providing good success. There are a lot of smaller striped bass in the mix, but larger fish are also being caught.

Live lining spot has been very popular, and the deeper edges of the shipping channel and in the lower Potomac have been great places to fish. A tip from anglers who are gaining experience with circle hooks is to hook the spot behind the dorsal fin and more toward the tail.

Small bluefish are showing up in the area but the larger ones along with Spanish mackerel have been holding south in Virginia waters. This may be due to the large amounts of runoff coming down the Potomac and reducing the salinity in the bay. Cobia are scarce as well and most catches are been reported in Virginia waters.

Fishing for spot and croaker is good in the lower Patuxent River, the lower end of Hoopers Island, and Tangier and Pocomoke sounds. Bloodworms are the most popular bait for catching spot, while croaker can be caught on peeler crab or bloodworms. Fishing for white perch has been excellent in the tidal rivers, creeks and sounds this week. Casting small lures along shoreline structure in the early mornings or late evenings is a fun way to catch them. Fishing in deeper waters with bloodworms or grass shrimp on a bottom rig will also put some nice perch in an ice chest.

Recreational crabbing continues to steadily improve each week and most can put together a half bushel to a full bushel in the middle and upper bay regions. The best crab catches are coming from the lower bay region and particularly on the eastern side of the bay. Fresh chicken necks or razor clams are the best baits to use. The crabs tend to be in waters 12 feet or less. 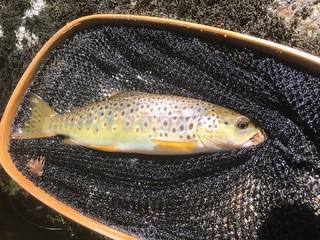 The fishing at Deep Creek Lake has focused on targeting the shallower areas in the early morning hours for a mix of largemouth bass and chain pickerel. Later on in the morning, largemouth bass can be found holding under floating docks and thick grass in deeper waters. Drifting along deep grass edges and rocky points with live minnows is perhaps one of the best ways to fish during the day if you can dodge boat and Jet ski traffic. A mix of walleye, smallmouth bass, yellow perch, largemouth bass and chain pickerel can be found in these areas. Trout can be caught along the dam face in deep waters by slow trolling minnows or nightcrawlers behind spinner rigs; walleyes can also be found there.

The upper Potomac River and the North Branch are experiencing flood conditions at this time and are unsafe for fishing or boating. Most of the smaller creeks and streams are in better shape with good water flow. Fly-fishing with streamers and woolly buggers can be a good tactic when cool runoff water causes trout to be more active. Casting small spinners and spoons are also very effective in trout management waters where spin casting is allowed. 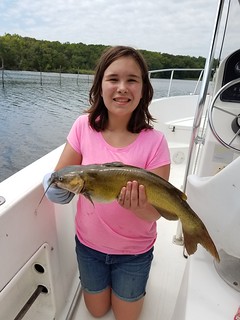 Summertime fishing for largemouth bass continues to be a favorite pastime for many anglers whether fishing on the many tidal rivers, reservoirs or small farm ponds. Some of the tidal rivers are running strong and stained this week due to runoff. Using noisy crankbaits can be a good tactic in some of the deeper waters. Clear running feeder creeks can be a good place to target and working the shallows with buzzbaits in the early morning hours is a good bet. Many of the tidal rivers and creeks now have northern snakeheads, so they can often be part of the topwater mix.

Crappie can be found holding close to structure in deeper waters such as sunken wood and marina docks or bridge piers. Using either minnows or small jigs on a slip bobber is a great way to catch them. Several species of catfish are active, and channel catfish are being caught in upper bay waters and most tidal rivers. Blue catfish dominate the tidal Potomac River and are also abundant in the Patuxent and Nanticoke rivers.

A break in rough weather allowed the surf to calm down and wind chop to dissipate, so that fishing in the Ocean City area could once more begin in earnest. The kingfish returned to the surf and the best catches were occurring in the morning hours. There is also a mix of small bluefish, flounder and blowfish in the surf. 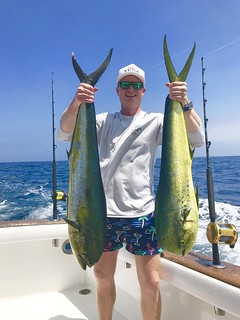 Kevin Thomas holds up a nice pair of dolphin. Photo by Nick Collision

At the inlet, sheepshead and triggerfish are being caught at the South Jetty on sand fleas. Flounder are in the inlet area, traditional minnow and squid strips baits always catch their share. Drifting live mullet or spot as well as jigging with white Gulp swimming mullet baits have been accounting for some doormat sized flounder this week.

Flounder are the number one target in the back bay channels and drifting along on a sunny day is a favorite Ocean City fishing activity. Small sea bass can be pesky at times for those using squid for bait, but provide plenty of fun for the younger anglers on board.

Calm sea conditions have allowed boats to venture far and wide in search of sportfish. Large flounder are the favorite catch of those fishing the inshore wreck and reef sites. The deeper and farther offshore sites such as the Jackspot are holding sea bass and a mix of Atlantic bonito, bluefish and king mackerel.

The canyon areas are holding the typical mix of offshore species for those trolling. Dolphin, yellowfin tuna and white and blue marlin are being found at the canyons. Recently at Massey’s Canyon there was a wonderful Bluefin tuna bite for those chunking. Chicken dolphin are holding at lobster pot buoys and weed lines, and gaffer size dolphin are also in the mix.

“Always it was to be called a fishing rod. If someone called it a pole, my father looked at him as a sergeant in the United States Marines would look at a recruit who just called a rifle a gun.” – Norman MacLean