Blue Catfish a Prize Catch for Anglers and Scientists 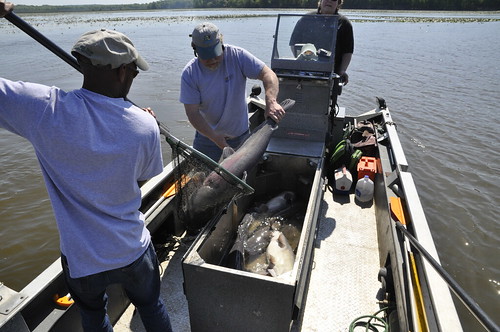 Reaching up to nearly a hundred pounds, blue catfish is the largest species of catfish in North America, and due to its size and strength has quickly become a favorite catch for anglers.

A native of the Mississippi River basin, blue catfish were introduced to the mid-Atlantic in the 1970s. Since then it has exploded in population and range, and can now be found throughout Chesapeake Bay and Potomac River watersheds. “Blue cats” are considered an invasive species in Maryland as they threaten the local ecosystem.

To understand blue catfish’s impact, the Maryland Department of Natural Resources targets them during spring and summer to determine the fish’s exact diet. After catching a specimen, scientists determine age and sex, and if female, weigh the ovaries and count any eggs.

Additionally, their stomach content is recorded. As ferocious eaters, blue catfish are documented to consume a variety of native fish species, including American shad, blue crab, menhaden, river herring, white perch, yellow perch and sometimes other blue cats. Blue catfish are generally believed to be a deep water species, but examination of their stomach contents show they frequently utilize shallow water for food. The department is also working with federal and state agencies to collect unidentifiable gut contents for DNA barcoding. This process helps identify any unrecognizable remains as well as keeping an ongoing record of species. Results from the study will be presented to a multistate agency on invasive catfish.

All blue catfish collected for the study are donated to food banks.