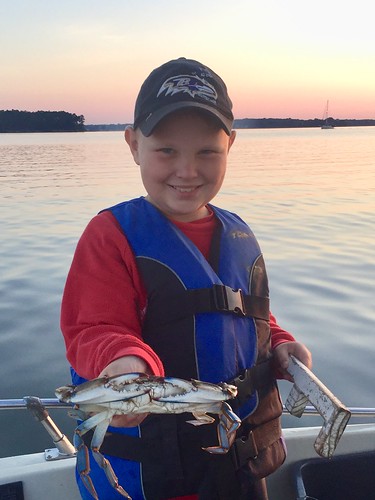 Ryan Bishop is all smiles as he holds a big jimmy destined for some crab picking. Photo by Sherry Bishop

The Fourth of July is upon us, and although it falls on a Wednesday — missing that three-day weekend luster – it’s still a little extra time off to enjoy family and friends. Here in Maryland a lot of activities will focus on a nearby body of water, from Deep Creek Lake to the Atlantic Ocean and everywhere in between.

For those living near the bay or coastal waters, the Fourth of July often means crabs and sweet corn. Judging by early observations of recreational crabbers, there were a lot of crab feasts promised, and hopefully the gatherers will be able to deliver.

Those crabbing in less than 12 feet of water tend to be catching the most crabs in the lower and middle bay. Razor clams tend to top the list as the best bait.

July 4 offers fishing opportunities for everyone with or without a license. Recreational crabbing will be permitted, and it’s also the last license-free fishing day of the year.

As the summer progresses, water conditions will force Chesapeake Bay rockfish into smaller and smaller areas. With the waters moving closer to temperatures rockfish (will avoid anywhere above 84 degrees) anglers can stick to the main stem and seek out the coolest water with adequate oxygen available that combines excellent structure, moving water and bait. For shallower areas, focus your fishing times to low light periods.

Besides some possible rain Friday and Saturday, anglers will experience hot, sunny fishing conditions for most of this upcoming week. Expect the weather to continue to push water temperatures toward the middle 80s. These warmer temperatures will result in rockfish seeking cooler, deeper waters with adequate oxygen. However, other portions of the main bay and tidal rivers have much better oxygen conditions so be sure to check the full forecast and the depth for conditions in your area.

There will be above average tidal currents Wednesday and Monday and Tuesday as a result of the upcoming new moon July 12.

For more detailed and up-to-date fishing conditions in your area of the bay, be sure to check out Click Before You Cast. 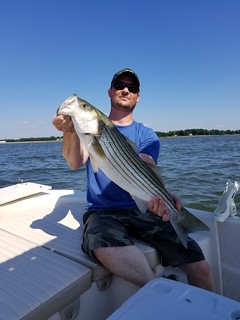 Movement of striped bass tends to be in flux again this week as a considerable amount have moved to the Love Point and Swan Point fishing locations, and some have drifted even farther up the bay along channel edges and shoals areas. Chumming remains the most popular way of fishing at these locations and the Baltimore Light/Sandy Point channel edge that was so popular last week. The best fishing tends to be along the 16 to 25-foot edge on the last hour or so of each tide.

Trolling with red and green hoses – as well as gold spoons and swim shads behind umbrella rigs – has been a good way to cover the channel edges in the upper bay and at structure such as the sewer pipe near the Bay Bridge. Jigging can be a good option when fish can be spotted suspended near structure, and the Bay Bridge piers in 25 feet or more of water tend to hold fish.

Farther up the bay near the mouth of the Susquehanna River, live lining white perch or fishing with fresh cut baits of white perch has been a popular way to catch striped bass. The smaller white perch are available and when fished down deep on some of the channel edges, striped bass cannot resist. There is also an early morning topwater bite for those casting poppers along the edges of the Susquehanna Flats and shoreline structure areas near Pooles Island and Baltimore Harbor.

Most boats leaving middle bay ports are making the run to upper bay chumming sites, but some wishing to fish closer to home are finding some action at the outside edge of Hacketts Bar and edges at Thomas Point. Trolling a mix of hoses, gold spoons and swim shads along channel edges and any bottom structure such as ballast stone piles has been a good alternative to chumming. When fish can be found suspended in some areas, jigging can be productive. The steep channel edge off Tilghman Point in Eastern Bay is a good place to check for suspended fish as is Thomas Point.

Casting topwater lures during the early morning hours along shoreline structure such as the rocks along Poplar Island and shoreline structure can offer some exciting fishing. Casting swimshads and jerkbaits can also be very productive in deeper areas away from shallow grass.

Locals are finding some good chumming opportunities for striped bass at the rock piles above Point Lookout and the channel edges off St. Georges Island in the lower Potomac River. Trolling has been fair to good along the eastern and western edges of the shipping channel with a mix of red and green hoses, gold spoons, bucktails and swimshads. There has also been good trolling action in the lower Patuxent River and lower Potomac River. 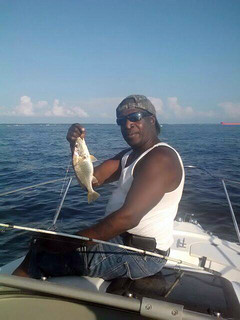 Casting topwater lures and swimshads has been offering some good striped bass fishing in the early morning and late evening in the lower Patuxent River, St. Mary’s River and the Eastern Shore from Hoopers Island south to Pocomoke Sound. Most of the striped bass being caught are small but there are a percentage of larger fish and a few speckled trout can be in the mix in the Tangier and Pocomoke sounds.

Bottom fishing for a mix of blue catfish, croaker, large spot and white perch has been good in the lower Potomac and Patuxent rivers. In Tangier and Pocomoke sounds, the action is very good and the croaker fishing seems to be improving each week.

The salinity of the water continues to show the effects of the large amount of runoff from last month, and is very low as compared to what is typically normal for this time of the year. This may explain why the cobia have put on the brakes in regards to moving up from the Virginia region of the bay. Until the salinity climbs back up, which will happen if current forecasts continue, cobia, bluefish and Spanish mackerel may move into Maryland waters in late July or early August. The good news is that there are no sea nettles in the middle and lower bay regions at this time.

The lazy days of summer are surely here and just about every species of fish is feeling the heat. Fortunately there are still good flows in most of the western region trout management areas, and there are good fishing opportunities in the catch-and-release areas for fly-fishing and light tackle spin cast. The delayed harvest areas have seen a lot of fishing since June 16, but still hold good numbers of trout.

Fish such as trout and walleye are holding deep at Deep Creek Lake. The trout can be found along the dam face and walleye can be found in the evening hours along deep grass edges and deep rocky slopes. Largemouth bass can be found shallow early in the morning and then under floating docks during the day or other shoreline shade. Smallmouth bass will also be looking for shade near deep structure or deeper waters near floating docks. 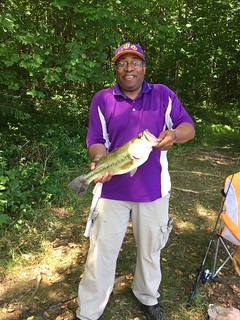 The upper Potomac River has calmed down considerably and fishing for smallmouth bass can offer some action. The warmer water temperatures tend to slow down the fishing for the larger smallmouth but they can be found in some of the deep ledge area and pools. Smallmouth bass in the 10 to 14-inch size range tend to be the most active fish, and they can be seen taking emerging aquatic insects such as mayflies.

Largemouth bass are now well entrenched in a summer mode of behavior and thus limit most of their feeding activity to nighttime in the shallower areas. It takes a dedicated bass angler to be out on the water before sunrise these days, but that is when they are most active. The water is a little cooler and the largemouth bass are still looking for food before loafing off for the rest of the day in some shady spot. Stick worms and a variety of soft plastics cast into grass or topwater lures over the grass are a good tactic. In many areas, northern snakeheads will be part of that surface action, especially when one is casting buzzbaits. Later on in the morning flipping soft plastics under docks, into fallen treetops, through thick grass and brush will often get a subtle pickup.

Fishing in and around Ocean City is in full summer mode this week. Surf casters are catching a mix of kingfish, blowfish, flounder and bluefish in the surf. Bloodworms, squid and cut baits have been the more popular baits. Inshore sharks are also being caught on larger baits.

At the inlet area, sheepshead, triggerfish and tautog are being caught around the jetties and to a lesser extent near the Route 50 Bridge. A few striped bass are being caught in the evenings on live eels and fresh cut baits drifted in the current. Flounder fishing has been very good in the inlet and the channels leading to it as well as the back bay areas. Traditional baits of squid and minnows always catch their fair share of flounder, but white Gulp swimming mullet baits tend to attract the attention of the larger flounder.

Outside the inlet there has been some exciting trolling action near the inshore shoal areas for a mix of Spanish mackerel, cero mackerel, small king mackerel and bluefish. This is an unusual event and should not be missed. It is not too often that Ocean City anglers get a crack at these mackerel species. Various silver spoons trolled behind inline weight have been doing the trick.

Farther offshore, the fishing for sea bass and flounder near the wreck and reef sites has been good. Those fishing out at the deepest locations are catching the largest sea bass and even some blueline tilefish.

Offshore trolling from the Wilmington Canyon to the Norfolk Canyon is very good this week. Some of the yellowfin tuna being caught are 50 pounds or more. Those chunking are also catching their share of yellowfin tuna. Blue marlin and white marlin are being caught as well as dolphin.

“Time is but the stream I go a-fishing in. I drink at it; but while I drink I see the sandy bottom and detect how shallow it is. Its thin current slides away, but eternity remains. I would drink deeper; fish in the sky, where the bottom is pebbly with stars.” — Henry David Thoreau, 1854