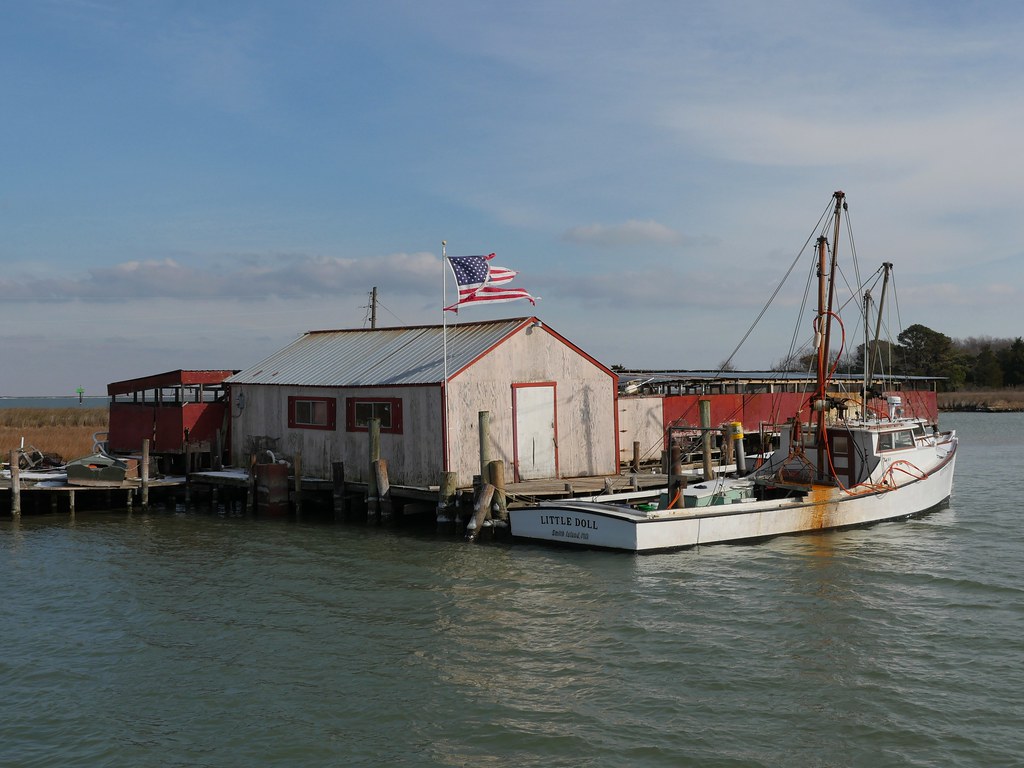 The U.S. Army Corps of Engineers, Baltimore District, in coordination with the Maryland Department of Natural Resources; Somerset County; Maryland Department of Housing and Community Development; U.S. Department of Housing and Urban Development; Smith Island United, and other partners, marked the completion of two major milestones as part of the Army Corps navigation improvement project at Rhodes Point during a ceremony at the Somers Cove Marina in Crisfield June 21.

This month, through a $6.88-million Army Corps contract, Coastal Design & Construction Inc., a small business out of Gloucester, Virginia, completed the construction of two jetties to prevent shoaling in the channel and to reduce the continual need for dredging. The construction of a stone sill was also completed along 850 feet of eroding shoreline south of the mouth of Sheep Pen Gut to prevent further erosion and contain material dredged as part of the project.

Following partner remarks, an extra piece of stone from the jetty project was signed by officials. The stone is to be placed at the Smith Island Cultural Center in Ewell. At the conclusion of the presentations, select officials in attendance boarded Department of Natural Resources Research Vessel Kerhinto view the project site.

While the main purpose of this project is to improve navigation, the environment will also benefit. Vegetation will be planted on the clean dredge material placed behind the stone sill. The intent is to help restore, enhance and protect wetlands, as well as increase shoreline resiliency.

Later this year, as another part of this project, a portion of the federal navigation channel in Sheep Pen Gut will be realigned through dredging. Until then, project members encourage boaters to remain vigilant when navigating through this area.

“The goal of this project is to prevent further erosion and to provide boaters from the Smith Island towns of Rhodes Point and Tylerton with more direct access to the Chesapeake Bay — as watermen have lost time and money because of the need to take inconvenient routes around the island,” said Col. Ed Chamberlayne, U.S. Army Corps of Engineers, Baltimore District commander. “With the completion of the stone sill, jetties and upcoming dredging, we are thrilled to be able to contribute long-term beneficial impacts to the people and economy of Smith Island.” “I’m greatly encouraged to see this tremendous progress, as we assure the navigational lifeline to the people of Smith Island and simultaneously work to restore and preserve the island’s shoreline,” said Maryland Natural Resources Secretary Mark Belton. “This effort is exemplary of our many strong partnerships throughout Maryland to leverage the wise use of our resources and build the resilience of our communities for future generations.”

“The completion of this navigation project will be of great value to the watermen in our county,” said Randy Laird, Somerset County Commissioners president. “The project will provide positive impacts to our local economy and safer travel for our watermen and recreational boaters, alike. The materials dredged from the project will be beneficially reused for restoration, enhancement and protection of wetlands. We cannot thank our partners enough for bringing this project to fruition.”

“We have been happy to join with the State of Maryland and the Corps of Engineers to contribute funds to help Somerset County recover from Hurricane Sandy and to become more resilient for the future,” said Charles Halm, U.S. Department of Housing and Urban Development, Baltimore Field Office, Community Planning and Development director. “Disaster recovery, thank goodness, is not something our office deals with on a day-to-day basis, and it is gratifying to work with a fellow federal agency that has such a wealth of experience and expertise in this area.”

“The Rhodes Point jetty and shoreline stabilization projects will improve the sustainability of Smith Island and the quality of life for residents, and we were proud to support this important project with Community Development Block Grant disaster funds,” said Maryland Department of Housing and Community Development Secretary Kenneth C. Holt. “This program has been vital to recent disaster recovery efforts as a result of Hurricane Sandy and other redevelopment in Somerset County and has been instrumental in revitalization efforts in many rural Maryland communities.”