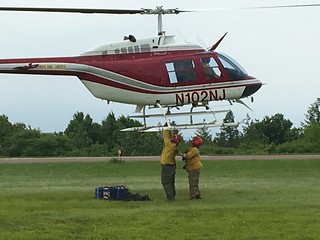 More than 180 students participated in the academy, which was hosted at Garrett College by the Maryland Department of Natural Resources along with Mid-Atlantic Forest Fire Compact and the U.S. Forest Service.

Compact members promote effective fire prevention and the control of wildfires in the Mid-Atlantic region.

“These 35 graduates have sharpened the skills necessary for wildland firefighting in Maryland and nationwide, and will prove to be essential crew members when they’re deployed to action sometime this season,” Maryland Forest Service State Fire Supervisor Monte Mitchell said.

Participants in the academy gained important knowledge about wildland fires, including how these blazes ignite and spread, methods for containment and best practices for extinguishing the flames. Students also took part in hands-on skill-building exercises, such constructing fire lines, securing supply loads to helicopters and deployment of fire shelters while working an incident.

Wildfires are a common occurrence in Maryland. In an average year, the department responds to an average of 325 wildfires that burn more than 3,200 acres of forest, brush and grasses. The state’s fire departments respond to more 5,000 wildfire incidents per year.