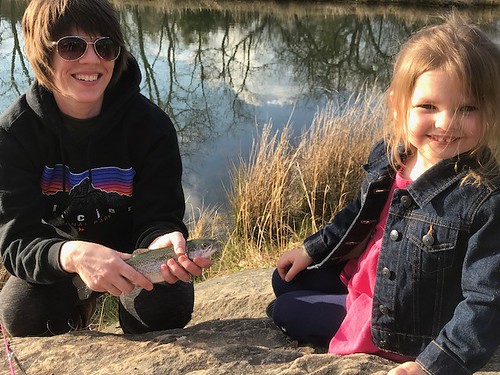 Violet Sisler spent a fun time with her mom using her Barbie fishing rod to catch her first trout. The smiles say it all! Photo by Rebecca Sisler

Warmer and more seasonable weather has finally descended upon the Maryland landscape, offering a wonderful time to enjoy the outdoors. The warm air temperatures and sunny weather, along with relatively cool water temperatures make for perfect fishing conditions in many local waters.

Community ponds, trout management waters and lakes offer fun shoreline fishing adventures that are particularly tuned for children. Many are stocked with bluegills, and some are stocked with trout and set aside for youth fishing. There are also fishing rodeos and other youth events held all over the state.

Bay water temperatures should quickly rise into the low and mid-60s and speed up the progression of rockfish spawning and shad moving into the upper bay creeks, now lined with bluebell and may apple.

Maryland’s portion of the bay continues to have suitable oxygen conditions from surface to bottom. In addition, there are slightly warmer surface water temperatures, so anglers may want to scan these shallower areas for fish during conditions of moving water and low light, after sunset and before sunrise.

Main bay water temperatures are in the high 50s as reported from the National Oceanic and Atmospheric Administration buoys at Annapolis, Gooses Reef and Potomac River near Point Lookout State Park. Temperatures should increase through the week and expect temperatures in smaller, dark-bottomed shallow creeks to hold much warmer temperatures. As tides empty the water in these warm creeks, look for nearby structure to target feeding gamefish. 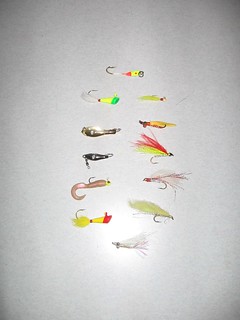 The Susquehanna Flats catch-and-release striped bass fishing is steadily improving and may take a big leap with warmer weather this week. There have been some reports of striped bass spawning in the Elk River, and water temperatures in the flats area are generally in the 50s. There are a lot of small male striped bass being caught on jigs and swimbaits with some large females also being caught at times. The biologists keeping watch on the Susquehanna Flats spawn sampled the channels south of the Elk Monday. They saw few large female striped bass in their survey work but a lot of males.

The Conowingo Dam has been releasing substantial amounts of water this week, from the morning through the evening hours.

Those who love the hickory shad catch-and-release fishery at Deer Creek and Octararo Creek in the lower Susquehanna River have been anxiously waiting; it should be coming soon. Right now both creeks are running stained and chilly, but with no rain expected until the weekend, a couple of days of 80-degree weather may be all it takes get water temperatures to 60 degrees and kick this fishery into gear. I suspect when it happens it will be a big run, since the hickory shad are overdue and have been waiting out chilly water for some time in the Susquehanna.

The mouth of Deer Creek is a great place to fly-fish for the beginner or the veteran; there is plenty of room to cast and the hickory shad are eager to take a variety of small, flashy lures. Small crappie jigs, shad darts and colorful or flashy flies work well. A 7-weight fly rod is a good all-around round choice, and a sinking tip or sinking line works well. Casts are quartering to the current and most hits occur on the down current swing while retrieving. Hickory shad hit hard and often jump like mini-tarpon. Those with spinning tackle can use shad darts, small jigs or spoons. 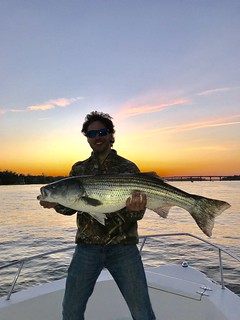 Those looking for some light tackle jigging action have been finding it this week at the Bay Bridge piers and rock piles. The striped bass being caught and released are resident size, but offer some fun action. Unfortunately windy conditions hampered the efforts of many last week and there was even some dense fog on the weekend. Water temperatures in the middle bay region are about 56 degrees this week, and hopefully better conditions will prevail.

The striped bass spawning continues in the Choptank River and with higher temperatures there is bound to be another large surge later this week. Large post-spawn striped bass from the Choptank reached the bay over the weekend, and the steep channel edge at the CP Buoy and False Channel were good places to intercept them. The Bloody Point Light, Buoy 83 and Thomas Point are also popular edges, and there were reports of a few fish caught there earlier this week.

Fishing – or perhaps we should say catching – of large post-spawn striped bass started to kick into gear early this week in many of the traditional channel edges in the lower bay region.

Water temperatures in the Nanticoke, Patuxent and Potomac rivers have reached levels that are suitable for substantial spawning. Large post-spawn striped bass are beginning to show up along steep channel edges between St. George’s Island and Piney Point in the lower Potomac. The Cove Point, Cedar Point and Point No Point edges have also been producing fish.

On the eastern side of the bay the steep edge from Buoy R76 south past 72B and the HS Buoy have been good places to troll. The Hooper Island Straits and the main channel edge in Tangier Sound have also been good places to intercept post-spawn striped bass exiting the Nanticoke River.

White perch are steadily moving down the tidal rivers after spawning and should start to fill into their typical summer haunts by the end of the month. At present they can be intercepted along the way in the lower sections of the tidal rivers by fishing with pieces of bloodworms on bottom rigs. There are many shoreline areas to fish from land or from small boats in the middle and lower regions of the tidal rivers. On the Choptank River, the Bill Burton Fishing Pier State Park has been a great place to catch white perch this week. Channel catfish can also be part of the mix as well as post-spawn yellow perch. Cut bait made from small white perch makes a good fresh bait for the catfish, and small minnows work for the yellow perch.

In the tidal Potomac, blue catfish dominate the scene – there sure are plenty of them and a large cooler can be filled in short order. 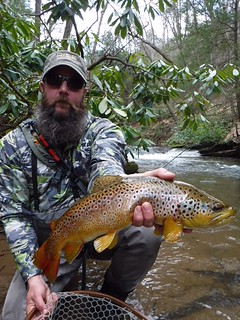 This beautiful brown trout fell for a streamer fly and was released back into Bear Creek this past weekend. Photo by Matt McGee

Spring trout stocking continues this week in many of the state’s waters. The Patapsco River received almost 2,000 trout this week. As the middle of May approaches the remaining spring stockings will begin to shift toward the western region waters. This is due to higher water temperatures in the central, eastern and southern regions, making those areas unsuitable for stocking rainbow trout during the summer months. Some of the cooler tail water trout management waters in the central region will be the exception.

Fishing for smallmouth bass and walleye has been good at Deep Creek Lake this week. Largemouth bass are beginning to move toward shallower areas and northern pike can be found at the mouths of the major coves.

The upper Potomac River has settled down and fishing for walleye and smallmouth bass will be the focus of most fishermen this weekend. Soft plastic jigs worked slowly and close to the bottom in channels, pool areas and current breaks should bring some action.

Largemouth bass are in various stages of the spawning process this week depending on water temperatures. Shallower ponds tend to warm up quicker than large bodies of water such as tidal rivers and reservoirs. In most waters except those of the western region male largemouth bass are finning out nests in the shallower spawning areas and female largemouth bass are either on the nests or holding in slightly deeper water nearby. Good tactics include casting crankbaits, spinnerbaits or soft plastic jigs in the deeper transition areas near the shallow spawning beds or casting lipless crankbaits and jerkbaits in the shallower areas.

Northern snakeheads will be found in the same areas and are becoming a more common catch. 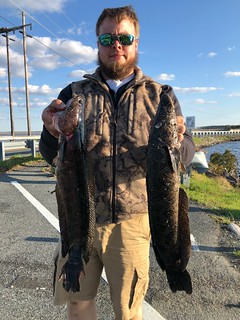 Ryan Jones holds up a hefty pair of snakeheads he caught in lower Dorchester County. Photo by Angelina Watts

As water temperatures begin to warm up along the coast, fishing opportunities are expanding.

Surf casters that are fishing with bait are being kept busy with clear-nosed skates, but in between they are catching medium-sized black drum on clam or sand flea baits. They are also catching sub-legal striped bass on cut bait or by casting swim shads.

At the Ocean City Inlet and Route 50 Bridge area, a few tautog are being caught on pieces of green crab and sand fleas. The very bottom of an outgoing tide and early slack tend to offer the best chances of catching them. The season will remain open until May 16 and then will be closed until July 1.

There are a few flounder in the back bay areas, enough to make fishing interesting, and most of them are fairly sized. The outgoing tide tends to spur them into biting, which pulls warmer water out of the shallower parts of the bay. Sub-legal sized striped bass are providing some fun catch and release action at the inlet area and the Route 90 Bridge area for those casting swimbaits and jigs.

Outside the inlet the focus has been on fishing for tautog at the nearshore wreck and reef sites. Water temperatures have been holding around 50 degrees, and the tautog are biting well. Some large tautog are being reported. Green crabs tend to be the most common bait.

“I still don’t know why I fish or why other men fish, except that we like it and it makes us think and feel.” – Roderick l. Haig-Brown 1946