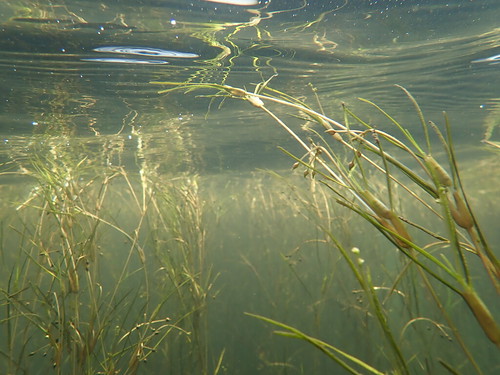 The Maryland Department of Natural Resources reports 2017 was the third consecutive record-breaking year for underwater grass abundance in Maryland’s portion of Chesapeake Bay.

An annual baywide survey showed 62,356 acres of underwater grasses were mapped in Maryland’s tidal waters, a 5 percent increase from 2016. This is the fifth straight year of expansion for Maryland’s underwater grasses, which surpassed the 2017 restoration goal of 57,000 acres in 2015 and continues to rise.

“The continued record growth of underwater grasses shows tremendous progress for Maryland and our partners in improving and restoring water quality throughout the Chesapeake Bay watershed,” Maryland Natural Resources Secretary Mark Belton said. “Knowing that the hard work by many Marylanders has gotten us here should provide the incentive to keep moving forward to a cleaner, healthier and more resilient bay.”

“It’s exciting to witness this historic recovery of grasses in the bay,” said Brooke Landry, underwater grass biologist with the department who chairs the Chesapeake Bay Program’s SAV Workgroup. “Maryland’s commitment to improving the bay’s water quality is clearly paying off and it provides such a good example of what we can achieve with sustained efforts to reach our goals. While we’re only a bit over halfway to our ultimate restoration goal, we have surpassed our 2017 goal two years early and are on track to meet our 2025 goal.”

An additional five river segments in Maryland reached 75 percent or more of their restoration goals. In the lower Nanticoke River, underwater grass was observed for the first time since the survey began in 1984.

The rise in underwater grass is attributed not only to a continued expansion of widgeon grass in the moderately salty mid-bay region, but to an expansion of freshwater grasses, like wild celery that grow in the upper reaches of rivers and tidal fresh portions of the bay. Maryland’s biggest and most iconic underwater grass bed, located in the Susquehanna Flats, has been steadily recovering since 2012, when grass beds were significantly reduced from high flows related to Tropical Storm Lee in 2011, and reached more than 6,100 acres (9.5 square miles) in 2017, showcasing the bed’s continued resilience.

The annual aerial survey was conducted by the Virginia Institute of Marine Science between May and November 2017 and covered 189 flight lines. The aerial imagery is used to identify the amount and location of underwater grasses in the Chesapeake Bay and tidal tributaries. For the first time in years, there were no air space restrictions or weather constraints, so a complete survey of the entire bay was conducted.