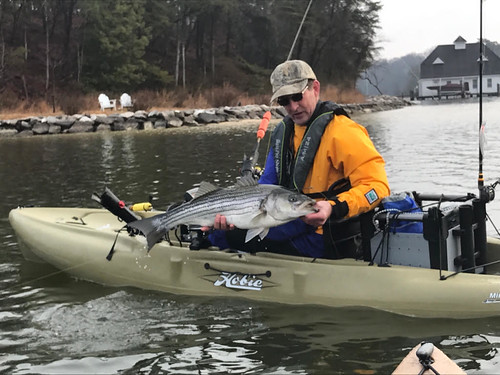 Cold nights and chilly days have prevailed far too long in the past couple of weeks, but change is on the way, with air temperatures of 80 degrees promised for the weekend.

We are a little more than a week away from the opening day of the trophy striped bass season and it would be safe to say that fishermen and charter boat captains are anxious and ready, even if the striped bass may not be.

They are on their own schedule, and spawning is governed by two major factors — water temperatures and photoperiod, which is basically the amount of sunlight exposure the fish get each day. Spawning typically takes place when water temperature hit the high 50s, and 64.5 degrees is optimal.

Before we get into this week’s fishing report, I want to remind everyone that they can submit their own fishing reports and photos to the Maryland Angler’s Log. To post a report, please email your name, hometown, photos, location and additional content for your report. All information is optional, but encouraged.

At present water temperatures in the spawning reaches of the Choptank River are around 52 degrees at best. Biologists discovered a small amount of striped bass eggs this week in the Choptank but they were unfortunately dead, most likely due to cold water conditions. This weekend’s warm weather will do much to elevate water temperatures, but conditions are predicted to return to more moderate temperatures next week.

We will experience more unstable weather for the second full week of April with windy conditions from Thursday through Sunday. However, air temperatures are finally beginning to climb and will provide increased warming of Maryland bay waters for gamefish preparing to spawn in the next several weeks in Maryland waters. Temperatures on the Susquehanna Flats are hovering around 50 degrees as the trophy rockfish season approaches.

The Maryland portion of the bay continues to have suitable oxygen conditions from surface to bottom. In addition, there are slightly warmer surface water temperatures so anglers may want to scan these shallower areas for fish during moving water and low light conditions after the sunset and before sunrise.

As reported from the National Oceanic and Atmospheric Administration buoys, main bay surface water temperatures are holding at about 47-48 degrees at Annapolis, Gooses Reef and Point Lookout. In addition, expect temperatures in smaller, dark-bottomed shallow creeks to hold slightly warmer temperatures. As tides empty the water in these warm creeks, look for nearby structure to target feeding gamefish. Expect below-average to average flows for the Susquehanna and Potomac and for smaller rivers and streams entering the bay. There will be above average tidal currents all week as a result of the new moon April 16. 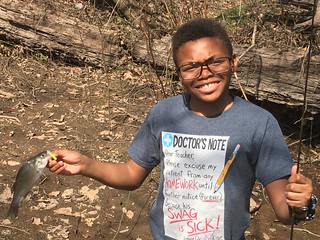 This young angler is all smiles about the sunny weather and his first white perch. Photo by Charles Vinson

Water flow conditions have been brisk at the Conowingo Dam causing cold, strong currents in the lower Susquehanna River this week. The striped bass catch-and-release fishery in the lower river and Susquehanna Flats area is very slow as might be expected with the cold water temperatures. Anglers are reporting quite a few small male striped bass are being caught by casting soft plastic jigs. A few fly-casters are using large Clouser flies with sinking fly lines with some success on the smaller fish. The best reports on large female striped bass are coming from those trolling or casting large joined swimming jerkbaits and crankbaits that dive to medium depths during the evening hours.

There has been a limited amount striped bass catch-and-release fishing success in the upper bay region recently around traditional channel edges. The channel edges at Love Point, the mouth of the Magothy, Podickory Point and the Bay Bridge piers and rock piles have been popular places to check for suspended fish. Jigging with soft plastic jigs has been a good tactic but some are also trolling. Trolling for large striped bass near the channel edges has been very slow this week.

There continues to be good fishing for white perch in the upper reaches of many of the region’s tidal rivers this week. Most areas are seeing water temperatures at about 50 degrees and it is expected they will rise with the predicted warmer weather later on this week. If true, this could be the big weekend for a white perch spawn. Also of note the hickory shad are arriving in the lower Susquehanna and will be holding there until water temperatures in Deer Creek hit the upper 50s or better. 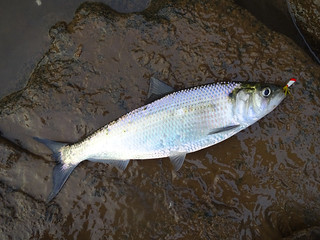 Water temperatures in the middle bay region are holding around 46 degrees Wednesday but with 80-degree air temperatures and sunny skies predicted for the weekend they should rise into the low 50s. At present there has been some catch-and-release action for striped bass along popular channel edges. Many are light tackle jigging over suspended fish when they can find them and are mostly catching medium-sized striped bass. Larger female pre-spawn striped bass are being caught now and then but most of that action has been at the Calvert Cliffs Nuclear Power Plant warm water discharge. Jigging with large soft plastics while drifting in the discharge current is the way this location is fished.

I received a call this week from Maryland Department of Natural Resources biologist Chuck Stence that their electrofishing crew was encountering large numbers of spawning white perch and hickory shad in the Choptank River above Greensboro. In fact they are seeing so many hickory shad that the Choptank River population can be considered restored. The Fisheries Restoration and Enhancement program has worked very hard for many years to restore once lost spawning populations of hickory shad, American shad and river herring species to many of the tidal rivers in Maryland. Catch-and-release fishing for these species has been popular and will gain more popularity in the future. Restoration of these species helps complete the tapestry that is the Chesapeake Bay.

The white perch will be spawning through this weekend and will travel all the way up to the Red Bridges gauging station. Casting 1/8 ounce shad darts with or without a piece of bloodworm or cut minnow will do the trick. A considerable amount of throwbacks is usually in order, so a small “J” style dehooking device can be a real asset to save your hands from spines and sharp gill plates. The hickory shad are strictly catch and release and will take the same shad darts.

Catch-and-release fishing for striped bass is the only game in town this week in the lower bay, and it is slow. A few boats can be seen trolling along the traditional steep edges of the shipping channel looking for large pre-spawn striped bass heading up the bay. Except for the upper bay Susquehanna Flats area, most large female striped bass have already arrived in their spawning rivers. The exception may be the tidal Potomac River which unlike other spawning Rivers is open for catch and release striped bass fishing. Smaller male striped bass and larger females can be found holding in the region of Indian Head up to the Wilson Bridge. Also of note is that hickory shad and American shad have been reported in the Chain Bridge area within the District of Columbia.

Fishing for blue catfish has been excellent in the tidal Potomac near the Fort Washington area and some of the main tributaries. The larger blue catfish will be feeding on the newly arrived hickory shad as well as white perch. Many of those who fish for the blue catfish over 50 pounds often use live bait such as white perch, gizzard shad or live goldfish called “Salties” which can be purchased from bait suppliers.

Crappie fishing in the tidal Potomac has been exceptional this week as pre-spawn females can be found holding near deep structure. Marina piers and docks, bridge piers, breakwaters and fallen tree tops are all good places to look for them. Using a slip bobber with either a small jig or minnow is a great way to catch them. They can also be found in the upper Patuxent River and the tidal rivers of the Eastern Shore.

Fishing for white perch continues to excellent in the Nanticoke, Pocomoke, Patuxent and tributaries of the Potomac River. Many of these areas will most likely see a peak of activity as predicted warmer weather later on this week should elevate water temperatures in the spawning areas. 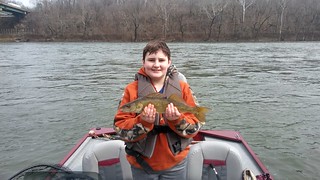 Crappie have been providing good fishing near deep structure at Deep Creek Lake this week and smallmouth bass are becoming more active. Northern pike can be found near some of the larger coves often near the mouths of those coves. Yellow perch can be found along deep grass edges and steep shorelines.

Crews continue to stock the trout management waters and provide fun fishing in the put-and-take areas as well as other trout management options such as delayed harvest. This is a wonderful time of year to spend some time on Maryland’s trout waters and it offers a wonderful family experience. Parents should also keep in mind that some special areas are set aside for youth fishing, seniors or blind fishermen. Information on where and when trout are being stocked can be found on our trout-stocking website.

Largemouth bass are now in a pre-spawn pattern of activity. The female largemouth bass are holding in transition areas near structure and feeding aggressively on crayfish and baitfish. Good lure choices could be soft plastic jigs, hair jigs, grubs, crankbaits and stick worms. The smaller male largemouth bass tend to be shallower and closer to the spawning areas. Small crankbaits, spinnerbaits, jerkbaits and soft plastics are all good choices when fishing these areas. Northern snakeheads are starting to hold in these shallower areas and may also be encountered.

Crappie are active and can be found near structure in deeper areas of ponds, reservoirs and tidal rivers. Marina piers, bridge piers, docks, sunken brush, fallen tree tops are all good places to look for pre-spawn crappie. Small jigs or minnows under a slip bobber is a sure fire way to catch them. Chain pickerel are very active and are present in a wide variety of waters throughout Maryland. Channel catfish are also very active in most of the tidal rivers feeding into the Chesapeake Bay and tend to provide a relaxing kind of fishing from shorelines or small boats.

Inshore waters remain a chilly 41 degrees this week and the tautog fishing at the wreck and reef sites in 60 feet of water or less has been very good this week. The boats that have been going out are finding good catches by using green crabs, white-leg crabs and clams. One captain noted that the female tautog are getting ready to spawn.

Inside the Ocean City Inlet there has been some catch-and-release action near the Route 90 Bridge with striped bass measuring less than 28 inches. Soft plastic jigs, bucktails and paddletails tend to be the more popular lures being used.

“The years will bring their Anodyne, but I shall never quite forget the fish that I had counted mine and lost before they reached the net.” – Colin Ellis, 1963