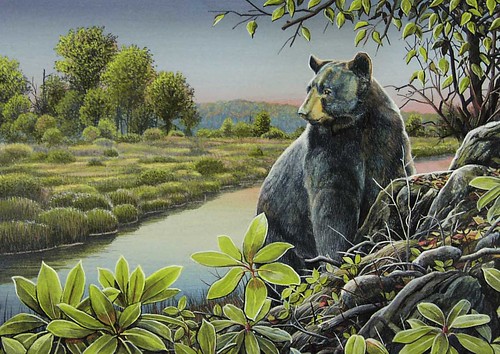 “Looking Back” by Steve Oliver

The winners were chosen by a panel of judges March 17 at the 18th Annual Eagle Festival at Blackwater National Wildlife Refuge in Cambridge.

“Congratulations to the winning entries and thank you to everyone who submitted terrific artwork this year,” Wildlife and Heritage Service Director Paul Peditto, said. “Every entry showcases the talents of some gifted artists while supporting important conservation efforts to understand and protect our wildlife.”

Steve Oliver of New Castle, Delaware won the 22nd Annual Maryland Black Bear Conservation Stamp Design Contest with his painting, “Looking Back.” The artwork portrayed a lone black bear sitting on the edge of a creek with the first hints of fall. This is his eighth win since first entering the contest in 2000.

“This is fun for me and I enjoy helping out conservation programs whenever I am able,” Oliver said. 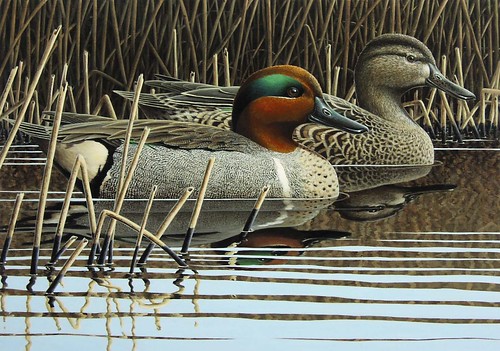 This is the first year that the Maryland Migratory Game Bird Stamp Design Contest was opened to artists from outside Maryland. Entries were received from artists in seven different states and was highly competitive.

“I have been hunting for around 35 years and entering waterfowl stamp design contests for 32 years,” Bridgford said. “I was happy to see Maryland open up their contest to nonresidents.”