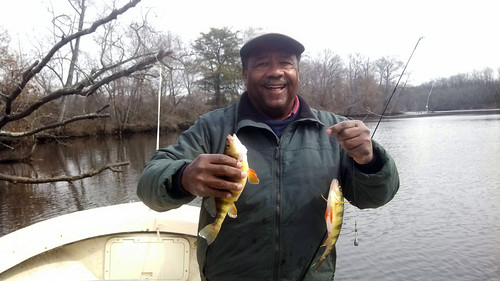 Most everyone has some observations they consider harbingers of spring. It could be as simple as crocus or daffodils popping up in the yard, geese flying north or even the sound of spring peepers in a nontidal wetland, singing the evening away.

For many anglers spring means fishing for yellow perch and white perch as they begin their annual spawning runs in Maryland’s tidal rivers – and they take center stage for the next couple of weeks. Both yellow and white perch are now being caught in various tidal rivers and creeks, but the best is yet to come.

The yellow perch spawning runs may peak in the next week and the bulk of the white perch runs will follow shortly, depending on water temperatures. Warm and sunny weather will move the action along; cold, cloudy days will hinder it. Many an angler has stopped by his favorite fishing hole to ask that classic question about yellow perch fishing, only to receive the equally classic answer, “you should have been here earlier.” Hopefully some of the following tips will help. Currently, water temperatures in many of the upper reaches of the tidal rivers are in the range of 43 to 48 degrees. The optimum spawning temperature range for yellow perch is 48 to 54 degrees; for white perch it’s 59 to 60 degrees. The tidal waters on the western side of the bay typically will run a little warmer than the same latitude on the eastern side. At a low ebb tide the perch tend to sit it out in deeper holes and a flooding tide will push them further upstream toward their spawning habitat.

As with any species, the males are the first to arrive for the party and this past week male yellow perch have been the dominant catch in many areas. That is about to change. The minimum legal size for yellow perch is 9 inches and you are allowed to catch 10 per day. It takes about four years for a yellow perch to measure 9 inches or more, and males stop growing at 9.5 inches in length. 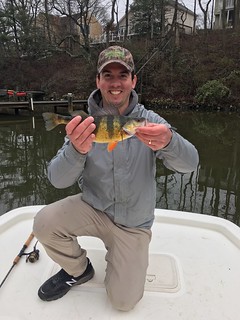 Fisheries biologist Paul Piavis was kind enough to send us a few observations on yellow perch populations this year: “There is a definite, strong 2014 and 2015 year-class presence this year, but it’ll probably take another year or two to enter into the recreational fishery. They are strong enough that anglers should expect to have to cull through a lot of undersized fish, but bigger fish are out there. The 2011 year-class is still kickin’ it.”

Minnows hooked through the mouth with a shad dart or hook under a bobber or a two-hook bottom rig are good choices when the perch are holding in the deeper parts of the upper reaches of the tidal rivers. Casting a shad dart with a minnow or a piece of a minnow – or a scent-enhanced piece of felt on the hook – is also a great way to fish and cover areas when searching for that hole that contains the mother lode of yellow perch. Small, crappie-type curly-tail plastic jigs are popular and can also work well when live bait is scarce.

Some white perch are being caught in the tidal rivers of the upper bay region as well as chain pickerel; fishing for channel catfish has been excellent.

In the middle bay region, the yellow perch fishing is on schedule in many of the region’s tidal rivers. The yellow perch have made their way up the rivers to where they narrow down to widths of 30 yards or less. The white perch are a few miles downriver, but steadily moving upriver. For example, the upper Tuckahoe River in the Hillsboro area and the upper Choptank River near Goldsboro have been good places to catch yellow perch. Most of the white perch can be found in the Denton area on the Choptank River but they have been caught recently all the way up to Red Bridges in the Goldsboro area. A mix of chain pickerel, crappie and channel catfish are often in the mix. 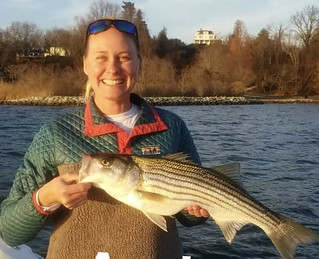 Jane Miller enjoyed a sunny day on the bay jigging and was all smiles with this nice fish before slipping it back into the bay. Photo by Kevin Thomas

There is some catch-and-release fishing taking place in the middle bay region, as male striped bass begin to nose into the lower sections of the tidal rivers and large female striped bass enter Maryland waters in the bay. The Calvert Cliffs Nuclear Power Plant warm water discharge has been getting plenty of attention for those looking to tangle with trophy-sized striped bass. This is a game of positioning in the warm water plume and jigging while drifting away in the current. Jigging around promising looking structure near river mouths can offer some action with smaller striped bass.

The lower bay region has some catch-and-release opportunities, but cold water temperatures could dampen them because striped bass will be sluggish. Most anglers will focus their attention on pursuing yellow perch this week, and in another week or so the white perch spawning runs. The Pocomoke River and the creeks flowing into the Potomac River offer good fishing from small boats or shorelines. 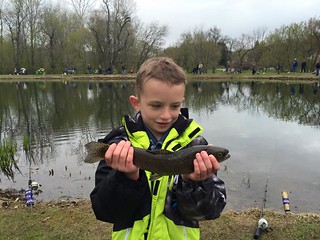 Freshwater anglers have been enjoying the generous preseason stocking of trout in a wide range of trout management waters. Some of the areas are beautiful streams that cascade through the mountains of western Maryland and others are simple community ponds where everyone can enjoy some fun fishing close to home. For our younger anglers, these ponds offer grassy banks where they can watch for that twitch of a bobber, indicating a fishy interest in a tasty offering like a garden worm.

Preseason stockings are posted on the trout stocking website as they occur, but unlike in-season stockings, exact dates cannot be predicted due to weather and crew schedules. Trout anglers wishing to cash in on the put-and-take areas will need to keep a watch on the trout stocking website, or better yet get immediate notification through Facebook, Twitter or our email subscription service.

Many trout management waters are catch-and-release, fly-fishing-only and delayed harvest – upping the odds for targeting trout with fly-fishing tackle or artificial lures just for the fun of it, then releasing them for another angler to enjoy the same experience.

Although waters in the upper Potomac River are turbulent and stained at the moment, they’re expected to calm down soon, allowing good fishing to return. This is an excellent time of the year to enjoy the walleye fishing that the upper Potomac provides.

Largemouth bass are starting to shake off the winter blues, and although they are still sluggish due to cold water temperatures they can offer some action. They tend to be holding deep to structure but in some situations such as ponds, they will migrate up to sunny and windward sides of shorelines to catch a bit of afternoon warmth. Small lures such as grubs, soft plastics and paddletails worked slowly can entice bass to pick up a bait. 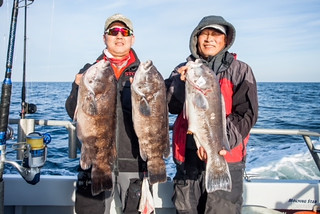 This is a great time of the year to fish for blue catfish in the tidal Potomac River, they seem to be everywhere and offer a lot of fun fishing and good eating. They can also be found in the Patuxent and Nanticoke rivers. Just about every tidal river in Maryland has healthy populations of channel catfish and they offer a unique fishing experience for shoreline anglers.

In the Ocean City area, fishing action is focused on tautog. When the boats can get out, they have been putting their patrons on some large tautog at times. Captains warn that sometimes the bite is off due to cold water temperatures, but this is the time of the year when those trophy-sized tautog are caught.

“Summer trout from those clear waters are good to look at, but a trout in the spring is a sight to behold — gold and silver with red fins, iridescent in the sun, full bodied, hard and icy cold as the lake itself.” – Sigurd Olson