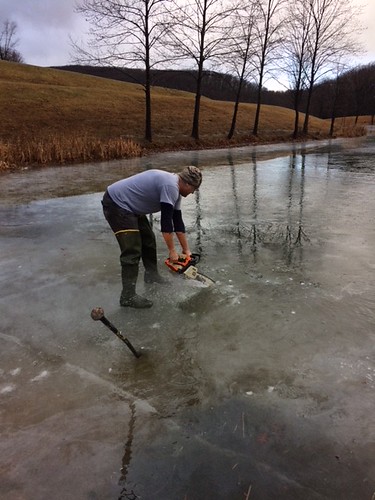 A member of the department’s trout stocking crew uses a chainsaw to cut into the ice at Greenbrier State Park.

Maryland started off 2018 with a deep freeze, and it remains to be seen what old man winter has in store for us in the next month. But as long as temperatures remain relatively moderate, there are all kinds of fishing adventures out there from the Atlantic Ocean to Mountain Maryland.

Anglers in the tidal waters of the Chesapeake Bay are mostly pursuing yellow perch and catfish species in the middle to upper regions of the tidal rivers. Water temperatures are holding in the mid to upper 30s in most tidal rivers and yellow perch are holding in some of the deeper areas, waiting for warmer water temperatures next month. Often these deeper holes can be found near narrow bends in the rivers and a good depth finder can help locate where the perch are stacked. A bottom rig baited with a minnow is always a good bet to catch them. 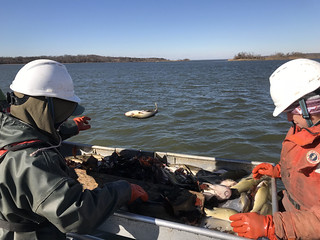 Biologists are conducting the annual winter trawl survey aboard the NOAA research vessel Chesapeake out of the Cooperative Oxford Lab, to acquire data on resident populations of finfish such as white perch, channel catfish and other species in the upper bay tidal rivers. Photo by Captain Mike Simonsen

In large waters — such as the lower Susquehanna River off Perryville, where there is a 40-foot hole where yellow perch traditionally stage — it will take considerable weight to hold bottom. In smaller and more sheltered waters you may be able to get away with as little weight as a couple of split shot. In smaller waters, a tandem rig of small shad darts is standard fare, and a piece of minnow placed on the hook or a small piece of red felt doped with anise or fish oil scents will go a long way to enticing yellow perch to strike.

On sunny afternoons, yellow perch can sometimes be found in shallower waters over dark mud on the sunny side of a river or creek. Casting small shad darts or lip-hooking a minnow with just enough split shot to get it to the bottom can be a good tactic in these areas. Slowly retrieve the minnow a few feet and then pause for a minute or so before reeling in another couple of feet. Of course if the rivers and creeks ice up again, all bets are off until the ice is thick enough to fish through — which at this point is rather doubtful.

If a trophy-sized blue catfish is on your bucket list, the next couple of months are a good time to target them. The deeper parts of the Potomac River channel and sections off Fort Washington are hot spots for this type of fishing. Fresh bait is of primary importance and finding live bait is often the biggest hurdle to this type of fishing — gizzard shad are often the best choice, while bluegills or white perch will work well also. Most anglers put out several stout rods with enough weight to hold bottom. If fresh catfish fillets are on your mind, smaller baits and rigs along channel edges will usually fit the bill. Small blue catfish can also be found in the upper Patuxent and Nanticoke rivers.

Channel catfish are abundant in most of the tidal rivers flowing into the Chesapeake Bay and can be found holding deep in the middle and lower sections of the rivers. Most fresh cut baits will do the trick and if you can keep it on the hook, chicken livers can work well. Nightcrawlers are another good bait, but small white perch can be pesky bait stealers at times. 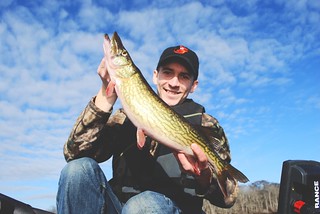 John Horwat enjoyed a day of fishing in his kayak and holds up a beautiful chain pickerel on an Eastern Shore river before slipping it back into the water. Photo by C J Wood

A fish that is active during the winter months and fun to fish for is the chain pickerel. They tend to transcend the limits of tidal waters and freshwater impoundments and can be found in a wide variety of areas. Popular spots to fish during the winter months them include the upper regions of the tidal rivers and creeks. Chain pickerel seem to enjoy cold water and offer anglers a good target for some fun catch and release fishing. Most anything that moves through the water will attract the attention of a waiting chain pickerel — they attack lures with total abandon since they are ambush predators — but certain lures offers better options. Treble hooks on spinners and jerkbaits catch chain pickerel, but unhooking these toothy critters can be difficult and damage gills. A good pair of fishing pliers is a good tool to have on hand. A single hook tends to be more kind to the fish. 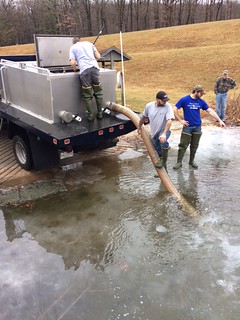 The preseason stocking of trout in the put and take areas and other trout management classified waters is well underway and offers good fishing opportunities, often close to home. The stockings are posted on the trout stocking website when they occur.

Besides the traditional creeks and streams being stocked many neighborhood ponds are being stocked. These ponds offer comfortable fishing opportunities for families and especially young children. They can be with mom or dad on solid ground and watch a bobber for the telltale twitch indicating a trout may be interested in what is on the end of one’s fishing line. When fishing for recently stocked hatchery trout, few baits can beat the scent- and color-enhanced commercial dough baits. Garden worms and minnows offer alternatives. Others love to cast small spinners, wooly buggers and the deadly spinner fly, with good reason since one can cover a lot of water and they are trout killers.

Trout stocking crews are working hard to get the trout out and catch up after being held up by the early January freeze. During that time period, hatchery raceways and holding ponds were iced in and made feeding and collection difficult. Once the raceways were clear and trout started to be loaded on trucks, crews used some unconventional methods at times to get trout out to frozen lakes and ponds. 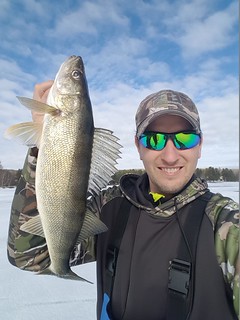 The cold weather in early January caused ice to develop rapidly throughout all of Maryland from the coastal bays near Ocean City to the Chesapeake Bay and to the far western counties. In the Chesapeake Bay ice in many areas was recorded to be 7 inches thick or more, bringing most boat traffic to a halt. These conditions, coupled with tides that seemed to not come back in for weeks, made it tough on the creatures of the bay and tidal rivers, from oysters to geese.

The ice conditions at Deep Creek Lake, which is perhaps the most popular and famous location to go ice fishing in Maryland, developed rapidly in early January and “hard water” fishing was enjoyed by many. As January rolled on, warmer weather and rain caused deteriorating conditions and the lake currently has open water along the edges and “rotten ice” on the main lake and coves. Time and weather will tell whether ice conditions improve in February and anglers are able to safely get out on the ice once again. 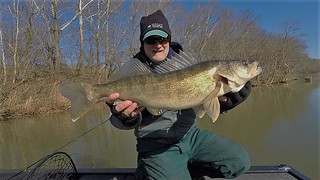 John Mullican holds up a beautiful walleye for the camera before slipping it back into the river. Photo courtesy of John Mullican

But as weather conditions have opened up waters around the state, fish that enjoy cold water — such as walleye and smallmouth bass — are active in the upper Potomac River. Be advised that flows in the upper Potomac River are brisk this time of the year and rain events in the upper watershed can cause conditions to become dangerous very quickly. Smallmouth bass tend to hunker down in what many call “winter holes” where they can get some relief from stiff currents; walleye will also be found in these same areas. Small to medium-sized soft plastic jigs and swimbaits worked slowly close to the bottom can offer some trophy-sized smallmouth bass and walleyes. Through April 15 any walleye greater than 20 inches must be returned to the river, and the minimum size for possession is 15 inches. 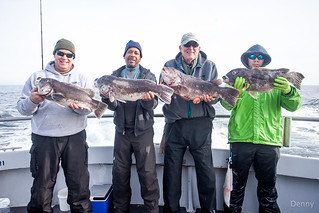 This group braved some chilly temperatures on a trip with an Ocean City party boat and were more than happy to show off part of their catch. Photo by Captain Monty Hawkins

In the coastal areas and Ocean City the few party and charter boats that are heading offshore were locked up in ice in the early part of January. Tautog season is open now with a four-fish per-day limit and a 16-inch minimum until May 15. The tautog are out there and some impressive catches are being made, but weather conditions rule as to when boats can go. Some large flounder have also been caught recently to help spice up any trip. Spiny dogfish have been reported to be pesky at some of the wreck and reef sites, causing boats to move to other promising locations. The water temperatures at the wreck sites is holding around 46 degrees this week. The sea bass season is closed until at least Feb. 28.

“To go fishing is the chance to wash one’s soul with pure air, with the rush of the brook, or with the shimmer of sun on blue water. It brings meekness and inspiration from decency of nature, charity toward tackle makers, patience toward fish, a mockery of profits and egos, a quieting of hate, a rejoicing that you do not have to decide a darned thing until next week. And it is discipline in the equality of men-for all men are equal before fish.” – Herbert Hoover, 31st President of the United States