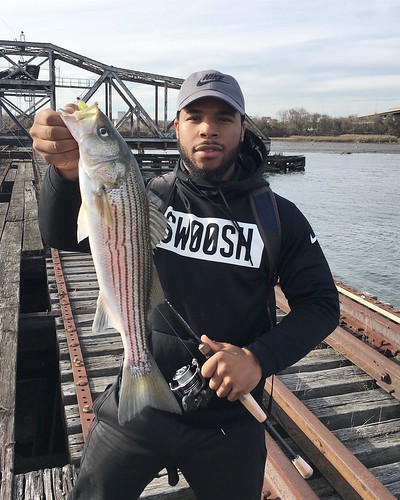 Karon Hickman holds up a nice striped bass he caught while casting in the Patapsco River. Photo courtesy of Karon Hickman

The upper bay region has been providing good fishing for a larger grade of striped bass, primarily by trolling along deep channel edges in the bay and lower sections of the region’s tidal rivers.

Heavy inline weights are being used to get a mix of swimshads, bucktails, red surge tubes and spoons down close to the bottom. Jigging has also been a good option when fish can be found suspended along channel edges. Anglers continue to encounter breaking fish, often smaller striped bass, but at times there are some real bruiser-sized fish. As water temperatures drop, the smaller striped bass (those under 20 inches in length) are feeding less.

Casting diving crankbaits that resemble shad in several of the tidal rivers has been a good tactic for striped bass. Often there is a high throwback ratio, but some nice larger fish are being caught. A mix of juvenile hickory shad and gizzard shad are moving out of the major tidal rivers and into the bay. The lower Susquehanna, Patapsco and Chester rivers have been good places to jig or cast crankbaits this week. 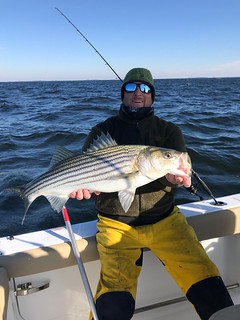 Fishing for white perch and channel catfish has been very good in the lower sections of the major tidal rivers, in deeper water. The white perch in particular are holding in deep water and can be caught on bottom rigs baited with bloodworms. The catfish can be caught on cut bait, nightcrawlers or chicken livers. Yellow perch are also starting to be caught in the tidal rivers.

There continues to be a lot of action around the deeper parts of the Bay Bridge piers and rock piles this week. Deep jigging has been a great way to catch large white perch and striped bass. A fair percentage of the striped bass are measuring under 20 inches in length but some larger fish are also being caught.

In the middle bay region most of the striped bass action for larger fish is taking place along the western edge of the shipping channel, from Chesapeake Beach down past Parkers Creek. Trolling with inline weights is the name of the game here to get lures down close to the bottom. Umbrella rigs have been popular with swimshads as a trailer but a mix of bucktails, spoons, red surge tubes and diving crankbaits have also been good items to have in a trolling spread.

Anglers are finding breaking fish and slicks, along with suspended fish on depth finders, and these all call for some light-tackle jigging with soft plastic jigs or metal. Some of the larger striped bass are being caught on soft plastic jigs in the 6-inch to 8-inch range. White perch tend to be holding in very deep water now, often about 40 feet deep, above oyster bottom. It will take a bottom rig to get down to them, and pieces of bloodworm are a good way to catch them. A sinker with two dropper flies that can be tipped with a piece of bloodworm will also work well. All of the tidal rivers in the middle bay region have populations of white perch holding in tight schools, and this tends to be a good time of the year to stock up on some nice ones for the freezer.

There is good fishing for some impressively large striped bass in the lower bay region this week. The lower Potomac River along the steep channel edge from Piney Point down to Point Lookout has been a great place to troll or jig. A very nice grade of striped bass can be found suspended along the 40-foot edge there. Out in the bay there has been some action on the 35-foot edge in front of Cove Point and along the eastern edge of the shipping channel from Buoy 76 south to Buoy 72A. The larger striped bass tend to be holding close to the bottom, so you’ll need inline weights when trolling and fair-sized soft plastic jigs in the 8-inch range when fishing in this deep water.

Fishing for white perch has been very good in the lower regions of the Patuxent, Nanticoke and Wicomico rivers. Most are holding in about 40 feet of water, most often over solid oyster bottom. Pieces of bloodworm on a bottom rig or dropper flies on a fair-sized sinker will get down to where the white perch are holding, close to the bottom.

Mild November conditions this upcoming week should keep surface water temperatures relatively stable, resulting in bay gamefish continuing their movement out of river mouths and down the ​bay. The Maryland portion of the ​bay has a well-mixed water column with suitable oxygen conditions from surface to bottom. However, there are slightly warmer bottom water temperatures, so anglers may want to scan these deeper channel areas for fish. As reported from National Oceanic and Atmospheric Administration buoys, main ​bay surface water temperatures are hovering in the low 50s and upper 40s, with the coolest waters found in the upper bay and upper Potomac River near the Woodrow Wilson ​Bridge.

The warmer waters are found from the Gooses Reef south to the mouth of the Potomac River. Expect some reduced water clarity from an ongoing algal bloom hugging the western shore from the Patapsco River down to Cove Point, and on the Potomac from Cobb Island down to Piney Point.  Expect normal flows for streams and rivers entering Maryland’s portion of the ​bay. Tidal currents conditions will be excellent all week due to the full moon Dec. 4. Windy conditions Friday could impact timing and magnitude of tidal currents. 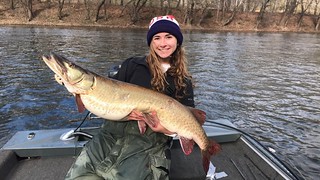 Muskellunge often are called the fish of a thousand casts. Mackenzie Peperack patiently fished a whole day until catching this 46-inch long muskellunge, which she then slipped back into the upper Potomac River. Photo by Steve Peperak

Walleye fishing at Deep Creek Lake has been excellent this week. Most anglers are casting diving jerkbaits for the walleye, or drifting minnows along steep rocky shorelines. Large yellow perch and smallmouth bass can also be in the mix, especially when drifting minnows.

Trout fishing in many of the fly-fishing only and catch-and-release trout management waters offers some fun this time of the year. Water flows are usually good and floating leaves are not as much of a problem as they were a few weeks ago.

The upper Potomac River, although a bit low, has been fishing well for a mix of walleye and smallmouth bass. The colder water is much to the liking of the walleye but the smallmouth bass are not as aggressive. Working light jigs along the bottom in some of the deeper holes with submerged ledges is a good tactic and anglers will find that the pickups will be subtle, more like a light tap when a smallmouth bass picks up a jig.

Farther down the Potomac River, in the tidal areas south of the District of Columbia line, fishing for largemouth bass has been good along channel edge drop-offs and deeper structure. The bass are holding close to the bottom, waiting for crayfish or small baitfish that are looking for deeper winter cover. Hair jigs, small crankbaits and soft plastic craws are good choices to fish right on the bottom, expect subtle light pickups. Crappie fishing has been excellent around bridge piers, marina docks and fallen treetops. It is hard to beat a minnow under a bobber, but crappie jigs under a bobber can work well also. Fishing for blue catfish continues to be excellent in the deeper holes along the channels.

The reservoirs that serve Baltimore City are offering great opportunities this week for a mix of largemouth bass, landlocked striped bass, chain pickerel, crappie, landlocked white perch and channel catfish. Now that grass beds have diminished fishing can be easier.

The waters around Ocean City continue to get chillier, approaching 50 degrees near the inlet. That cooler water has brought in some nice large tautog to the area, and many anglers got their licks in on some beautiful fish before the season closed November 26. It will reopen on New Year’s Day. Striped bass are being caught in and around the inlet and in the back bay areas all the way to the Route 90 bridge. Most are being caught on jigs and swimbaits in deeper waters and on topwater lures in the shallower back bay waters. Most are short of the 28 inch minimum but offer a lot of fun fishing.

The fall migration of large striped bass from the New England waters is well underway and most seem to be far offshore, beyond Maryland’s three-mile legal boundary. There are always some that are bound to hug the coast and surfcasters will be soaking large baits for the next couple of weeks in hopes of tangling with one. There have been boats clearing the inlet and trolling a mix of parachutes and large crankbaits near the various shoal areas up to the Delaware state line, without much to show for their efforts so far — but that could change any day.

The boats headed out to the nearshore and offshore wreck and reef sites will be focusing their fishing efforts on sea bass now, since the tautog season is closed. Limit catches are being reported and some of the sea bass are reported to be big “hump heads.” Additionally, there is a mix of large flounder, along with some triggerfish and sheepshead being reported.

“I never lost a little fish – yes, I am free to say. It always was the biggest fish I caught, that got away.” – Eugene Field