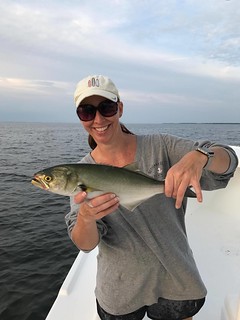 Nora Long with a bluefish she caught in the Bay. Photo by Travis Long

This is Erik Zlokovitz filling in once again for Keith Lockwood on the weekly fishing report.

The big weather story this week is Hurricane Irma, which is making landfall in the Lesser Antilles region of the Caribbean islands. The storm made landfall as a Category 5 on the Saffir–Simpson Hurricane Scale, making it the most powerful hurricane on record to ever form in the open Atlantic Ocean. With Florida in Irma’s path, some residents will inevitably see a lot of wind and rain. Irma or her remnants won’t affect Maryland if at all until next week, setting up a fair to good forecast for the weekend, with light northerly winds on the water. Those cool winds are ushering in a taste of fall, lowering water temperatures across the region.

You should get out soon if you are interested in targeting our warm water visitors such as Spanish mackerel, red drum and bluefish. 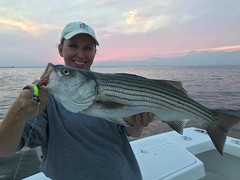 Nora Long, with a nice striped bass caught on a jig. Photo by Travis Long

In the upper bay, look for a topwater bite to develop for striped bass as the waters cool. Some of the productive topwater areas in the northern bay and Susquehanna River are between Port Deposit and Deer Creek and the channel edges in the Susquehanna Flats. Some of the good locations further south in the bay are the mouth of the Patapsco River, Francis Scott Key Bridge and North Point State Park. Some anglers also cast plugs and topwater baits to striped bass in the Inner Harbor and Gibson Island near the mouth of the Magothy River. Early mornings, evenings and overcast days are best for topwater action. Smack-It plugs are very popular but older lures such as the traditional blue/white Atom popper will also catch fish.

Trolling the upper and mid-bay with small bucktails, small spoons and surgical hoses in blue, purple, or red has produced some keeper striped bass. Chumming and live-lining is still working around the Key Bridge pilings, Podickory Point, Love Point and the Chesapeake Bay Bridge pilings. Jigging has been working well around the Bay Bridge, Love Point, and further south around the mouth of the Eastern Bay and off Chesapeake Beach. Travis Long sent in a picture of his wife, Nora, with a nice striped bass caught on a jig.

The cobia continue to be found from the Middle Grounds north to the Target Ship and chumming and baiting with live eels and chunk baits has been the most popular way to fish for cobia. Some anglers are also catch a few cobia while sight fishing with large bucktails and plastics. Red drum are caught while trolling large spoons and also when casting to breaking fish with spoons and lead head jigs dressed with bucktail, plastic trailers and skirts. 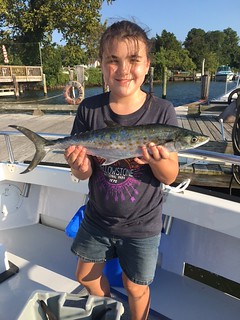 Trolling for a mix of bluefish and Spanish mackerel continue to be productive in the lower bay. Trolling with small spoons (size 0 or 1, Huntington Drones, Tony’s, and other small spoons of similar design) behind inline weights or planers has been the best way to get down to the fish. If the fish are not breaking, then look for bait balls or suspended fish on your depth finder.

Bottom fishing continues to be good on both sides of the lower bay for a mix of species. Bloodworms have been the bait of choice although some report good success with artificial bait called Fishbites. White perch are being caught on peeler crab and shrimp along with croakers, kingfish and a few blowfish.

Before we get into the crabbing, freshwater and ocean sections, here is the weekly bay forecast summary from the team at Click Before You Cast.

Current main bay temperatures are averaging between 73 and 76 degrees and will continue to cool with several more days of low to mid 70-degree air temperatures and a chance of rain early next week. These conditions will continue to result in cooler, well oxygenated waters for gamefish to search for food. While lots of Maryland waters will have adequate oxygen from surface to bottom, start your search just above the “Do not fish below this depth.” In the upper bay near Swan Point avoid fishing depths below 16 feet. At the Bay Bridge, fish above 25 feet while from the mouth of the Choptank River south, there is plenty of oxygenated water down well below 30 feet. Expect reduced water clarity from higher than normal flows for streams entering the lower Potomac River and the eastern shore as a result of localized storms earlier in the week. Take advantage of the above average tidal currents from now until Monday as a result of the recent full moon Wednesday. 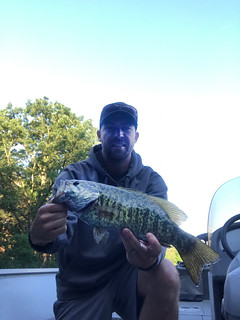 Recreational crabbers were finding that crabbing action had slowed down in the Severn and Magothy rivers during late August. We are hoping for better success by running trotlines further south in the West/Rhodes complex and the Severn this fall in 4-12 feet of water, but you have to put time and effort and work for the big male “jimmy” crabs.

Freshwater anglers will find less boat traffic on the lakes and an active topwater bite for largemouth bass in the mornings and evenings. Here is the Deep Creek Lake report from our Western region fisheries biologist Kenny Wampler:

“With summer vacation coming to an end, fisherman will now find themselves on the lake with just a handful of boats. The fishing at Deep Creek Lake is good and will be getting better within the next few weeks with cooling temperatures. In recent outings for bass I have had three techniques that have be my “go to.”  Topwater fish have been active early in the mornings and late in the day with poppers, buzzbaits, and walking baits all work depending on the water conditions. Once the topwater bite is over, I’ll either skip soft plastics under docks, or I’ll throw a swimbait on points. Both have worked well with the swimbait catching just about every species in the lake!”

“If you just want to go out with the kids and get a few fish for dinner or that Sunday afternoon Steelers game fish fry, some live bait tactics should come into play. Fishing the edges of weed beds with worms and minnows under slip bobbers should produce some fish. If that doesn’t work another one of my favorite techniques is simply drifting main lake shorelines with a jig tipped with either a worm or minnow. This is a good way to cover water and find where fish are holding. Once you find them, drop the anchor and put fish in the boat. Just be sure to refer to your “Maryland Recreational Fishing Guide” for size restrictions and creel limits!” 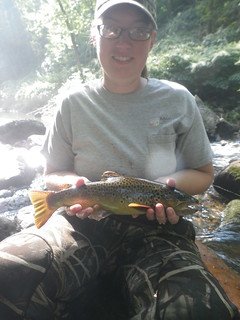 “Western Maryland trout fishing should continue to be good due to plenty of rain and rather cool temperatures throughout late summer. Terrestrial patterns such as hoppers and flying ant patterns will work well during this time of the year. We recently conducted the Savage River Trophy Trout Fishing Area annual trout monitoring surveys, and this river continues to support an amazing number of quality sized trout. The Fly Only section had an estimated 1,082 adult trout per mile, and the Artificial Lures and Flies section contains about 933 adult trout per mile. Wild brown trout comprised the majority of the trout population density, with a large portion of these fish in the 12 to 15 inch size class. Here is a picture of Melissa Nash with a nice Savage River brown trout.”

In the Ocean City area and along the Atlantic coast and back bays, we still have the usual assortment of late summer species. Large sheepshead have been biting at the inlet jetties on sand fleas, and some small bluefish and striped bass. Party boat captains have reported all summer that sea bass and flounder seem to bite on alternate days on the offshore artificial reefs and wrecks. On some days, the sea bass bite better, while on other days, the flounder bite better.

On the offshore scene, this writer has been receiving mainly slow reports on tuna and mixed reports on white and blue marlin. White marlin releases, a few blue marlin and some yellowfin tuna have been reported from the Poor Man’s Canyon, Baltimore Canyon and Wilmington Canyon. Dolphinfish (mahi-mahi) were providing action in these areas when tuna and marlin were not cooperating.

“There are always new places to go fishing. For any fisherman, there’s always a new place, always a new horizon.” – Jack Nicklaus ABOUT THE AUTHOR Filling in for Keith Lockwood, Erik Zlokovitz is the recreational fisheries outreach and access coordinator for Maryland Department of Natural Resources, Fishing and Boating Services. He is an avid angler and historian of the mid-Atlantic and Chesapeake fisheries and grew up fishing and working on party boats in Long Island Sound, Montauk, the South Shore of Long Island and the Jersey shore starting in the late 1970s. He has been a resident of Maryland since 1996, and fishes all over Maryland, but mostly in the mid-bay area. He has worked with the department since 1998, including a short stint at National Oceanic and Atmospheric Administration-Fisheries headquarters in Silver Spring, 2007-2009. Erik has a bachelor’s degree in Marine Science and Biology from Southampton College in Long Island, New York, and a Master’s Degree in Fisheries Science from University of Maryland-College Park. He did his master’s research on striped bass while based at Chesapeake Biological Lab in Solomons.