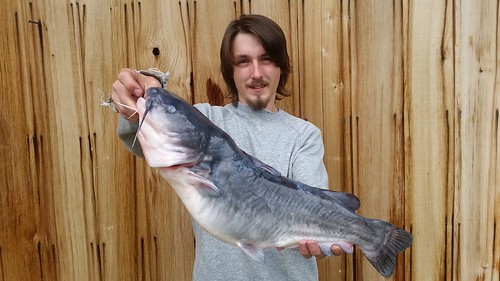 The Maryland Department of Natural Resources confirmed a St. Mary’s County man has set a new state fishing record for white catfish. The fish was recognized as a game fish a few years ago, but until now nobody had broken the seven-pound minimum weight to be eligible for state records.

Jacob Vosburgh, 20, of Lexington Park, caught the fish recorded at 8.27 pounds June 1 in the lower Potomac River. The white catfish was 23 inches in length.

Using bloodworms as bait and a Carolina sinking rig–designed for finding fish on the river bottom–Vosburgh caught several small fish that morning but decided to be a little more patient and see what else was biting. Vosburgh, who was fishing with a friend, would see his patience pay off when he made his record catch.

“Even before we took it out of the water, just judging by the size of its head we knew it was state record,” said Vosburgh.

Veronica Beck of Crabknockers, a seafood market in Leonardtown, certified the fish’s weight.

Anglers who think they have a potential record catch should download and fill out the state record application and call 443-569-1381 or 410-260-8325. The department suggests the fish be immersed in ice water to preserve its weight until it can be checked, confirmed and certified.