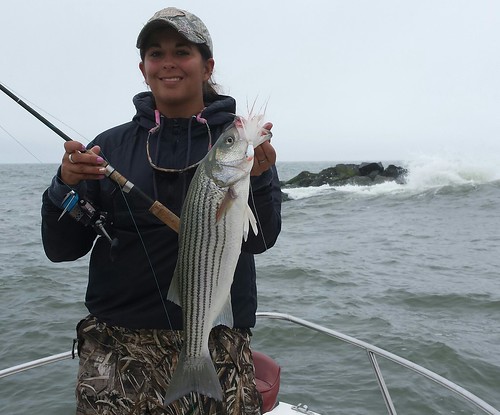 Angelina Watts got to do some fishing with her dad near the inlet.

Most enjoyed a nice break in the weather over the Memorial Day Weekend although there were scattered showers at times. The forecast for the rest of the week promises sunny and warmer weather. Those that fish the Chesapeake for striped bass are looking forward to all waters of the bay being open to striped bass fishing as of June 1. Cooler water temperatures are making for excellent freshwater fishing, so whatever you choose, enjoy the outdoors this week.

Water releases at the Conowingo Dam have been highly variable this week with large releases during the day and barely any during the night. This certainly makes for some crazy fishing in the river if one is trying to cash in on the large numbers of white perch present. Out on the bay, near the channels below the flats, there continues to be good striped bass fishing in the mornings and evening. Topwater poppers have been a favorite along the shallower parts of the channel edges. On June 1, all parts of the bay will be open to striped bass fishing so anglers will be able to fish the lower Susquehanna if they wish.

The striped bass action tends to be a little slow as one ventures south in the upper bay region. There has been some action for those drifting live eels around the deeper channel spots around Pooles Island and there has been some chumming action at Swan Point. Those trolling are finding a few fish along the 30′ channel contours by trolling umbrella rigs with bucktail or swim shad trailers. Love Point is always a place to check out and there is some trolling and chumming action there as well as Podickory Point. Striped bass are being found at the Sewer Pipe and Bay Bridge Piers by slow trolling close to the bottom, by jigging and a few boats are chumming, it tends to be a slow pick but can be worth the effort.

The middle bay region tends to offer some of the better striped bass fishing opportunities this week. There are some good concentrations of fish spread out along both sides of the bay, mostly along the edges of the shipping channel. The action has been good on the western side of the bay from Thomas Point south to below the power plant. The fish tend to be suspended along the 35′ edge of the channel and at times are pushing bait in the form of bay anchovies to the surface and creating some fun topwater action. There are quite a few sub-legal sized striped bass involved when breaking fish are encountered but there are some nice fish in the 22″ to 28″ size range mixed in. Light tackle jigging has been popular but others are having fun with topwater lures.

Trolling is certainly an option and most are pulling a mixed spread of 3 to 4 ounce bucktails dressed with twister tails, spoons, red surge tube lures and also umbrella rigs, all with inline weights to get them down. Those looking to sit still and relax a little have been chumming at the outside 30′ edge of Hackett’s, the Hill and anywhere fish can be found suspended along the channel edges. Water temperatures in the middle bay region are about 65° this week and salinities are a bit lower than normal. 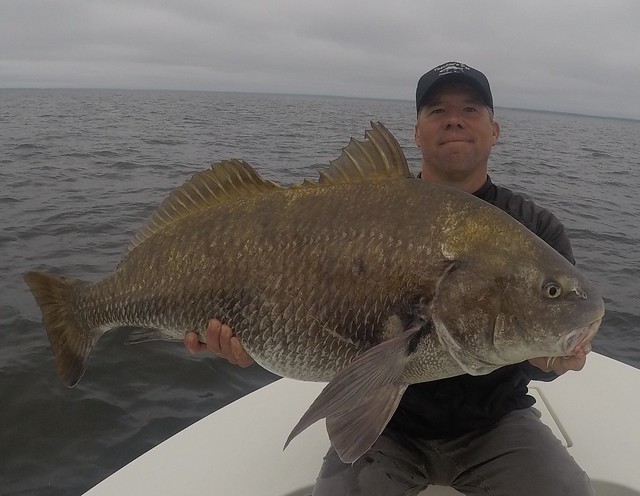 Travis Long holds up a nice one for the camera caught this past weekend.

Black drum showed up on time at Stone Rock and the Sharp’s Island Flats this week and more than a few boats got into the action. Standard fare for this show is a good depth finder, a sturdy conventional rod set up with a large circle hook with a whole or half of a soft crab held to the hook with a rubber band. Once a fish is spotted under the boat, the angler does their best to drop the bait close by and hope a cow-nosed ray doesn’t pick up the bait.

The shallow water fishery for striped bass in the middle bay region has been offering some exciting fishing this week in the early morning and evening hours. There is a mix of sub-legal and striped bass in the 22′ to 26″ size range moving about in shallower areas near prominent points, submerged breakwaters and shoreline structure. Topwater lures such as poppers are the best and most fun way to fish for them. June 1, all areas of the tidal rivers and creeks will be open to striped bass fishing. Eastern Bay will be one of the areas being looked forward to since there has been a nice concentration of striped bass in the area for the best part of the month of May.

In the lower bay region most of the striped bass action tends to be in the Cedar Point to Cove Point area. Everyone is anticipating being able to fish in the lower Patuxent starting tomorrow June 1. Trolling along the 35′ channel edge with an array of bucktails, red surge tube lures and spoons have been popular; all are being pulled behind inline weights. There is also some good trolling action in the lower Potomac River near Piney Point and St. George Island. All of these channel edges also hold opportunities for light tackle jigging when suspended fish can be spotted on depth finders. Others are also entertaining the idea of chumming and have been setting up near Buoys 70, 72A and the Middle Grounds.

On the eastern side of the bay speckled trout are being caught despite the chilly weather and when the sun breaks out and warmer temperatures prevail, this fishery should really kick in gear. Drifting peeler crab or soft crab baits on a falling tide near the mouths of tidal creeks is the best place to be; advoiding cow-nosed rays is part of the deal. Casting white Gulp mullet baits is a good way to cover water and have fewer hook ups with rays. There are striped bass in the area as well, many are sub-legal but they offer plenty of action, especially on topwater lures.

A few croakers are showing up here and there in the Tangier Sound and Point Lookout areas as well as the mouth of the Wicomico River in the lower Potomac. Most are catching a lot of medium-sized blue catfish in the Bushwood area of the lower Potomac while bottom fishing. 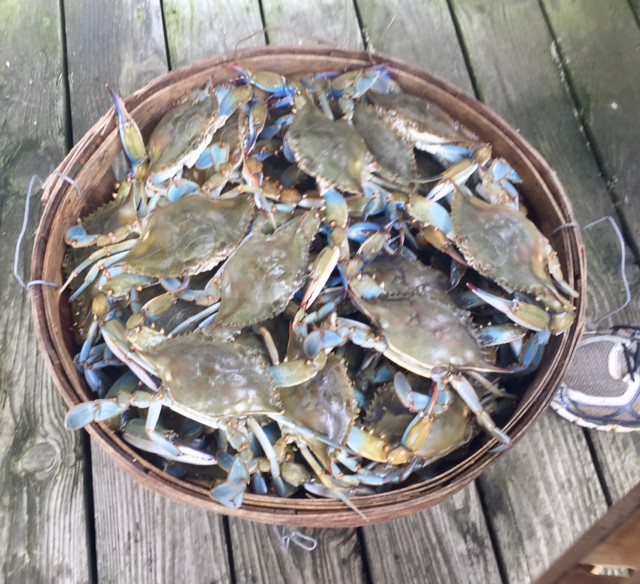 The Bishops “brought home the bacon” in a sense with this nice bushel of crabs destined for a Memorial Day crab feast.

Fishing for white perch has been good in all three regions of the bays tidal rivers and creeks. Fishing with grass shrimp or bloodworm baits near docks and piers is a fun way to catch up a mess of filleting size perch. Casting small spinnerbait jigs or spinners along shoreline structure in the morning and evening hours is also a productive and fun way to catch them.

Recreational crabbing continues to be good in most of the middle and lower bay tidal rivers and creeks. The catches tend to be a little better this week on the Eastern Shore and with water temperatures relatively cool, some of the best catches are coming from shallow water.

John Mullican was kind enough to send us an update report from the upper Potomac River. The Potomac River is flowing above normal due to the recent rains. Although predicted to fall towards the weekend, levels will still be fairly high and boaters should be very cautious. Smallmouth bass were actively spawning prior to the recent high water event and those flows could have negatively affected this year’s year class. Bass fishing, however, has been good and bass have been taking a variety of offerings. Jigs/tubes have been the most reliable, but spinnerbaits, crankbaits, jerkbait and topwater baits have worked as well. 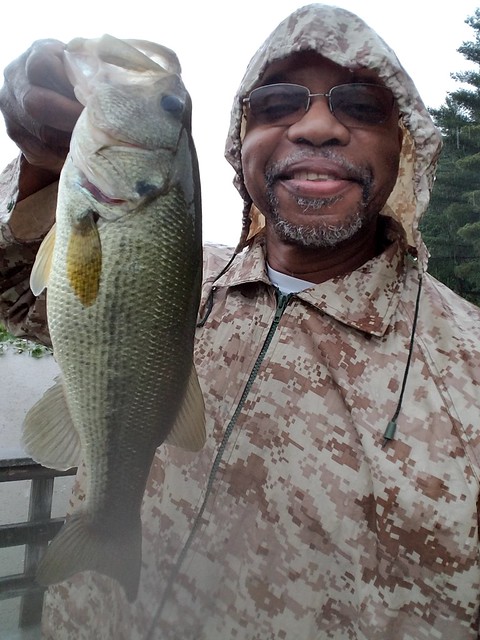 No one likes fishing in the rain, but Russell Anderson stuck it out on Sunday at Lake Allen and had this nice largemouth to show for it.

Largemouth bass are offering excellent fishing opportunities in small ponds, larger impoundments and tidal rivers throughout the state this week. The bass are in a post-spawn mode of activity and with water temperatures relatively cool, the bass are in a very active feeding mood. The shallow water morning bite has been lasting longer into mid-morning and starting earlier in the evenings due to overcast weather and cool water temperatures. Targeting shallow grass is a number one tactic during these times with topwater baits. Northern snakeheads will be part of the event when fishing topwater lures in many of the state’s tidal rivers. Stick worms and soft plastics are good baits to use if you want to get down through the grass or along the edges, both should be whacky rigged.

There are plenty of other freshwater fishing opportunities this week for various species of sunfish, crappie and chain pickerel. Trout fishing has been very good in the western region and recent stockings have bolstered trout fishing opportunities there. For those wishing to do some bottom fishing, channel catfish can be found in most tidal rivers and blue catfish in the tidal Potomac and Nanticoke Rivers.

Flounder are being caught in the channels near the inlet and even a few speckled trout. The smaller bluefish are expected to be around this week and a couple of black drum have been reported in the back bay channels.

The winds dropped off enough over the weekend that boats were able to get out to some of the wreck and reef sites closer to shore and experienced very good sea bass fishing with limits being common. Also over the weekend boats made it out to the canyons and came back with a mix of bigeye and yellowfin tuna, dolphin and those that chummed caught a few makos and had quite a few blue sharks fussing with baits.

“Most fishermen swiftly learn that it’s a pretty good rule never to show a favorite spot to any fisherman you wouldn’t trust with your wife.” -John Voelker