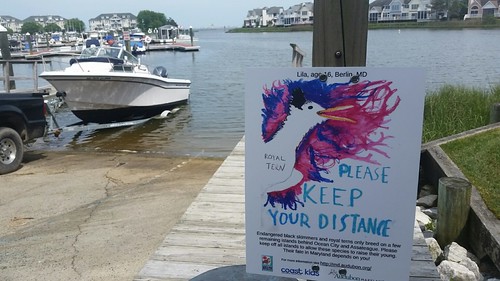 The Coastal Bays around Ocean City, Maryland, that are so popular with boaters and vacationers in the summer months, are also home to another kind of summer visitor – endangered species of beach-nesting birds like the Black Skimmer, Royal Tern and Common Tern. That’s why local conservation organizations and the state of Maryland are asking paddlers and boaters to give the birds a break from the bustle of human activity and stay off the islands where the birds nest.

Islands that support nesting populations of colonial waterbirds have been posted with closure signs for the nesting period, April 1 to September 15, and signs featuring artwork and messages created by local school children adorn Worcester County boat ramps, marinas, and tackle shops. More than 100 of the signs were posted in 2016, and now again this year, as part of a coordinated campaign to educate visitors about the importance of undisturbed islands to Maryland’s last remaining breeding colonies of endangered waterbirds.

It is illegal to land a boat or set foot on an island that is posted by the State of Maryland to protect nesting birds. Citizens can help with enforcement efforts by calling 410-260-8888 if they see trespassers on the islands. The Maryland Natural Resources Police patrol the Coastal Bays year-round.

Beach-nesting colonial waterbirds are far more sensitive to disturbance than most birds because they lay their eggs directly on bare ground where they are highly vulnerable to predators like foxes, gulls and crows, and eggs can bake in the sun if the parent birds are kept off the nest for more than a few minutes.

Black skimmers are odd-looking but graceful birds, named for their unique feeding habit of skimming along the water surface with their lower bill, which is longer than the upper one, and snatching up any fish that it touches. Royal Terns and Common Terns dive at an angle into the water to catch their prey. To vacationers, these birds’ buoyant flight, loud calls, and dramatic fishing behavior make them the avian icons of Ocean City summers.

Since 1992, the Maryland Black Skimmer population has declined from 278 pairs to just six pairs confined to a tiny island fragment where their nests were at-risk of being washed away by boat wakes on every high tide. Similarly, Common Terns have declined 86% since the early 1990s and Royal Terns by 60%. All three of these species are now listed as endangered in Maryland. “The Maryland Coastal Bays are the only place in the state where these birds breed” said David Curson, Audubon Maryland-DC’s Director of Bird Conservation. “This is one reason why Audubon has identified the Coastal Bays as an Important Bird Area, an essential site for bird species that are vulnerable.”

Their recent decline is mostly due to the loss and deterioration of islands from erosion and sea level rise. Development and recreational disturbance are also factors that have taken away valuable nesting areas for these bird species, and the islands that dot the coastal bays are their last remaining refuge.

In the past 25 years, more than 300 acres of islands were eroded away or built on in the bays behind Ocean City and Assateague. The original 29 breeding islands have been reduced to four. Other island specialists have also suffered the beach nesting loss, including least terns, American oystercatchers, terrapins, and horseshoe crabs.

In 2014-2015, the U.S. Army Corps of Engineers created four new islands to help the struggling birds, using material dredged from Ocean City’s boating channels. Using dredged sand to rebuild islands in this way actually saves taxpayers money because it is cheaper than disposing of the sand on land.

In 2015, before the islands were posted, disturbance by human visitors became a problem at “Tern Island” in Isle of Wight Bay, the largest of these new islands, preventing breeding activity by birds. But after closure signs were erected the next year, the number of human intruders greatly decreased. “Respecting island closures on small sand islands in the Coastal Bays is the most significant individual action that recreational boaters can take to help conserve Maryland remaining breeding Black Skimmers, Common Terns and Royal Terns,” said Dave Brinker, Regional Ecologist for the Maryland Department of Natural Resources.

The outreach campaign has been enthusiastically supported by Ocean City businesses and local government, who understand that charismatic birds and other wildlife boost the local tourist economy. Several local restaurants are displaying signs showing the children’s artwork, and Ocean City’s Public Works Department has assisted with erecting the signs at public places across the town. In Maryland, 1 million people spend $45 million a year on wildlife watching, and many come to Ocean City specifically to enjoy seabirds that they cannot see elsewhere in the state. “It is very gratifying to see folks supporting the restrictions on these important bird islands,”said Roman Jesien, Science Coordinator for the Maryland Coastal Bays Program.