As most know (or better know!) this coming Sunday is Mother’s Day. For many of us who loved to fish in our youth, it was our moms who fussed over us about dressing properly, being careful and being home on time. They worried then and they worry now, but they let their little outdoorsman be free to taste the adventures of the world. We don’t see too many kids peddling down the road with fishing rods these days, perhaps due to busier traffic conditions or moms keeping an even closer eye on youngsters in these different times. These days it is often moms who succumb to the pleas of, “Please take me fishing!” To all the moms out there that fish, we hope you catch the biggest fish of the day.

The flood gates at the Conowingo Dam are open, and cold and stained water is pouring through into the lower Susquehanna River. This past weekend’s extreme high tides also added floating wood debris to the mess. The striped bass catch-and-release season is closed in the area, so the most common fish being targeted now are white perch and catfish. The American shad and hickory shad are still in the river and providing some catch-and-release fun. There are a lot of white perch in the river at this time and should be for another week or so, making for a great time to catch some filleting-size perch.

Ted Kolobow has plenty to smile about with this beautiful fish he caught along the channel edge off Taylor’s Island.

In the upper bay region that is open during the trophy season below the Brewerton Channel, the most productive trolling action tends to be around the Triple Buoys and the Love Point Channel edge. Large parachutes in chartreuse with white sassy shads have been one of the most popular options in about 40 feet of water. The weekend before the end of the Susquehanna Flats catch-and-release season there were raving reports of plenty of striped bass in the 26-inch to 30-inch size range in the Susquehanna Flats region. Hopefully, those fish will be available in the region south of the Tolchester/Hart-Miller Island boundary line after May 16.

Chumming and chunking for trophy sized striped bass has been an alternative for those tired of trolling back and forth across the shipping channel. The steep channel edge at Podickory Point has been a favorite spot to anchor up and just take it easy and relax while a few baits drift out over the edge of the channel. The Bay Bridge piers are always worth checking; jigging can offer some fun action, as can chunking.

The middle bay region has been offering some slow pick trolling action at some of the traditional steep channel edges. The channel edges off Kent Island, Bloody Point Light, the False Channel, CP Buoy and the edge off Taylor’s Island. Those who are constantly changing up or making extreme efforts are the ones routinely pulling fish on board. I personally have not seen one go by yet, but I hear of some charter boats pulling as many as 40 lines in an extreme effort to get their clients on fish.

The best trolling action reported in the lower bay region for striped bass this week has been along the channel edges at Cove Point, but it is far from the action expected for the beginning of May. Catches continue to be sparse and somewhat disappointing for many. The east side of the shipping channel near the HS Buoy and Buoy 72 have been giving up some fish, as has the lower Potomac near St. George’s Island and Piney Point. Those fishing up near the Wilson Bridge for other species report there are still striped bass splashing about up there. These most likely are smaller fish, and this may be their first time on the spawning grounds. They were often called “May Rock” by old timers. Similar action has been seen this week on the Choptank and Nanticoke rivers.

White perch continue to offer good fishing in the tidal rivers and creeks in all regions of the bay. They can offer some fun ultra-light spin fishing in the mornings and evenings along shorelines with some kind of structure. Some of the more reliable spots are fallen tree tops, sunken logs, old piers, rock groins and prominent points with a good current flow. Small spinners and jigs are good choices for lures, and small chartreuse Clouser flies the ticket when fishing with a 4- or 5-weight fly rod. Few things can be as relaxing and fun as sitting on the end of a dock and fishing with grass shrimp, bloodworms or minnows. Channel catfish are active in most tidal rivers, and the tidal Potomac River from the Route 301 Bridge to the Wilson Bridge is full of blue catfish. 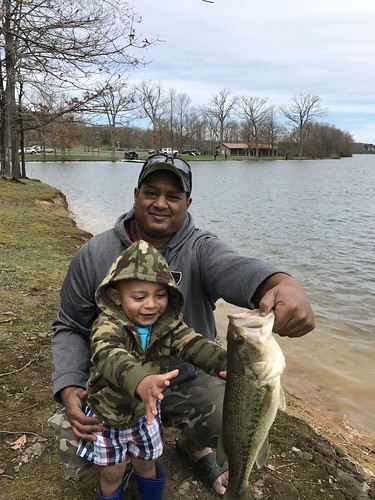 Calvin Riley and his dad, Dan, had a fun time at Broadford Lake, where Calvin got to reel in his very first largemouth bass.

Trout stocking in the put-and-take trout management waters in the eastern, central and southern regions will begin to slow down as water temperatures begin to rise. The waters of the western region are, of course, a lot cooler. Lower air temperatures and shaded watersheds will offer excellent trout fishing throughout the summer months.

The upper Potomac River is reported to be unsuitable for fishing this week and dangerous for any boating activities. The tidal area is reported to have a lot of floating debris as a result of last weekend’s extreme high tides, and the waters are stained. Despite these conditions, fishing for largemouth bass has been good. Some areas are seeing the last of the spawning bass, which are in a very active feeding mood. Targeting grass has been the number one tactic this week with whacky rigged stick worms in the grass or working poppers over the grass. This same tactic has also been working well on the tidal rivers of the middle and lower Eastern Shore near grass of spatterdock fields on an ebbing tide.

Crappie fishing in the tidal rivers and impoundments continues to be good with the crappie being found in shallow waters now. Small jigs or minnows under a slip bobber is a very popular way to catch them.

Whether you’re fishing a small local pond or one of the larger reservoirs to be found in Maryland, the month of May offers some of the finest freshwater fishing opportunities of the year.

The Ocean City area, like most of the state, has been subject to windy conditions that made it difficult or impossible to be out on the open waters of the ocean and back bays in a boat. The large spring bluefish are still being caught in the back bay areas, the inlet and nearshore waters. They have been offering a lot of fun to anglers that want to catch a big fish. They are being caught on Got-Cha lures or by drifting cut bait in the inlet and Route 50 Bridge area or by trolling in the channels. Surf casters are catching them on finger mullet and cut baits. Tautog are being caught in the inlet area on sand fleas and pieces of green crabs. Flounder are being found in the back bay channels; white Gulp baits or squid and minnow baits are working well.

As winds hopefully subside this week, boats will once again head out to the wreck and reef sites in search of tautog and others will head even further offshore to the canyons in search of yellowfin and bluefin tuna, along with dolphin and mako sharks.

“The best thing about hunting and fishing,” the old man said, “is that you don’t have to actually do it to enjoy it. You can go to bed every night thinking about how much fun you had twenty years ago, and it all comes back as clear as moonlight.” -Robert Ruark