After a few days of cool rainy weather, the sun is beginning to peek through, and warm or perhaps hot weather is predicted for the rest of the week. Spring is here and it is a wonderful time to be outdoors. There are a host of children’s fishing events scheduled for the coming weeks. Gather up some youngsters and take the time to attend one near you. 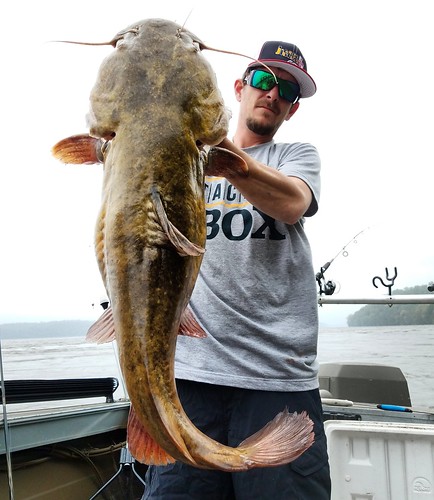 Water conditions have not been good this week in the lower Susquehanna area as cold stained water is coming down the river and through the Conowingo Dam. There are reports of high river levels below Harrisburg, so conditions are not expected to improve anytime soon.

Local rains will most likely chill waters in Octoraro and Deer creeks, so the hickory shad catch-and-release fishery may back off temporarily. However, air temperatures in the mid 80s later this week may warm the creeks enough for another spawning run this weekend. Previously there has been good fishing for hickory shad and American shad at the dam pool; hickory shad have been running up Octoraro and Deer Creek to spawn. Fishing for channel and flathead catfish at the dam pool and below has been very good recently. Predicted high flows may cause some difficulties for holding bottom.

The Susquehanna Flats striped bass catch and release season has certainly had its ups and downs due to water conditions being dominated by flows from the Conowingo Dam. The lure of the fishery has been waning since the trophy season opened; the Susquehanna catch-and-release fishery will end next Wednesday, May 3. Those using cut bait, such as menhaden or gizzard shad, have had a better success rate in the stained water conditions over those casting jigs, crankbaits and jerkbaits.

The upper bay region has been providing some trophy striped bass action in the areas around the Triple Buoys, the Love Point channel edges and Podickory Point. Most are reporting that the major concentrations of jellyfish are now below the Bay Bridge, but they are reporting loose sea lettuce fouling lures in some areas. 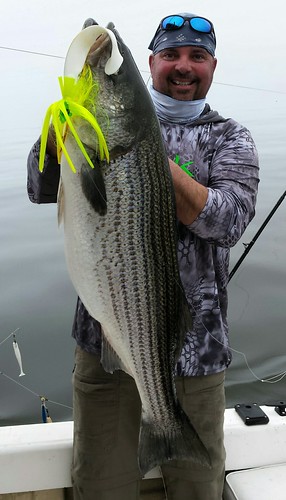 Rich Watts caught this beautiful 46-inch striped bass trolling near the channel edge at the Triple Buoys. That is 12″ of sassy shad hanging off of that parachute.

Anyone fishing near the Bay Bridge this Saturday, April 29 will see a progression of paddle boards and kayaks racing across the bay between the two spans between 8:30 a.m. – 11:30 a.m. Boat traffic will be restricted and enforced a quarter mile on each side to keep planer boards from sweeping through the paddle board fleet.

The Maryland Artificial Reef Initiative is deploying concrete material today at the charted and permitted Love Point fish reef (also known as “Fish Havens” on the NOAA nautical charts). This reef is located approximately 1.5 miles north of Love Point (northern tip of Kent Island), with a water depth of 26-30 feet. McLean Contracting Company from Glen Burnie/Baltimore is providing the material and deploying with their crane barge rig.

In the middle bay region, fishing success for trophy sized striped bass is gaining momentum as more post-spawn fish exit the spawning rivers and ply the shipping channel edges. I had the opportunity earlier this week to see some beautiful fish come into the docks at Oxford, including one 50-inch specimen. Traditional steep channel edges have been where the action is, and a mix of chartreuse or white parachutes and bucktails dressed with large sassy shads have been the winning ticket. Most are trolling tandem rigged baits, but an umbrella rig here and there in a trolling spread is not something to be overlooked. Large spoons are another good option but can cause a frightful twisted mess if they get tangled up with another line.

Water temperatures in the spawning rivers are in the mid 60s. Nearly all of the spawning is over on the Eastern Shore. Water temperatures out in the bay are holding around 54°F, and we can expect those temperatures to climb a bit with predicted hot weather later on this week. River herring are also leaving the shore’s tidal rivers and out into the bay headed south. They will become quick lunch if encountered by any hungry post-spawn striped bass.

Lower bay trophy striped bass fishing is moving along at a steady pace and improving with time. As we approach the first week of May, we should expect the fishing to really take off. Large striped bass are moving down the bay and also out of the Patuxent River. Shipping channel edges off Cedar Point, Cove Point and the HS Buoy will be popular places to troll. The Potomac River spawn has lagged a little behind schedule, possibly due to cooler water temperatures from upper watershed runoff. The predicted warm weather may speed things along; eventually those fish will be available in the lower Potomac. The places to be are the steep channel edges in the lower river off St. Georges Island and Piney Point, as well as the mouth of the river and Smith Point. 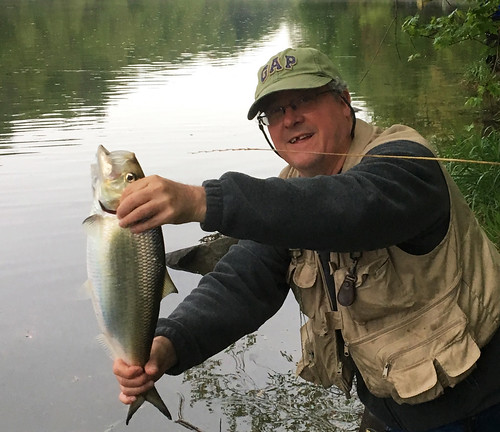 Richard Gunion shows off a nice Potomac River American shad before slipping it back into the river.

White perch are now being found in their typical summer season estuarine haunts. They can be caught near bottom structure on simple bottom rigs baited with bloodworms or grass shrimp. Casting spinners near shoreline structures in the evenings is a great way to catch them on ultra-light tackle.

Crappie fishing continues to be very good as they hold to deep structure. Those who are targeting them are enjoying some big catches in many impoundments throughout the state. Many of the tidal rivers hold good populations of crappie, with the tidal Potomac near the Wilson Bridge and Fort Washington area being one of the top locations. Often boats can be seen with spider rigged boats slowly working structure in the spoils area or marina docks and piers. Small minnows under a slip bobber or small soft plastic crappie jigs do the trick.

Largemouth bass in the tidal Potomac are almost finished spawning at this time. If they are off the nests, they can be found near creek mouths and milfoil grass. Stick worms with no weight have been a favorite to work the grass.

Largemouth bass in other regions of the state are in various stages of spawning. As one could imagine in the western region where water temperatures are colder, they are in the beginning stages, while those in the central, southern and eastern regions are actively spawning. Most shallow water baits work well this time of the year.

The water level at Triadelphia Reservoir is reported to be down this week by about 15 feet as a 2-year long project begins on the Brighton Dam. The work entails replacing intake screens and sluice gates on the dam and the concrete spillway surface. 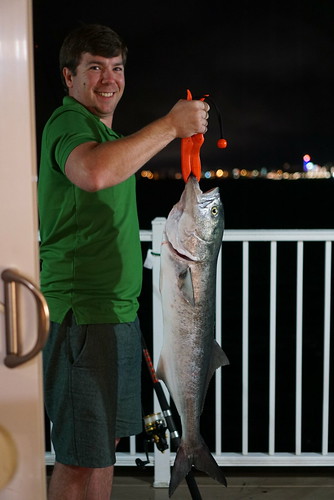 Bryan Rosensteel got a real surprise when he caught this big bluefish off the balcony of the waterfront condo he was renting.

Fishing at Deep Creek Lake has an extra bonus this week now that walleye season is open. Reports are that the fishing for a mix of smallmouth bass, walleye and large yellow perch has been good. Drifting along deep grass edges with minnows under a slip bobber is a relaxing way to fish for them this time of the year. Casting jerkbaits and crankbaits toward dark along steep bank edges is also another good tactic to target walleye.

Trout fishing continues to be very popular this week as stocking crews continue to place trout in the many trout management waters. Daily locations and quantities are posted online.

The fishing at Ocean City has been very exciting for those at the inlet, surf and just off the beaches as a horde of northerly migrating racer bluefish have descended upon the region. They are being caught in the surf on bottom rigs baited with finger mullet or menhaden baits. The term “racer” refers to migrating bluefish that are very skinny, which is typical in the spring. Surf anglers are also catching short striped bass, some medium sized black drum. For those fishing with squid or clams, there are some blowfish in the area to be caught.

At the inlet and Route 50 Bridge it has been all about the large bluefish for the past week, caught on cut menhaden or by casting lures. Tautog are being caught on sand fleas and pieces of green crab. A few flounder are being caught, and there continues to be short striped bass in the back bay areas that are providing some catch-and-release fun. Offshore the boats heading to the wreck and reef sites are reporting good catches of tautog.

“Three-fourths of the Earth’s surface is water. It is quite clear that the good Lord intended us to spend triple the amount of time fishing as taking care of the lawn.” -Chuck Clark

ABOUT THE AUTHOR Keith Lockwood has been writing the Fishing Report since 2003 and has had a long career as a fisheries research biologist since 1973. Over the course of his career he has studied estuarine fishery populations, ocean species, and over a decade long study of bioaccumulation of chemicals in aquatic species in New Jersey. Upon moving to Oxford on the eastern shore of Maryland; research endeavors focused on a variety of catch and release studies as well as other fisheries related research at the Cooperative Oxford Laboratory. Education and outreach to the fishing public has always been an important component to the mission of these studies. Keith is an avid outdoorsman enjoying hunting, fishing, bird dogs, family and life on the eastern shore of Maryland.