April 19, 2017
Another Maryland spring time opening day has arrived and passed, and the fishing will only get better as the season progresses. The opening day of the spring trophy striped bass season was slow because most of the post-spawn fish have yet to exit the spawning rivers. The Maryland landscape is ablaze with flowering plants, bushes and trees which makes for very pleasant surroundings when fishing. The mosquitoes and biting flies have not yet emerged for the most part, and temperatures continue to be mild. All in all, a perfect time of the year to enjoy time outdoors; don’t let it slip by! 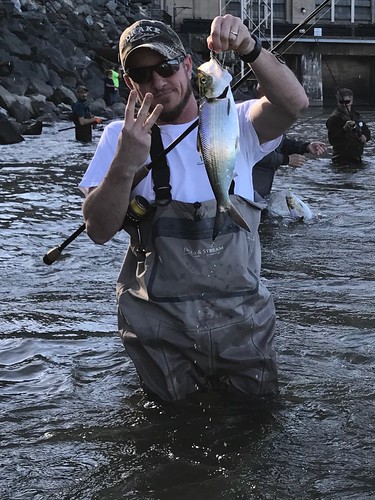 Don Goff happily holds up his third hickory shad this day, caught and released near the dam pool.

The lower Susquehanna River is beginning to warm up, and water clarity is slowly improving as water flows through the Conowingo Dam have decreased. As a result, water temperatures are now in the low 60s. Because the weather has been mild with no large rain events, Octoraro and Deer creeks are showing inviting water temperatures tempting hickory shad to ascend those creeks to spawn. Both hickory and American shad have been present in the lower Susquehanna for several weeks, and it is only now with warmer water that they are becoming more active. Reports of good catch-and-release fishing was reported this week at both spots. Octoraro Creek tends to run a little warmer than Deer Creek. Catch-and-release fishing has also been good near the Conowingo Dam pool this week.

Water clarity is slow to improve in the Susquehanna Flats area this week so catch and release fishing for striped bass continues to be slow. Fortunately much of the floating wood debris that blanketed the area as a result of spring tides has beached on windward shores making for safer boating in the region.

The upper bay region below the Brewerton Channel was, of course, busy with boats trolling along the shipping channel edges on Saturday as most fishermen were anxious to participate on opening day of the 2017 striped bass season. It was a slow day in regards to catching, which is not uncommon for the first week of the trophy  season, especially in the upper bay region. Fish were caught by a few lucky souls along the steep edges near Podickory Point, Love Point and around the Bay Bridge. Fishing success will improve in the coming weeks. 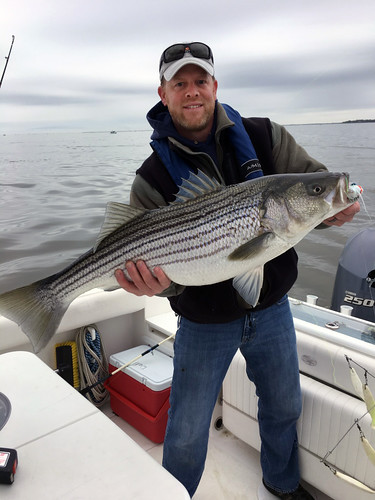 Luck was with Mike Fisher on opening day as he holds up a beautiful fish he caught near Love Point on an umbrella white bucktail combination.

In the middle bay region, it would seem that post-spawn striped bass are taking their time exiting spawning rivers. Although the bulk of spawning activity is past, there was still spawning going on in the upper Choptank, Patuxent and Potomac as late as yesterday. Generally speaking, the progression of spawning activity and fishing success out in the bay is on track. Traditionally, opening day tends to be slow and the best fishing usually occurs around the last week of April and the first week of May. As can be expected, Saturday’s reports told of the best success at first light and that success tapered off as the morning wore on. It seemed to be a toss-up which color of parachutes and bucktails caught the most fish. Surface water temperatures in the middle bay region are about 60°F today and water clarity is fairly good.

Jellyfish were a big problem for those trolling in the middle bay region, and mates and others were kept busy clearing fouled lines as they trolled along the steep edges of the shipping channel and the current breaks that occur there. Recently I’ve noticed vinyl skirted parachutes being used in the theory that they do not become bogged down with jellyfish goo like the nylon skirted parachutes. My friends tell me that they do also foul, to a lesser degree, but when they do they have to be hosed off rather than brushed out like the nylon ones. Who said it was going to be easy?

In the lower bay region, one would most likely describe the striped bass fishing as a very slow pick. Unfortunately, there were a lot of disappointed fishermen in charter and private boats. The lower Potomac tended to be slow and reports of good fishing in the catch-and-release area near Fort Washington supported the notion that a lot of the fish have not completed their cycle of spawning and heading down river into the areas below the Route 301 Bridge. There were reports of a few fish caught along the channel edge out in front of St. George’s Island and Piney Point. The channel edges at Cove and Cedar points were also slow. Patience can be a tough virtue for fishermen, but better fishing is just around the corner. 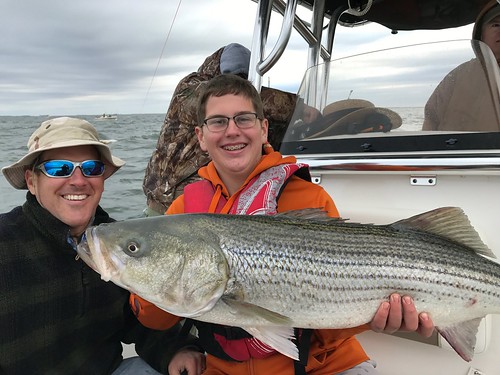 Aiden Reilly was lucky enough to catch this beautiful 41-inch specimen in Tangier Sound with his dad.

Catch-and-release fishing for hickory and American shad in many of the tidal rivers of the Chesapeake has been very good this week. Reports from the upper Choptank near Greensboro and the Marshyhope near Federalsburg have been good. Hickory shad tend to dominate the fishery, but there are just enough American shad to create more excitement. There is good catch-and-release fishing for hickory shad being reported in the upper Patuxent River. The upper tidal Potomac near Fletcher’s Boathouse has been extremely good this week. Maryland anglers are reminded that they’ll need to purchase a District of Columbia fishing license to fish above the Maryland line.

White perch are working their way down the spawning rivers and are beginning to spread out into their typical late spring/summer habitats. Small jigs, spinners and bottom rigs baited with bloodworms or grass shrimp are the way to catch them. Channel catfish are active in most of the state’s tidal rivers and crappie fishing has been very good. The tidal Potomac has an excellent population of crappie and everyone is enjoying wonderful fishing near structures such as sunken wood, marina piers and fallen tree tops.

Fishing for blue catfish has been very good in the tidal Potomac, and one does not have to be in a boat to fish for them. There are many access points in the Fort Washington area to fish from shore, which has a special appeal on warm sunny days. 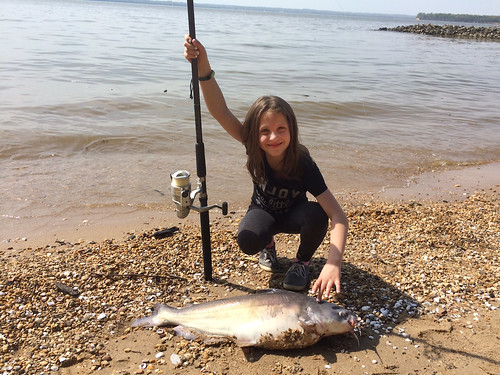 Eight-year-old Bailey Krikstan enjoyed fishing with her dad and shows off a big blue catfish she caught on a white perch cut bait.

Fishing for largemouth bass in the tidal Potomac River has been good as largemouth nose into small tidal creeks and shallow areas along the river to spawn. Covering emerging grass in the shallower transition areas with spinnerbaits, chatterbaits, shallow running crankbaits and jerkbaits as well as soft plastics are a safe bet. Northern snakeheads will be part of the equation as well, and fishermen are finding them to be a welcome additional catch.

Trout fishing in the many stocked put-and-take management waters continues to take center stage for many fishermen this week. Often many of such areas are close to home. Stocking crews continue to work at a grueling pace to get trout placed at your favorite location. Those stockings are posted by early afternoon each day. The stockings can be viewed on the trout stocking website or by receiving notice via the email subscription service.

Largemouth bass are beginning to spawn in some of the warmer water ponds and impoundments in the southern, central and eastern regions this week or close to it. Most bass fishermen know that the possession of largemouth bass is, of course, prohibited from March 1 – June 15 in nontidal waters, so bass should be handled carefully. The tidal rivers of the Eastern Shore hold good populations, and they can be found holding near the shallower spawning flats and feeder creeks. Crappie and bluegill fishing has been very good in these same areas, and the tidal rivers of the Middle and lower Eastern Shore hold populations of northern snakeheads. 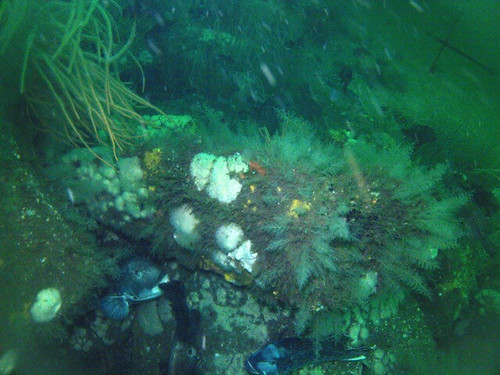 Captain Monty Hawkins sent us this intriguing picture of a tautog peering out of its hideaway and a sea bass hovering nearby.

As the water warms in the coastal areas of Ocean City, fishing is steadily improving. Water temperatures near the Inlet are approaching 49°F this week. The first reports of tautog caught there came in over the weekend, and fishing will only improve this week. Bottom rigs baited with green crab pieces or sand fleas are the most popular baits, and slack tide is often one of the better times to fish for them. If you have a boat, it is pretty hard to beat fishing at the South Jetty. If you’re shore-bound, the bulkhead from 2nd to 4th Streets, the North Jetty or the Route 50 Bridge are good places to fish.

Surf anglers are catching a few short striped bass, and both clear-nosed skates and spiny dogfish are keeping everyone busy. In the back bay areas, there is plenty of action with striped bass that are less than 28 inches in length. Casting a variety of lures near prominent sedge islands and the Route 90 Bridge have been good places to get in on this catch-and-release action.

The tautog fishing on the offshore wreck and reef sites has been good. There are limit catches by some anglers, while others tend to scratch out only a couple of fish.

There is only one theory about angling in which I have perfect confidence and this is that the two words, least appropriate to any statement, about it, are the words “always” and “never.” -Lord Grey of Fallodon, 1899

ABOUT THE AUTHOR Keith Lockwood has been writing the Fishing Report since 2003 and has had a long career as a fisheries research biologist since 1973. Over the course of his career he has studied estuarine fishery populations, ocean species, and over a decade long study of bioaccumulation of chemicals in aquatic species in New Jersey. Upon moving to Oxford on the eastern shore of Maryland; research endeavors focused on a variety of catch and release studies as well as other fisheries related research at the Cooperative Oxford Laboratory. Education and outreach to the fishing public has always been an important component to the mission of these studies. Keith is an avid outdoorsman enjoying hunting, fishing, bird dogs, family and life on the eastern shore of Maryland.