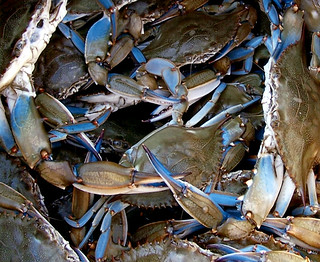 The Maryland Department of Natural Resources today released the results of the 2017 Blue Crab Winter Dredge Survey, which shows that the population of crabs remains resilient and steady.

While the survey indicates the population has slightly decreased due to lackluster recruitment, it showed a surge in spawning-age female crabs to the highest level recorded in the 28-year history of the baywide survey.

Blue crab reproduction is naturally highly variable due to the complex life cycle of the animal. Tiny, larval blue crabs spend the first part of their lives in the Atlantic Ocean and rely heavily on favorable currents, temperatures and winds to bring them into the Chesapeake Bay, where they grow. Optimal conditions do not occur every year, so a decrease in the number of young crabs this year was neither unexpected nor unprecedented.

“Despite the modest number of young crabs, the total population remains stable and the number of spawning age females – a major scientific benchmark for the health of the species – rose,” Fishing and Boating Services Director David Blazer said. “This is testament to the state’s adaptive and effective management of the fishery.”

The overall population of crabs was estimated at 455 million, the 11th highest level recorded by the survey. The spawning female stock increased 31 percent, from 194 million to 254 million, exceeding the healthy target level of 215 million for the first time since 2010. While the adult female segment increased, the adult male stock decreased 16 percent. The healthy abundance of adult crabs in the Chesapeake Bay bodes well for crabbers in the first half of the 2017 crabbing season (April-July). When the young crabs begin to enter the fishery in midsummer, their scarcity may result in more challenging conditions later this year and next.

The 2016 baywide crab harvest increased for the third consecutive year for a total harvest of just under 60 million pounds. The Maryland harvest was a bit over 30 million pounds; it continues to operate at sustainable levels. Adhering to the current management strategy of maintaining a steady harvest rate should keep a measure of resiliency in the population and allow for good recruitment when environmental conditions are more favorable. “We will now discuss the survey results with the Blue Crab Industry Advisory Committee and Tidal Fisheries Advisory Commission to determine next steps,” Blazer said. “Any adjustment, be it catch limit or season length, will only be considered after we receive input from all parties involved.”

The Winter Dredge Survey has been conducted annually by the Maryland Department of Natural Resources and Virginia Institute of Marine Science since 1990 to provide the primary assessment of the Chesapeake Bay’s blue crab population. The fishery is managed cooperatively by Maryland, Virginia and the Potomac River Fisheries Commission.

In the survey, biologists use dredge equipment to capture, measure, record and release blue crabs at 1,500 sites throughout the Chesapeake Bay from December through March. Crabs tend to bury in the mud in the winter, which makes it possible for scientists to develop accurate estimates.

The Chesapeake Bay Stock Assessment Committee is currently reviewing the survey results and plans to release a full analysis later this summer.