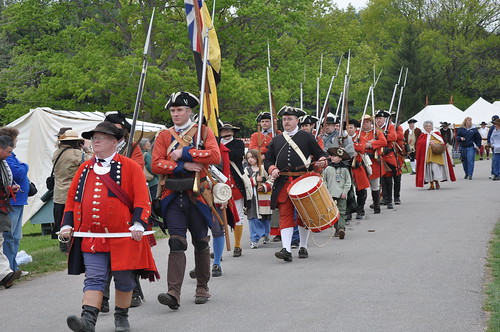 History buffs of all ages are invited to travel back in time to an authentic colonial market fair at Fort Frederick State Park in Washington County, April 27- 30. The park is located at 11100 Fort Frederick Road in Big Pool.

The Fort Frederick Market Fair features the best artisans, craftspeople, entertainers and sutlers together with an 18th century encampment alongside the park’s historic stone fort, originally built in 1756 during the French and Indian War.

“Through their attendance and portrayals of life as it was in the 1700s, our event participants demonstrate the flavor of an 18th century market fair for all to enjoy,” said Jenifer Scarisbrick, president of the Friends of Fort Frederick State Park. “This event is a wonderful opportunity to increase one’s knowledge of the French and Indian War, and the role that the historic fort played in that conflict and in protecting the Maryland frontier.”

The fair runs 9 a.m. to 5 p.m. each day. There is free entertainment throughout the event and a fundraising auction Saturday to benefit the Friends of Fort Frederick State Park. The event is hosted by the group and the Maryland Park Service. Cost: Adults $5; ages 6 – 12 $2; and 5 and under attend free.