Spring conditions throughout Maryland are presenting wonderful fishing opportunities as water temperatures steadily warm up and all manner of fish become more active. Except for some low-flow conditions in a few areas, the opening day of the traditional trout season was a big success with beautiful weather and plenty of trout. Parents and children all had a wonderful time sharing in a meaningful experience together. Many children caught their first fish. For many, whether it was their first trout or one of many over the years, it was all good fun. 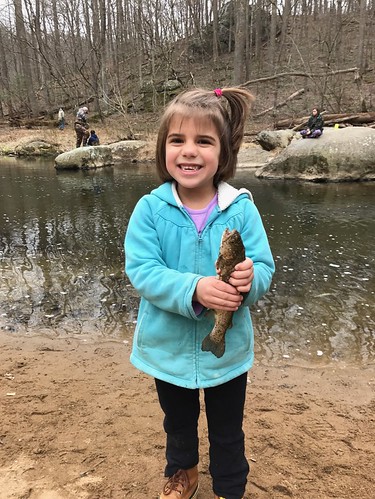 This youngster is all smiles with her first trout on the Little Gunpowder while fishing with her dad. Courtesy of David Richard.

Reports from the lower Susquehanna River this week tell of stained water conditions and temperatures around 40°F. Farther south and in shallow waters out on the flats, water temperatures can be as high as 46°F on sunny days. A forecast of rain later on this week and continued snow melt in the Susquehanna watershed will probably keep water temperatures depressed for the remainder of the week. Crankbaits and jerkbaits with rattles inside might be one of the better choices for casting under stained water conditions; swimbaits are another good choice when fishing for striped bass in the Susquehanna Flats. Since this is a catch-and-release fishery, mashing down the barbs on hooks or filing them down will go a long way in quickly releasing fish.

White perch are still providing plenty of entertainment in the upper bay tidal rivers and creeks. Water temperatures are in the upper 40s in most areas, and fishing continues to be good. Post-spawn white perch are becoming a more common catch this week mixing in with the pre-spawn perch. Shad darts, small jigs and bait such as minnows and worms have been popular choices. Crappie are being found in the same areas and can add a substantial portion to the catch. Channel catfish are very common in the upper bay tidal rivers and can be caught on worms or cut bait. 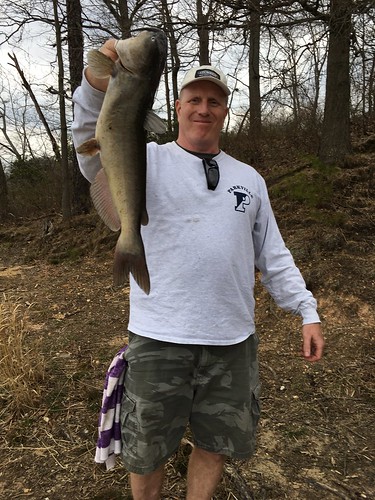 Courtesy of John Horgan, holding up a nice channel catfish he caught in Bush Creek while fishing with cut bait.

Water temperatures in the middle and lower bay regions are holding around 46°F this week. Windy conditions have kept most off the more open waters of the bay recently, but calmer conditions will most likely bring out a few catch-and-release fishermen this coming weekend. Most will be jigging in order to enjoy the best part of catch-and-release fishing rather than trolling. Whichever  you use, be sure you use heavy enough tackle followed by a quick release.Those who will be out trolling all manner of parachutes, bucktails and umbrella rigs will no doubt run into lion’s mane jellyfish during this year’s Spring Trophy Striped bass season. These jellyfish begin their life cycle in the bay in late fall and develop into adults over the winter. They have an orange-brown center, short tentacles and are about 6 inches in diameter this time of the year. They begin their exit down the bay now, and usually by May they are gone from the Maryland portion of the bay. Clearing fouled lines is a chore and often it is a busy cockpit that tends to have the best success when it comes to trolling.

Fishing for white perch continues to offer bountiful fishing opportunities in the upper reaches of the tidal rivers in the middle and lower bay regions. Water temperatures are in the mid 50s in most areas. Although the white perch continue to spawn, this may be the last week of major spawning activity, and recent catches have been a mix of post- spawn and pre-spawn. In many cases, finding a spot with a deep hole can lead to the best catches of decently sized fish. Small jigs and shad darts are a favorite and minnows and worms on work well also.

Hickory shad are starting to show up in the upper reaches of tidal rivers such as the Choptank River and can offer some fun catch-and-release opportunities. The area of Red Bridges between Greensboro and Goldsboro is always a great place to fish for both white perch and hickory shad. Shad darts tend to be one of the better choices when fishing for hickory shad. 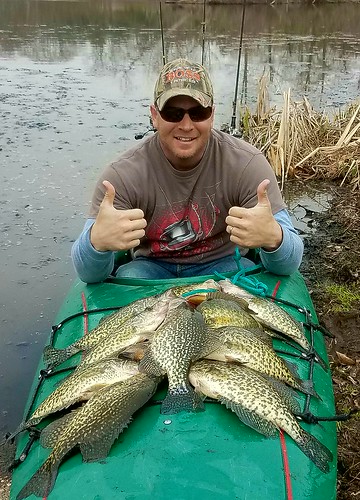 Courtesy of Jay Yesker, who shows what is possible when working a small jig under a float near structure for crappie.

Crappie fishing has been very good recently in the upper reaches of the tidal rivers throughout the state, and also in ponds and reservoirs. The crappie tend to be holding near sunken brush or similar structure such as marina docks and fallen tree tops. Slowly working small jigs or minnows under a slip bobber around some of this type of deep structure is a proven way to catch crappie and where there is one there is usually more.

After Saturday’s traditional opener of closure 1 and 2 trout management waters, Maryland’s trout fishing season is in full swing this week. Stocking crews are out working overtime to keep the flow of trout coming in the many put-and-take areas. There have been some adjustments due to low flow conditions in some waterways such as the lower Gunpowder River and other areas saw trout moving from stocking locations to find suitable water depths to their liking. All in all, it was a beautiful day for the opener with balmy weather and plenty of smiling kids and happy parents. Trout fishermen can obtain notice of current stocking on the day they occur by checking the trout stocking website or by receiving notice on the Fisheries subscription service. The stockings are usually posted by mid-afternoon of the day they are completed. 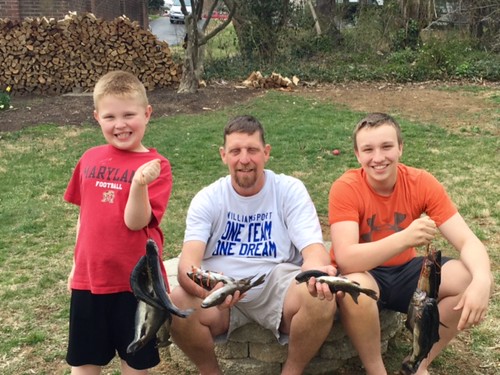 Brothers Matthew and Ryan got to go trout fishing with dad at Fishing Creek. Courtesy of Shirley Bishop

The upper Potomac River is a little high but in good shape for fishing. Rain fall later on this week may cause water levels to increase further, so it pays to keep an eye on weather conditions. At present, fishing for smallmouth bass has been good and tubes tend to be the lure of choice. Walleye fishing has also been good.

Fishing for largemouth bass has been very good in the ponds, reservoirs and tidal waters and will only imporve as the bass respond to warmer water temperatures and actively feed. Water temperatures are generally in the mid 50s in most areas and largemouth bass are holding in transition areas leading up to the shallower spawning areas. They tend to be holding near sunken wood and some of the emerging grass beds. Spinnerbaits are a great lure to use when trying to cover territory and when targeting sunken wood; soft plastics are hard to beat. 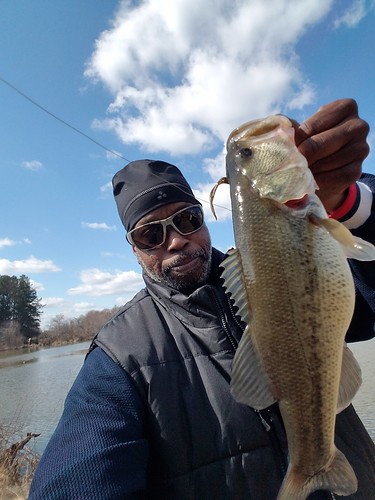 Travis Franklin sent in this picture of a Lake Allen largemouth bass he caught recently.

The coastal waters in the Ocean City area are slowly beginning to warm up. Currently, nearshore water temperatures are about 43°F. Before long, tautog will begin to move into the inlet area and provide some shoreline fishing opportunities. In the meantime there has been some catch-and-release action for striped bass in the back bay areas near the Route 90 Bridge. Most of the striped bass being caught are under 28 inches in length but do provide some fun fishing opportunities. Swimbaits and bucktails tend to be the best choices when fished near the bottom.

Offshore fishing is focused mostly on tautog near the wreck and reef sites. The charter and head boats are reporting fair to good catches most days.

“There is no substitute for fishing sense and if a man doesn’t have it, verily, he may cast like an angel and still use his creel largely to transport sandwiches and beer.” – Robert Traver