“I was fishing from a boat with my stepdad and sister, casting a white Twister Tail jig into the shadows of fallen trees along the bank of the creek, when the fish took the bait, and I knew it was big,” Timmons recounted of the July 30 catch.

Timmons decided to have it weighed as a potential record, and the certified scale at the Martin Fish Market in Ocean City proved the weight to be 1.65 pounds. Maryland fisheries biologist Steve Doctor subsequently inspected and confirmed the species. The 14 ½-inch fish exceeded the previous Atlantic record of 1.2 pounds set in 2015 by Finn McCabe, who also caught his fish in Ayers Creek. 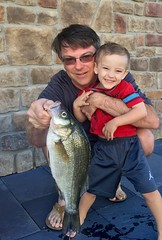 “We were trolling Shad Rap crank baits and catching them pretty well when this one came over the rail, and I thought it looked bigger than the one from a couple of years ago,” Stiars recalls. “I’m sure there’s an even bigger one in there.”

Stiars fishes Loch Raven two or three times a week in warm weather. His previous record was a 1.70-pound fish caught in 2014.

The department maintains state records for sport fish in four divisions – Atlantic, Chesapeake, Nontidal and Invasive – and awards plaques to anglers who achieve record catches. To report a potential record catch, please call 443-569-1381 or 410-260-8325. Anglers should keep their fish immersed in ice water to preserve its weight until it can be checked, confirmed and certified. Please note: Fish caught from privately-owned, fee-fishing waters are not eligible for record consideration.