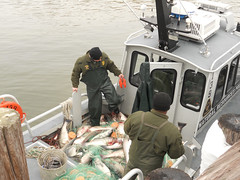 Two Talbot County watermen convicted of poaching and selling nearly $500,000 of striped bass over four years have received lifetime bans from taking part in that fishery by the Maryland Department of Natural Resources.

Michael D. Hayden Jr. and William J. Lednum, both of Tilghman Island, have received lifetime revocations of their striped bass privileges and been suspended from all commercial fishing activity for the next year, followed by a four-year probationary period in all other fisheries. Their striped bass allocations are being returned to the commercial fishery allotment.

“The department has acted to protect the species as well as the interests of those who rely on the striped bass fishery for their livelihood,” Natural Resources Secretary Mark Belton said. “This action, though rare, was taken only after all the evidence was fully considered and after the individuals admitted fault. We hope this sends a strong signal to poachers that the state is serious about protecting the fishery.”

Hayden and Lednum remain responsible for $498,000 in court-ordered restitution to the state of Maryland.

The investigation of the two men began in February 2011, when the Maryland Natural Resources Police found tens of thousands of pounds of striped bass snagged in illegal, anchored nets off Kent Island before the season officially opened. The discovery led to a temporary shutdown of the commercial season by state officials.

Investigators from Natural Resources Police and the U.S. Fish and Wildlife Service developed evidence, which showed that beginning in 2007, Hayden and Lednum shipped and sold at least 10 tons of striped bass – worth $498,293 – to wholesalers in New York, Pennsylvania, Delaware and Maryland. None of the fish were properly reported.

After being indicted in 2013 by a federal grand jury on 26 counts of conspiracy and violating the Lacey Act, Hayden and Lednum entered into plea agreements, where they admitted to using illegally weighted and/or anchored gill nets, leaving the nets in the water overnight, and setting the nets during times when the commercial striped bass gill-netting season was closed. Further, they admitted they falsified the permit allocation cards and daily catch records for their fishing trips to over-report the numbers of striped bass caught and under-report the weights. This allowed them to request additional state tags under false pretenses.