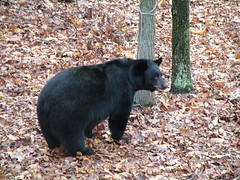 The Maryland Department of Natural Resources would like to alert citizens that juvenile black bears have been seen wandering through the state’s more suburban areas this spring. There have been recent, confirmed bear sightings in Baltimore, Howard, Montgomery, and Prince George’s counties as juvenile bears disperse, or seek out a new territory.

“The department has monitored black bears traversing suburban Maryland every year for more than a decade,” Wildlife and Heritage Service Director Paul Peditto said.“This is completely normal behavior and indicative of a growing and thriving species in the state.”

“Bears generally travel through these areas each spring and summer before quickly returning to more suitable habitats,” Peditto said. “Most of these bears are young animals looking to find territory to call their own. They will quickly move on to more rural communities.”

While Maryland is home to a healthy black bear population in four western counties (Allegany, Garrett, Frederick, and Washington), dispersing bears have been sighted in all counties west of the Chesapeake Bay in recent years. Sightings in the state’s more suburban areas tend to peak during June and July but may occur as late as September,

“Please treat bears the same as you would any wild animal,” Bear Project Leader Harry Spiker said. “Give them plenty of space and allow them to move on at their own pace. If a bear has been spotted in your neighborhood, please take down bird feeders and secure trash cans so that the bear does not get an easy meal, which may prolong their visit to your neighborhood.”