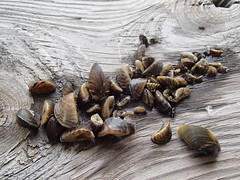 The Maryland Department of Natural Resources has confirmed the presence of zebra mussels, an invasive species of shellfish, attached to the propeller and outboard motor of a pontoon boat attempting to launch at Deep Creek Lake State Park. Launch stewards, conducting voluntary boat inspections, identified the mussels earlier this month on a vessel last used on the Monongahela River, where zebra mussels are established. The stewards were able to intercept the boat prior to launch, and removed all visible zebra mussels for examination and inspection.

“Through our efforts, we were able to successfully prevent the introduction of an aquatic invasive species into Deep Creek Lake,” Natural Resources Secretary Mark Belton said. “While we were successful this time, we need every Marylander to remain attentive and vigilant as they transport themselves, their equipment and their vessels from one body of water to another.”

Zebra mussels are small, filter-feeding bivalves native to the Black and Caspian seas that were introduced into the Great Lakes in the mid-1980s. Since then the species has spread throughout the Midwest, Northeast, and parts of the western United States. The spread of zebra mussels has caused profound economic and environmental damage as they colonize hard surfaces in high densities affecting industrial and public equipment, and altering aquatic ecosystems and habitat. 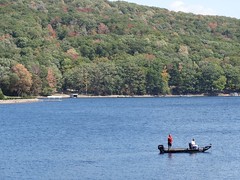 The mussels were intercepted as part of the Deep Creek Lake Launch Steward Program. The program, funded by the Maryland Park Service, is a cooperative partnership with Garrett College aimed at increasing public awareness of the threats posed by aquatic invasive species and reducing the risk of their introduction into the lake. Since the program began in 2014, stewards have offered voluntary inspections of boats and trailers, and disseminated information on steps boaters can take to reduce the risk of spreading invasive species.

The threat of zebra mussels entering Maryland waterways emphasizes the important role recreational anglers, boaters and others play in preventing the introduction and spread of aquatic invasive species.