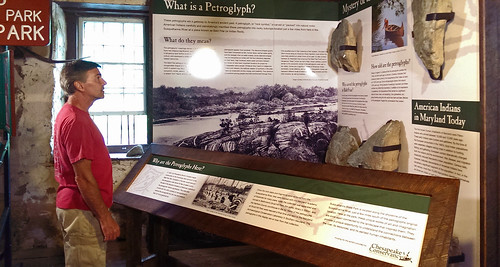 Starting May 14 at Susquehanna State Park, visitors can view a collection of ancient, carved rock fragments, known as the Bald Friar Petroglyphs. These storied stones, which are thought to have been carved by American Indians, were once part of an historic island-sized boulder that parted the waters of the Susquehanna River.

“We were honored to work on the development of this petroglyph exhibit and to display these mysterious stone relics,” Maryland Park Service Superintendent Nita Settina said. “There is an important need to provide greater opportunities to showcase Maryland’s American Indian history for our visitors to contemplate and enjoy.”

Featuring a variety of geometric shapes and designs, the history and meaning of the petroglyphs is still a matter of some debate.

“Their former position in the river ─ between its lowest ford and deepest sink ─ may suggest that their meaning and placement wasn’t random,” Maryland State Terrestrial Archaeologist Charlie Hall said. “Even the period when they were carved is unknown, with theories ranging from hundreds to thousands of years.”

The limited understanding of the petroglyphs could possibly be attributed to more recent history. In 1927, prior to the Conowingo Dam’s completion, a team of would-be historians from the Maryland Academy of Sciences attempted to save the stones from the water’s rise. They set dynamite charges and blasted the boulder known as Indian Rock into more portable fragments. Though some of the carvings were lost, many were salvaged and put on display at the academy’s headquarters in Baltimore.

Years later, some were moved to Druid Hill Park and later still, some were loaned out to county museums. In 2006, Hall became concerned over the long-term well-being of the precious artifacts.  He collected the remaining stones and moved them to the state’s archaeological conservation lab until a more suitable home could be found.

Last year, the Maryland Department of Natural Resources and the Maryland Historical Trust partnered with the Chesapeake Conservancy to bring the stones to their new home at Susquehanna State Park, closer to their original location. Their presence is complemented by an interpretive display financed by Turney McKnight, a conservancy board member with a personal interest in the petroglyphs.

The exhibit, located in Susquehanna State Park’s Rock Run Grist Mill, is open on Saturdays and Sundays May 14 through the end of September from 10 a.m. to 6 p.m.  For more information, please call 410-557-7994.