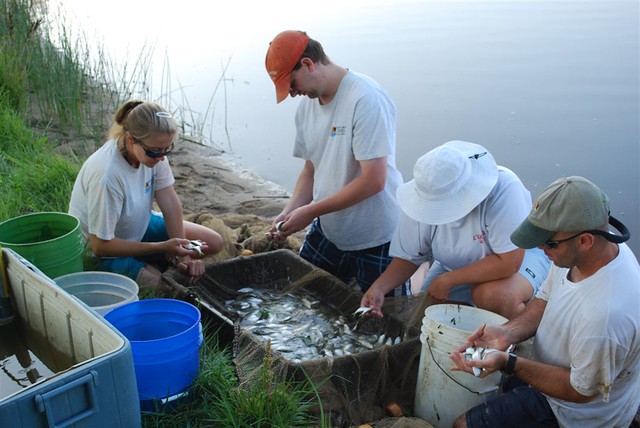 The Maryland Department of Natural Resources (DNR) announced today that the 2015 striped bass juvenile index is the eighth highest on record. The survey, a measure of spawning success, found an average of 24.2 juvenile fish per sample, approximately double the long-term average of 11.9.

“This year’s survey demonstrates that striped bass are a very resilient species when given favorable environmental conditions for reproduction and survival,” DNR Secretary Mark Belton said. “The robust reproduction should give Maryland anglers hope for a successful striped bass season in a few years time.”

The survey also documented healthy reproduction of other species. DNR fisheries biologists counted record numbers of juvenile American shad, which have been under a harvest ban in Maryland since 1980. The white perch juvenile index was the third-highest on record.  River herring reproduction was also above average.

The annual survey is conducted throughout the summer to track the reproductive success of Maryland’s state fish. Annual reproductive success can be highly variable due to environmental factors, such as water temperature, precipitation and river flow. This year, DNR collected more than 70,000 fish of 50 different species, including 3,194 young-of-year (less than one year of age) striped bass in 132 sweeps of a 100-foot beach seine at 22 sites.

DNR has monitored the reproductive success of striped bass and other species in Maryland’s portion of the Chesapeake Bay every year since 1954. The present day survey covers sites in the four major spawning systems—the Choptank, Potomac and Nanticoke rivers, and the Upper Bay. Biologists visit each site monthly from July through September to collect samples.

The Virginia Institute of Marine Science conducts a similar survey in Virginia’s portion of the bay, which can be viewed here.