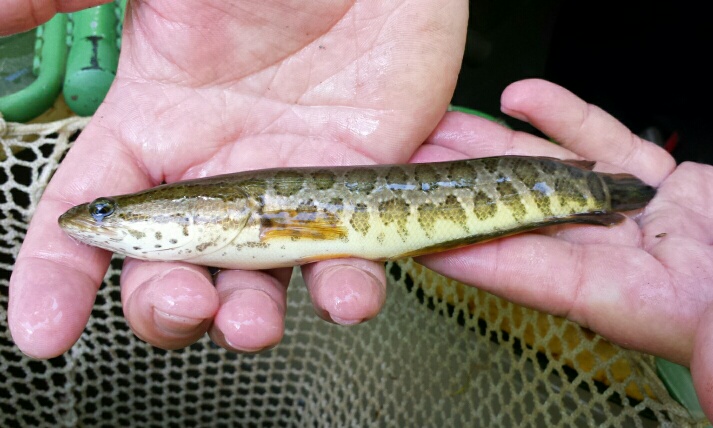 Biologists found a juvenile snakehead in the C&O Canal

Spreading to the Upper Potomac via the C&O Canal

Credible reports of snakehead sightings and results from a Maryland Department of Natural Resources and U.S. Fish & Wildlife Service survey indicate that the non-native snakehead species has spread into the C&O Canal and thereby the Upper Potomac River.

Last fall, anglers reported catching two northern snakeheads between mile marker 19 and 22 in the C&O Canal. Following the reports, biologists from the agencies surveyed about eight miles of the canal between Great Falls and Violettes Lock, and found a seven-inch juvenile snakehead. Subsequently, a park visitor photographed an adult northern snakehead guarding a school of fry in the same section of canal.

These discoveries validate concerns that this non-native species could gain a foothold in the non-tidal Potomac River above Great Falls, a site where it had never before been reported.

First discovered in the tidal Potomac River watershed in 2002, the northern snakehead fish is now firmly established in the Patuxent River, and has spread to other fresh and low-salinity tidal waters in Maryland and Virginia.

There are many sources of water exchange between the canal and the Potomac, particularly during flood events, and it is nearly certain that the species has now gained access to the Upper Potomac River.

“Eradication is not possible once these fish become established in an open river system such as the Potomac,” said DNR inland fisheries biologist John Mullican. “We expect that these fish will eventually become a permanent part of the Upper Potomac fish community. Confronting snakeheads in the canal system is the best way to mitigate their emigration into the Upper Potomac.”

DNR, the U.S. Fish and Wildlife Service, and the National Park Service are developing programs to monitor and control the abundance of snakeheads in the canal system.

Fishing pressure in the tidal Potomac River has been effective in reducing the growth of the snakehead population. DNR asks anglers to enjoy pursuing, catching and removing Maryland’s three most troublesome invasive fish—snakeheads, blue catfish and flathead catfish by any legal method. There are no seasonal, size or creel limits for these three invasive species in Maryland.

DNR also asks anglers to report any snakeheads caught from the C&O Canal or Potomac River upstream of Great Falls to fishingreports.dnr@maryland.gov, and to please include a photo and detailed description of the capture location including GPS coordinates, if possible.

It is a violation of  Maryland and Virginia laws as well as the federal Lacy Act to possess, import, or transport live northern snakeheads, punishable by fines up to $250,000 and five years in prison.

To raise awareness and help control the population spread of invasive fish, DNR added an Invasive Species Award category to its annual Maryland Fishing Challenge. Qualifying fish must be caught using legal recreational fishing methods, including rod and reel, bow and arrow, trotline, jugs, and spear. The fish must also be killed.

There are three ways to qualify: